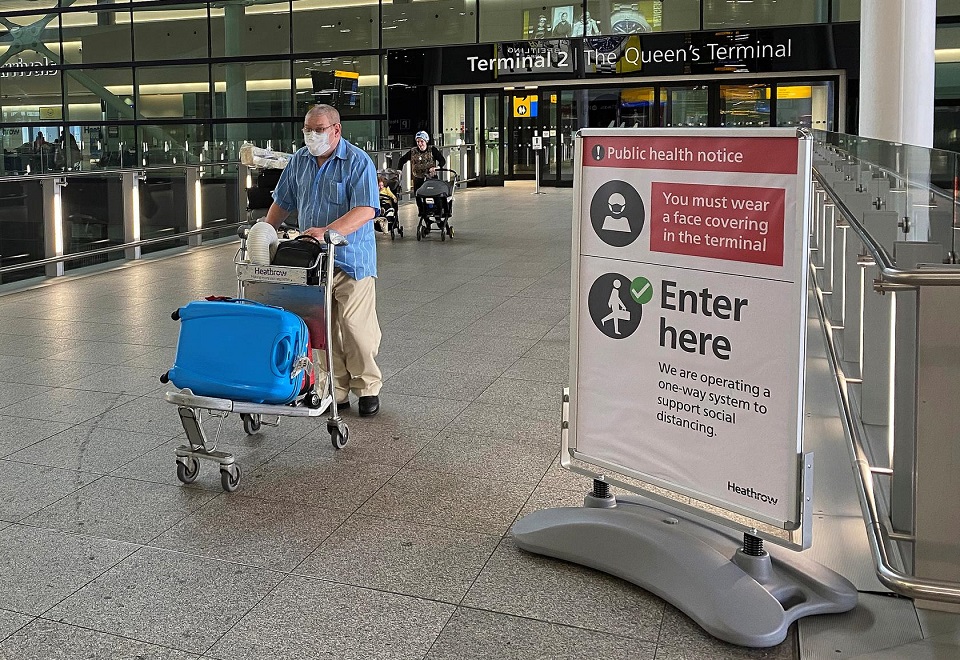 FILE PHOTO: A passenger walks through a terminal at Heathrow Airport, as Britain launches its 14-day quarantine for international arrivals, following the outbreak of the coronavirus disease (COVID-19), London, Britain, June 8, 2020. REUTERS/Toby Melville

LONDON, July 4: Britain will end coronavirus quarantines for people arriving in England from more than 50 countries, including Germany, France, Spain and Italy - but not the United States - the government said on Friday.

The move, effective July 10, clears the way for millions of British tourists to take summer holidays without worrying about being quarantined when they return. Those arriving from higher risk countries will still have to self-quarantine for 14 days under a rule which has angered airlines and travel companies.

Prime Minister Boris Johnson’s government had debated for days how to ease the quarantine rules. Scotland, Wales and Northern Ireland, which set their own health policies within the United Kingdom, have not announced plans to lift the measures.

As the spread of the novel coronavirus slows in Europe, countries are reopening travel after more than three months of lockdown.

Australia, New Zealand and Japan are included, as are Caribbean tourist destinations such as the Bahamas and Barbados, but popular holiday destination Portugal was not on the list. Nor were the United States, China, India or Russia.

“The U.S. from a very early stage banned flights from the UK and from Europe so there isn’t a reciprocal arrangement in place,” Shapps said.

Britain’s foreign ministry also set out exemptions from a global advisory against “all but essential” international travel, from July 4, a key to normal insurance being valid.

The government said it expected countries included on the quarantine-free list to reciprocate by relaxing their own restrictions.

The move to ditch the quarantine prompted three of Europe’s biggest airlines, British Airways, Ryanair and easyJet to end a legal challenge against the government.

Britain, with the highest COVID-19 death toll in Europe, is slowly reopening its economy. England and Northern Ireland will reopen pubs this weekend, and Scotland and Wales are expected to follow later in July.

Johnson has warned people to maintain social distancing rules and is expected to repeat that caution at a news conference on Friday.

“Anyone who flouts social distancing and COVID-secure rules is not only putting us all at risk but letting down those businesses and workers who have done so much to prepare for this new normal,” he will say.

In Pictures: Oli meets May

Prime Minister moving to new residence with bunkers
44 minutes ago