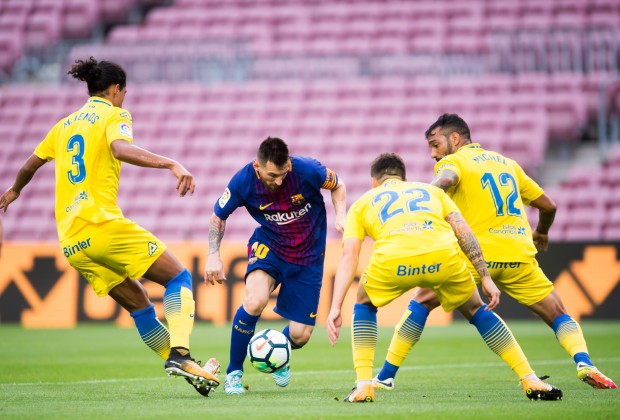 MADRID, Oct 13: Barcelona, who travels to Madrid this week, fresh from the recent referendum they contested on October 1, will play Atletico Madrid on Saturday at the new Wanda Metropolitano Stadium, in the eighth round of fixtures of the La Liga Santander 2017-18.

This match will hold a very big place in Spanish football. Atletico Madrid will represent the entire Spain excluding Catalonia, while Barcelona will epitomize the other part of the country in this pulsating fixture.

Barcelona has won all its game after playing seven games and is at the top of the table with 21 points, while Atletico is fourth with 15 points and Real Madrid in fifth with just a point short.

Barcelona, who played Las Palmas at the Camp Nou on the referendum day, won 3-0 but not in some style. Barca played in an empty stadium, keeping in mind the safety of the supporters. Sergio Busquets and Lionel Messi scored the goals for Barcelona which took them to the top of the table, given the fact that Real Madrid had to face Espanyol, the other Catalan side in the late kickoff.

The Catalan side would want to win this game, not only to extend the winning run, but to raise a voice against the Spanish government. Real Madrid earlier travels to the Coliseum Alfonso Perez Stadium in Getafe, the same stadium where Getafe scored the first goal against Barcelona, but lost 1-2. A win for Real will take them to the second position with 17 points, regardless of the results of second placed Sevilla, third placed Valencia, and Atletico.

Team News
It was confirmed that Barcelona’s Rafinha would stay out of action for at least four months, with Ousmane Dembele not to play until Mid-January. Andres Iniesta and Luis Suarez are doubtful with Hamstring and Knee injuries respectively, but Iniesta was given the green signal to be a part of the Atletico match. Iniesta got injured in the Las Palmas match, while Suarez on his international duty against Bolivia, while taking his Uruguayan team to Russia for the World Cup 2018.

Nelson Semedo, Gerard Deulofeu and Samuel Umtiti didn’t feature at all in Barcelona’s last match, so we expect them to start this highly anticipated Atletico clash. Paulinho and Sergio Busqeuts started in the last match, and they will likely rest, given the fact that they played for their respective countries in the World Cup qualifiers as well. Busqeuts is said to be injured in his last outing, however, we can’t confirm this.

Sergi Roberto, who started against Las Palmas, would make way for either Semedo or Aleix Vidal, in either RW or RB positions. Lionel Messi, Luis Suarez and Mats Andre Ter Stegen would start again despite playing for their countries in the last qualification matches.

Atletico, however, will be without Augusto Matias Fernandez and Sime Vrsaljko with knee injuries, Filipe Luis and Lucas Hernandez with hamstring problems.

Atletico's talisman Antoine Griezmann, who was subbed off in 67th minute which it drew 0-0 against Leganes last time out, will likely play against Barcelona while midfielders Koke and Saul Niguez will start again.

Head-to-head
In the last 24 meetings between these two sides, Barcelona has emerged victorious in 15 occasions, while Atletico has won two and seven have ended in a draw.

The last six meetings between these sides have been three Barcelona wins, which it won 2-1 in all three games, with two 1-1 draws and a 2-0 win to Atletico Madrid.

In the Champions League quarterfinals of 2015-16 season, Barcelona won the first leg at home by 2-1 while the second leg was a 2-0 Madrid win, sending them to the semi-finals, only to lose 5-3 on penalties against Real Madrid in the final.

In the Copa del Rey semi-finals of 2016-17 season, Barcelona won the the first leg by 1-2 at the Vicente Calderon Stadium, while the second leg was a 1-1 draw.

Recent form
Lionel Messi has scored 11 goals so far in La Liga this season, with two coming in the last match against Las Palmas. Valverde will again be looking for a win, but this time it’s not against any small side, but Atletico Madrid, his biggest test so far this season in the league as the Barca boss.

Barcelona knows what to expect against Guardiola's City