Barcelona hoping to tidy up some lost grounds against Celta 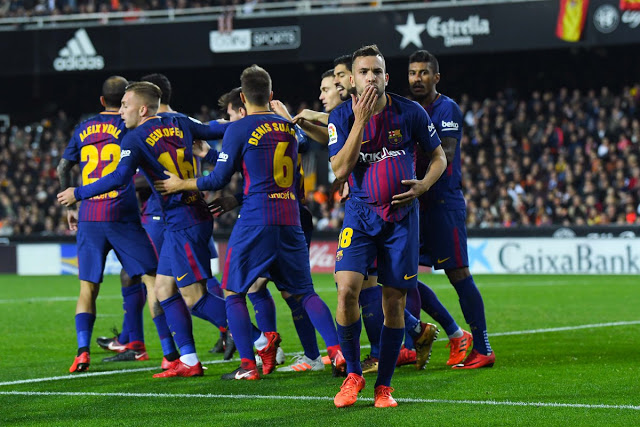 KATHMANDU, Dec 1: Barcelona and Celta Vigo on Saturday will take on each other in the 14th rounds of fixtures in La Liga with Barcelona hoping to extend their lead at the top of the table by seven points, before second-placed Valencia travels to Getafe on Sunday and fourth-placed Real Madrid go to the San Mames to play against Athletic Bilbao earlier the same day. Third-placed Atletico Madrid invites Real Sociedad on Saturday as well.

Barcelona and Valencia shared a point after drawing 1-1 at the Mestalla which provided a controversial decision when Lionel Messi’s shot was disallowed, despite the ball clearing the line. The match saw Barca getting more creative and often haunting the Valencia defense, but the Catalan side could not break through it in the first half. Barca conceded the first goal just at the hour mark when Ivan Rakitic’s poor positioning and leaving Nelson Semedo to deal with two players in the right helped Rodrigo score in the match. Barca leveled the score through Jordi Alba in the 82nd minute with a sublime long through ball from Messi.

Barcelona dominated the match from the start. They had 69.5% possession to just 30.5% of Valencia. Barca had 12 shots with eight of them on target while Valencia had nine shots and just one on target which was the goal. Barca dominated the entire match, but could not get a breakthrough which all goes down to how superb Valencia’s goalkeeper Neto was. He saved seven times in the match, including an outside-the-box volley from Luis Suarez.

Often-criticized Rakitic had an okay game. Though he was not that bad, he was faulty for the goal Barca conceded. His positioning left Semedo marking Goncalo Guedes, but the Portuguese could not deal with Jose Gaya, when he lurked near the right side of the danger area and crossed it to Rodrigo, who scored his eighth goal of the season.

Barcelona also faced Real Murcia in the second leg in the Camp Nou on Wednesday which they won 5-0 having defeated them 3-0 in the Copa del Rey's first leg of the round of 32. Francisco Alcacer, Gerard Pique, Aleix Vidal, Denis Suarez scores and Jose Arnaiz, the only B-team player to have scored goals in two legs against Murcia.

Denis had an excellent game. He played the whole 90 minutes in which he scored a goal and provided an assist to Arnaiz for the fifth Barcelona goal. He was very confident with the ball and dribbled past 5-6 players on several occasions, playing one-to-one with Carles Alena and Oriol Busquets, and providing some good crosses for the forwards.

Team news
Barcelona will still be without Argentina defender Javier Mascherano, who is sidelined until mid-December after suffering a hamstring injury in the international break against Nigeria. The center back joins the casualty list of Rafinha who is out with a meniscus injury, Arda Turan with an ankle injury, new signing Ousmane Dembele with a hamstring problem.

Sergi Roberto, who returned from his hamstring injury and played the last 20 minutes against Murcia and provided a wonderful through ball to Denis, is included in the squad list along with Andre Gomes, who was also out with his thigh injury.

Pique, who was suspended for the Valencia clash returns while Denis, Alcacer, Vidal and Lucas Digne are also included in the squad list for Barcelona. But, if Samuel Umtiti gets a booking, he’ll be suspended against Villareal.

Barcelona might start with Roberto in the right back role as Nelson Semedo is left out while Pique and Umtiti might as well get started, but Vermaelen can play against Celta given the fact that Umtiti is just a card away from suspension. Jordi Alba might start the match as Digne had featured against Murcia.

Barcelona’s midfield might be the same again as the Valencia clash with Busquets, Paulinho, Rakitic and Iniesta, but Denis might get a start in the match as he performed very well as a substitute against Valencia and against Murcia.

Barcelona will surely start with Lionel Messi while Vidal and Suarez might get to start the match. Deulofeu is left out of the squad list, so Vidal may start.

However, Celta may start with Ruben Blanco on goal. Center backs Gustavo Cabra and Andreu Fontas might as well start again as they did in a 1-0 home win against Leganes. Fullbacks Hugo Mallo and Johny along with midfielders Daniel Wass, Stanislav Lobotka might feature again. Emre Mor and Pablo Hernandez might get game time ahead of Jozabed and Pione Sisto.

Iago Aspas will surely start again while either John Guidetti or Maximiliano Gomez might start in the attack.

Head-to-head
Barcelona and Celta have faced each other 18 times in the past with the Catalan side emerging victorious on 11 occasions while Celta has won five times and two have ended in draws.

In the last six meetings between these sides, Barcelona and Celta both have won three times each.

In the 2014-15 La Liga season, Celta defeated Barca 0-1 at the Camp Nou and lost to Barca with the same scoreline at the Balaidos.

So, Barca has not won the first match against Celta in La Liga since October of 2013.

Recent form
Barcelona looked all set for the La Liga title and has won 11 out of 13 matches with two draws while ninth-placed Celta has won five, lost six and drawn two matches in the league so far with 17 points.

Messi has gone six games without scoring a goal in all competitions. That’s his worst goalless record since 2010.

PARIS, Feb 15: Two years after being humiliated by Barcelona in the Champions League, Paris Saint-Germain turned the tables on the five-time... Read More...

Kabul Tragedy: The price of hoping against hope

KATHMANDU, June 24: The killing of 13 Nepali security guards in Kabul comes as a grim reminder of the perilous... Read More...