Barcelona has one eye on knockout rounds 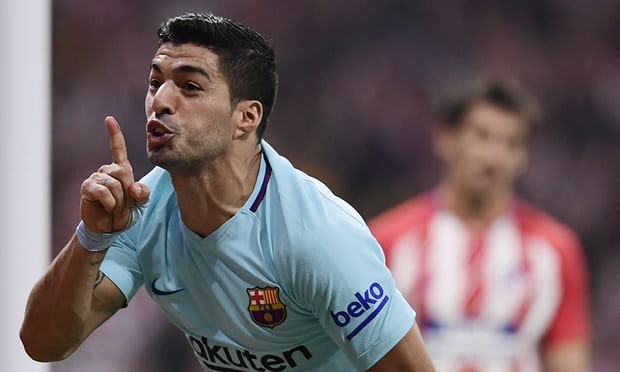 BARCELONA, Oct 17: Barcelona lost their first points of the 2017-18 La Liga season away at the Wanda Metropolitano against Atletico Madrid with a 1-1 draw on Saturday. Now, they hope to continue winning in the UEFA Champions League Group D to make it to the knockout phases, when they face Greek champions Olympiacos at the Camp Nou on Wednesday.

Barcelona’s Luis Suarez scored a headed equalizer in the 82nd minute cutting out a 21st minute Saul Niguez goal as Barca’s shot-stopper Marc-Andre ter Stegen was left hopeless but to take the ball out of the net.

Barca’s new boss Ernesto Valverde had experimented some unusual tactics in that game. Starting Andre Gomes on the right wing and leaving midfielder Roberto and winger Gerard Deulofeu on the bench. Roberto even provided an assist to striker Suarez for the all-important equalizer giving Barcelona some parity in the crucial match risen by tensions of Spain-Catalonia dispute.

Deulofeu was even brilliant in that game after he came in for tired Andres Iniesta in the 61st minute of the match. Deulofeu was pushed to the right wing and Gomes in the left midfield where Iniesta was playing. He made some outstanding cutbacks from the wings, made terrifying runs, and threatened the Atletico’s defense after he came in. Gomes played well when he was deployed in the midfield role, but what was he doing in the right wing for the entire first half? This all goes down to the courtesy of Valverde’s experiments. Starting a midfield player on the wings and expecting a result out of it is utter nonsense.

Gomes had a shot, but was off target. His distribution was poor having managed just a cross, a long ball and a key pass. He made no interceptions at all and won just two aerial duals. That shows how pathetic he was on the wings. All thanks to Mr. Ernesto Valverde. On the contrary, Deulofeu had a better distribution of the ball. He managed a long ball which was accurate enough and a key pass which made some clear-cut chances for Lionel Messi and Luis Suarez, only to be wasted. He also had an interception, succeeding a dribble in the second half.

Now, Barcelona has to win this game and also better its performance than the Sporting Lisbon clash two weeks ago. Barcelona had won the match in Lisbon by 1-0, but was very poor.

The Catalan side has six points followed by Sporting and Juventus who have three points each in second and third respectively. Olympiacos has none so far.

Team news
Barcelona brought in Roberto and Deulofeu in the second half, so we expect him to start them in this game. Defenders Gerard Pique and Samuel Umtiti all started in the Atletico match, and as well start again, while left back Lucas Digne may start ahead of Jordi Alba. Also, Valverde may leave Nelson Semedo on the bench to try his favorite experiment: Playing Roberto in the right back role.

Brazilian midfielder Paulinho came late in the 79th minute of the match so he may very likely start this match over Ivan Rakitic. Messi, who hasn’t still missed a match for Barcelona, might start again with Luis Suarez.

Olympiacos’ defenders Pape Abou Cisse, Dimitrios Nikalaou, Diogo Figueiras, and Leonardo Koutris may as well start against Barcelona, while midfielder Konstantios Fortounis might pave way for Alberto Botia, who came in for the final five minutes in a 3-4 away win against Panionios.

Manager Takis Lemonis has some injury problems with El Fardou Ben Nabouhane out with a hip injury.

Head-to-head
Barcelona has not played a single game against Olympiacos until now.

Recent form
Suarez’s form has had a major dip this season, but his goal against Atletico may do his confidence a little favor, also taking in mind the form Lionel Messi is in. He was goalless in the last match as well as the Sporting clash, but had played wonderfully on Saturday.

Even Atletico’s boss Diego Simeone praised his commitment after he showed a terrific performance against his side. Traveling from Spain after sending his team to the 2018 World Cup in Russia, Messi never showed any sign of tiredness, Simeone said.

So, we can expect him to score some goals in this match to add to his tally. Messi has two goals in the Champions League so far, both coming on the first matchday against Juventus.

Lemonis’ side has to be on its best to stop the Barcelona’s strike force and stop conceding goals as they did in their last league match against Panionis.

Olympiacos is fifth in the Greece Superleague table, so, we can expect Barcelona to comfortably win this game considering that the Greek champions hasn’t won a single Champions League matches so far.

Coalition govt has destroyed the foundation of democracy: Oli
18 hours ago

We won't allow House to function as long as people expelled by party are present there: Oli
20 hours ago
Eighth Tanahun festival to begin from January 22
17 minutes ago

NC General Convention: Voting for the leadership of Bagmati Province today
40 minutes ago

One killed as bus hits tractor
1 hour ago