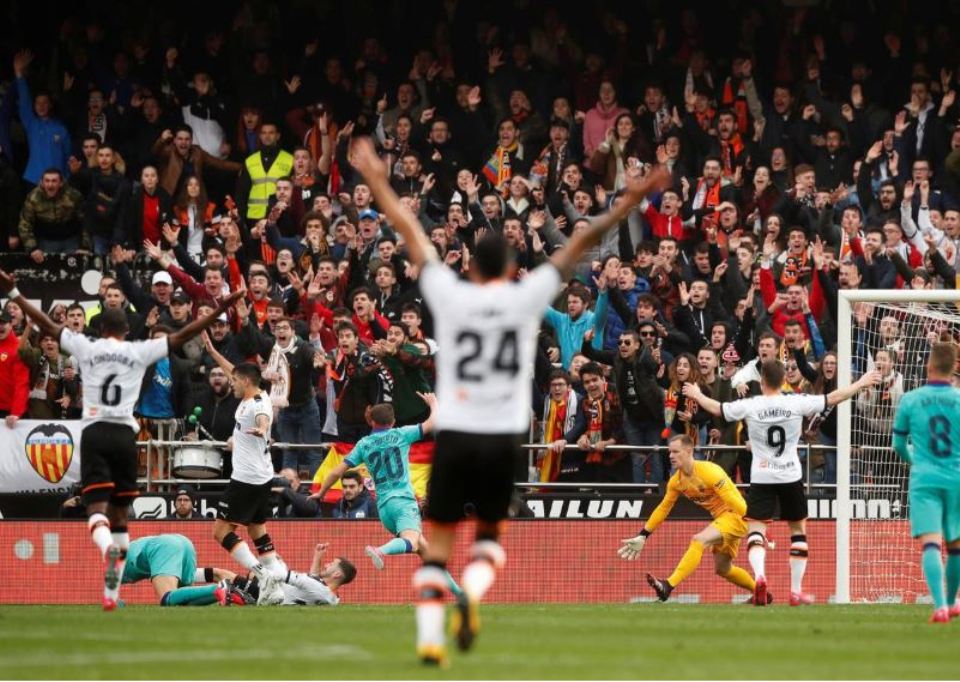 VALENCIA, Jan 26: La Liga champions Barcelona were beaten 2-0 away to Valencia on Saturday for their first defeat in three games under new coach Quique Setien.

An own goal from former Valencia defender Jordi Alba gave the home side a deserved lead early in the second half while Maxi Gomez struck in the 77th minute to seal his side’s first home win over Barca in the league in almost 13 years.

Barca dominated possession at Mestalla but Valencia controlled the game and might have thrashed the league leaders had it not been for some wonderful saves from goalkeeper Marc-Andre ter Stegen, who also kept out an early penalty from Gomez.

Gomez finally got the goal his performance deserved when he fired into the bottom corner as the Catalans were caught out on the counter-attack.

Valencia thought they had scored a third goal when Gabriel Paulista netted from a corner but the goal was ruled out for a foul following a VAR review.

“The reality is that we did not play well at all, especially in the first half,” said Setien, who was appointed Barca coach earlier this month after Ernesto Valverde was sacked despite winning consecutive league titles with the club.

“We couldn’t get near their goal and at certain moments we did not understand each other well and Valencia made the most of our mistakes. We made a lot of passes for the sake of making them and were not capable of causing any damage.”

Barca are still top of the standings on 43 points after 21 games but second-placed Real Madrid, who are also on 43, can go three points clear at the summit if they beat Real Valladolid away from home on Sunday.

Valencia meanwhile climbed up to fifth in the table on 34 points after producing an emphatic response to last week’s 4-1 drubbing at the hands of struggling Real Mallorca and losing 3-1 to Real Madrid in the Spanish Super Cup.

“We deserved this victory after the two bad results we had. This team has real fight and spirit,” said goalscorer Gomez.