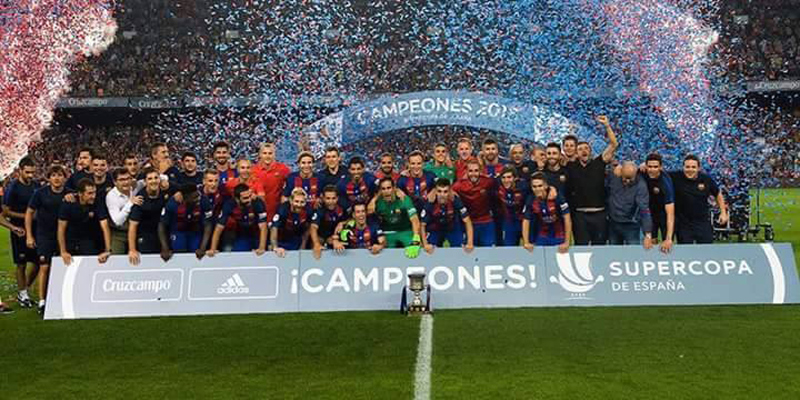 BARCELONA, Aug 15: Arda Turan scored two goals before Lionel Messi added a third as Barcelona beat Sevilla 3-0 on Wednesday to win the Spanish Super Cup with a 5-0 victory on aggregate.

Turan, who struggled to find his stride last season, continued to fill in successfully for Neymar while the Brazil star plays at the Rio Olympics.

The Turkey midfielder scored from Messi's pass in the 10th minute before striking from long range two minutes after halftime. His goals at Camp Nou followed his excellent assist for Luis Suarez in the 2-0 first-leg win.

Messi headed Barcelona's third in the 55th, his first goal this season.

Barcelona finished with 10 men after Javier Mascherano asked to be substituted with 10 minutes left and after coach Luis Enrique had made all three changes.

Messi, sporting his new died-blond hairdo, raised the trophy after the final whistle. Barcelona added the minor title to last season's Spanish league and Copa del Rey titles to complete its haul for 2016.

It was Barcelona's eighth title of a possible ten under Luis Enrique.

"I feel very fortunate to have these players, they don't stop surprising me," Luis Enrique said. "We like winning all the trophies we can. You saw that in the intensity my players displayed."

Sevilla, meanwhile, lost its second final in as many weeks, after also falling to Real Madrid in the UEFA Super Cup.

The visitors threatened Barcelona sporadically in the first half, before being overwhelmed in the second.

Turan slotted in the opening goal after Messi played him clear following a passing combination with Andre Gomes, who was making his club debut along with central defender Samuel Umtiti

Jorge Sampaoli's Sevilla had a chance from the penalty spot after Umtiti was whistled for a handball in the box after half an hour, but goalkeeper Claudio Bravo saved Vicente Iborra's try.

But it was all Barcelona otherwise, as it geared up to start its Spanish league title defense against Real Betis on Saturday, when Sevilla plays Espanyol.

"We are in very difficult moment," Sampaoli said. "We had to play two finals that were like Champions League finals against the best teams in the world in Real Madrid and Barcelona. But we now have one single day of practice to prepare for Espanyol. We have to face the match in the best manner possible."

Turan got his double with an audacious, first-touch strike to curl a bad Sevilla pass he had pounced on over goalie Sergio Rico.

Messi then sent Rico flailing in vain to keep out his lofted header from a cross by summer signing Lucas Digne.

Neymar heading back to Barcelona after World Cup qualifiers