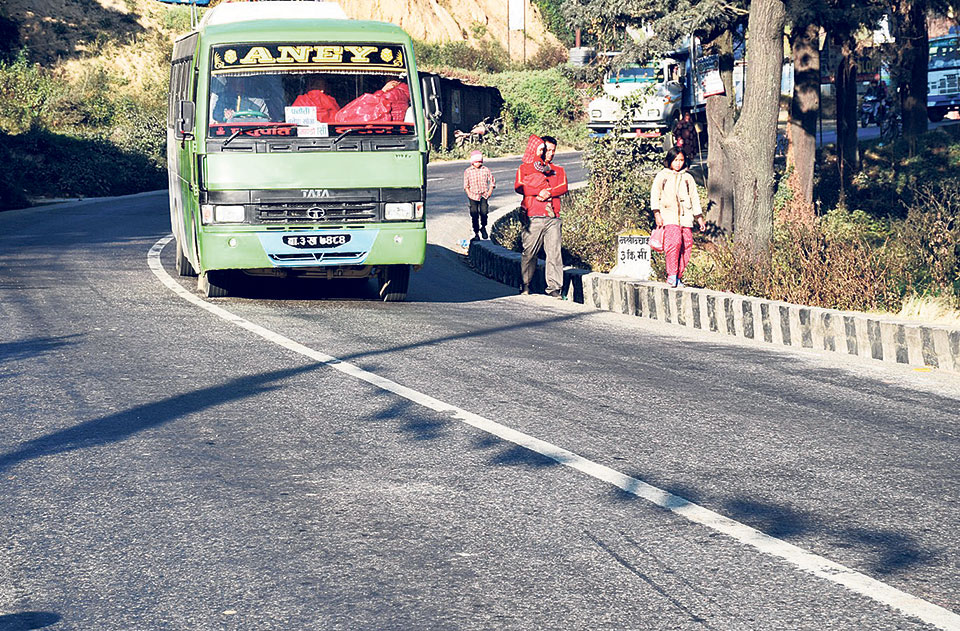 BANEPA, Nov 23: With growing number of pedestrians being hit by vehicles plying along the Araniko Highway in Banepa, road safety has become a major concern for the locals. Recently, two pedestrians lost their lives after being by vehicles along the Budol- Janagal section of the highway. The victims were Babu Bista, 57, of Janagal and another elderly man remains unidentified.

Bista was walking the left side of the road when a speeding jeep hit him. The elderly unidentified man was hit while he was crossing the highway.  Few years ago, Bhim Bahadur Madhikarmi was out for morning walk when a truck near the Bikateshwor Bridge in Banepa hit him.

Accidents like these have heightened public concern over the issue of road safety. After raising voice for creating safer walking lanes for pedestrians along the roadsides, concerned authorities had assured them to open such track on the left and the right side of the highway. The pledge, however, remains unfulfilled.

“In the past there was less congestion on the highway and drivers did not drive as erratically as some of them do nowadays. So, pedestrians were comparatively safer back then,” notes Sanjeev Bista, a businessperson from Janagal. “But with new vehicles adding up every day and drivers resorting to reckless driving, the road is not safe for pedestrians anymore,” he added.

According to Bista, accident has become frequent along the highway in the recent years. Thousands of cars, jeeps, mini bus and trucks ply on the road. Along with them, speeding motorbikes also have posed threat to pedestrian safety, he said.

“As pedestrians were killed and injured more frequently, we took the matter to the concerned authority. They sat and talked with us. They had promised to build walking lanes on each side of the roads, but so far nothing has been done in that regard,” Bista stated.

Even though locals were very eager for developing walking tracks for pedestrians and were ready to support it, ‘the attitude of the road department and other related offices, has been very unhelpful, Bista said.

“We want the local administration and the road department to come clean on constructing walking tracks on both sides of the road from Putalibazar of Banepa Municipality to Sanga Bhanjyang,” Bista said. He added that locals were willing to contribute labor and other assistance.

Locals state that there are several unsafe sections along the highway. The 16-kilometer Suryabinayak-Dhulikhel road section is perhaps the most risky segment for pedestrians, they assume.

“The road is poorly engineered and managed and because of that those who walk or drive on the road are equally at risk of meeting with an accident,” Bista stated.

School students, who have to use the highway on a regular basis, are at high
risk. One of the riskiest sections of the highway for students is between Aadarsha bus stop of Bhaktapur and the Siddhi Memorial hospital. A maximum number students coming from Bhaktapur use this particular segment of the highway.

Not only the locals and pedestrians are not happy with the condition of the road, drivers are also equally unhappy. Though they stop to pick passengers from the Adarsha bus stop, they say that the narrow road ahead is full of risk for them to ply their vehicles on.

“Passengers’ safety is our responsibility. But when the road is so pathetic, narrow and unmanaged, what can we do?” fumed a driver. He added that everyone would be relieved if the road is made wider and separate tracks are constructed for pedesterians.

Along with that, some drivers complained that the highway police patrol should not inspect vehicles at narrow points of the road.

“The highway is very narrow and on top of that it has open sewage on both sides. These make it risky for the pedestrians as well as the drivers. School children at Sanga bus stop and other areas have fallen in sewages many times,” said Ram Hari Shrestha, former chairperson of Sanga VDC.
Shrestha urged all the stakeholders to support and materialize the idea of developing separate track for pedestrians along the highway and in inner city roads.

BANEPA, Nov 8: A minor died on the spot in a road accident at Tamaghat this morning.  The deceased has... Read More...

CHAUTARA (Sindhupalchok), Sept 3: Traffic has been affected along the Araniko Highway after around 100 meters road has caved in at... Read More...