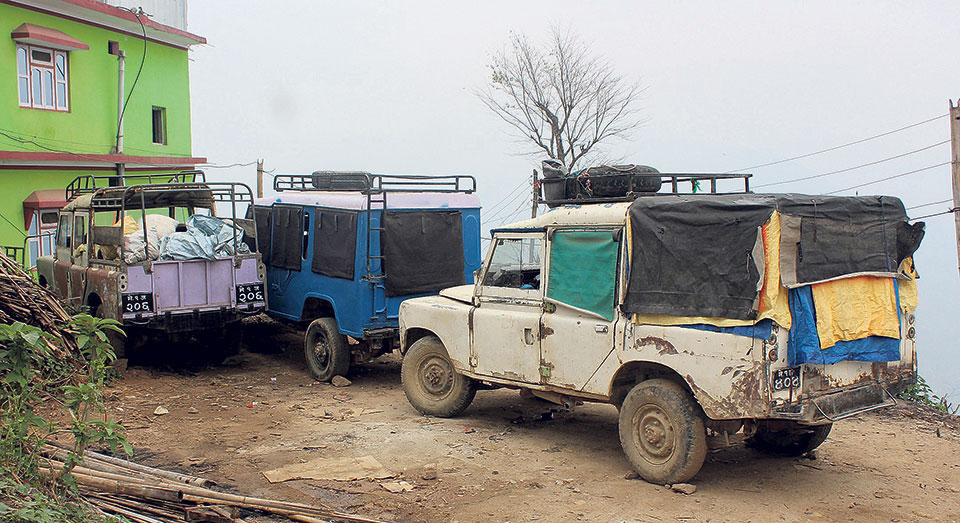 ILAM, March 16: Two years ago, Ganesh Gurung of Mabu village in Ilam district purchased a second-hand Land Rover for Rs 800,000. He operated the vehicle as public transport on the Majhuwa-Ilam road section. So far, he said he has managed to earn Rs 300,000 from the vehicle.

“I still have to repay a loan of Rs 500,000 that I had taken to purchase the vehicle,” said Gurung, who drives the vehicle himself. “The government ban on vehicles older than 20 years has affected me as well. I see no way to clear my loan. This decision of the government also ends my source of income,” he added.

Kaji Shrestha, another local of Ilam, had also invested his three years of saving from working in Malaysia in a second-hand Land Rover. He bought the vehicle about one-and-a-half years ago for Rs 900,000. “So far, I have managed to earn Rs 400,000 from the vehicle. The money I earned through hard labor in a foreign country has been wasted,” he said.

Likewise, Nima Tamang of Jamuna had also purchased a vehicle for Rs 800,000 after working as a driver for 15 years. The government's decision has affected him as well.

There are over 40 youths in the district alone who had bought second-hand vehicles through their savings. They are disappointed with the government for enforcing the ban without providing any alternative to them.

The government has enforced the ban on vehicles older than 20 years old from Thursday, which has deeply worried transport entrepreneurs. The decision has practically shut most vehicles which provided transportation in various villages of the eastern hill region. In some villages, there is no means of public transport to reach the district headquarters.

Such vehicles were the only means of transportation in dozens of villages of eastern districts, including Ilam, Panchthar, Taplejung, Dhankuta and Bhojpur. However, since the ban from Thursday, passengers in the region are facing a great inconvenience.

According to Grishma Subba, chairman of Eastern Jeep and Taxi Entrepreneurs Association, the government implemented the ban without any basis. “There were around 600 old vehicles in the eastern region. Now, as all these vehicles have been forced to keep off the road all at once, thousands of passengers are going to face inconvenience.”

School students of various hill, tarai districts yet to get all textbooks

KATHMANDU, May 27: The textbooks of at least three subjects are yet to be provided to students in various schools... Read More...