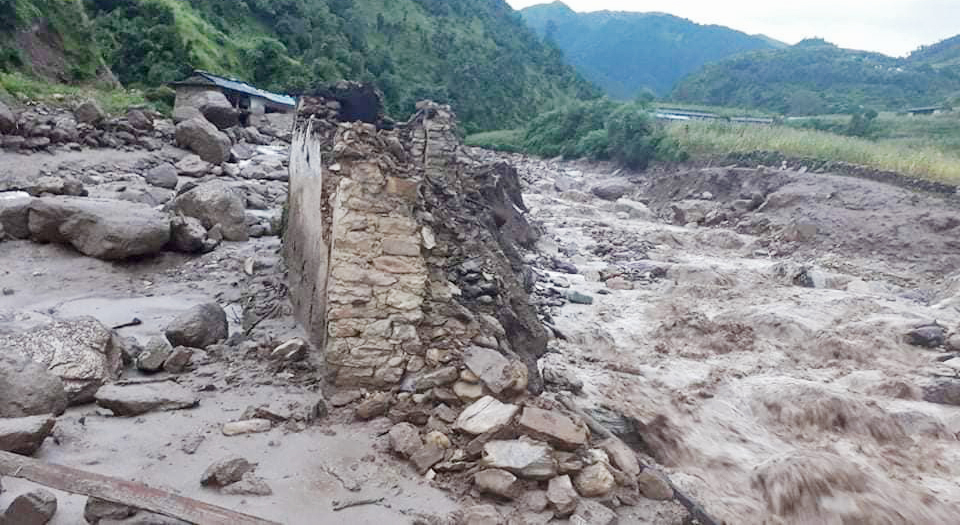 KATHMANDU, Sept 4: The identity of seven of the 14 bodies recovered following the flooding caused by the swollen Bhujikhola River of Dhorpatan Municipality in Baglung district have been established. Twenty four people are still unaccounted for in the disaster.

A hill near Dhorpatan Deurali collapsed and blocked the river on Wednesday night following heavy rain in the area. The blocked river forced its way leading to massive flooding of the Bhujikhola river.

The bodies of 14 people have been found so far. More than 70 houses have been completely destroyed in the disaster. The bodies of Keshmaya BK, 26,  Kar Bahadur BK, 46,  Jeevan BK,22, Dalli BK,11, Dilmaya, 21,  Pun, Reena Kumari Gharti, 35,  and Karamati Budha, 32,  of Dhorpatan-9, have been identified, the District Police Office said.

Police said the identity of seven more bodies is not yet ascertained as they are in mutilated condition and unrecognizable.

Four injured people were rescued on Thursday. Among them, the condition of Mahendra Pun of Dhorpatan-9 is critical. He is undergoing treatment at the Primary Health Centre in Burtibang.

The flood has damaged the building of the Lankuribot health post, the Janachetana Primary School and the Saraswoti Primary School. The buildings of four out of the five branches of Bhujikhola hydroelectricity project, one jeep and a motorcycle parked near the road at Dhorpatan-9 were also washed away by the flood.

POKHARA, Sept 3: The number of people killed after being swept by a massive flood in the Bhuji River in... Read More...