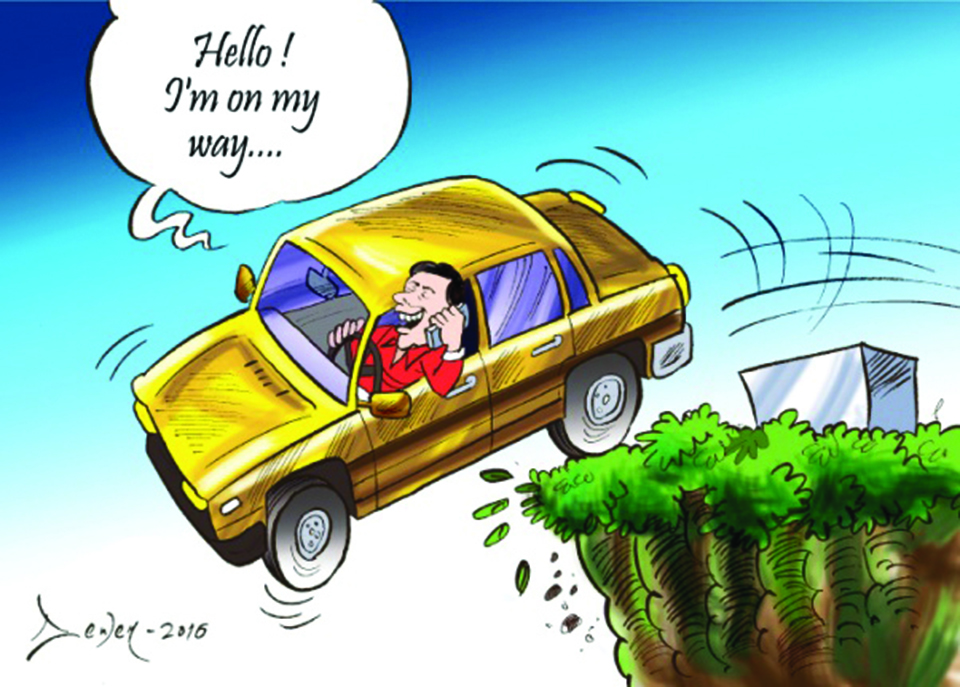 The author is a Research Associate at the University of the West of England, UK
news@myrepublica.com

Road safety in Nepal is a social, developmental and a public health issue, but it has not received the attention it deserves. Some incidents get widespread attention because of the number of people who die. Political leaders condemned the mass injuries that occurred in recent road traffic crashes in Nuwakot and Dang (that killed 43 and injured 30), journalists shared the news and the public made it a topic of tea gossip.

Such public awareness of road injuries, however, gradually fades with time, and there may be little further attention until the next fatal traffic crash occurs. Despite the World Health Organisation’s estimate that road traffic crashes kill an average of 13 people and injure several others every day in Nepal, neither the government and journalists, nor the public appear to recognize the urgent need for action to save lives from future events.

Road traffic injuries result in significant emotional distress for families and friends of victims, in addition to the enormous financial costs to individuals, families and nations for the provision of treatment, care and rehabilitation, and with the loss of a workforce through premature death or disability. According to the United Nations Economic and Social Council 2018 report, road traffic crashes cost Nepal 0.8 percent of its GDP—that is Rs 14.58 billion (US$ 145.82 million) in 2013. These social and economic burdens of road traffic crashes are intolerable.

It is common that newspaper articles report a road traffic event as “accident” or “mishap” and a vehicle involved in a crash as “ill-fated.” An accident is an inevitable event. The death toll due to road traffic crash is, however, largely predictable and preventable and is not determined by chance, bad luck or fate of a vehicle. Causes of  road crashes on Nepal’s road are related to the behavior of drivers (such as speeding, inappropriate overtaking, driving under the influence of alcohol or drugs, or being distracted whilst using a mobile phone), poor road infrastructure, unsafe vehicles, and inadequate enforcement of traffic laws (such as failing to wear seat belts or using a motorcycle helmet). The inadequate availability of post-crash care is often overlooked, but is an important factor in the reasons why people do not survive road traffic crashes in Nepal.

Several proven measures are available that can significantly reduce road traffic deaths and injuries. Raising public awareness about the causes of road crashes and mitigation measures could be a starting point. Police enforcement of drink driving through random breath testing has been a useful measure, which the Government of Nepal should continue. There is a need for a strong law and enforcement of speed limits, use of motorcycle helmets by both rider and pillion passengers, the use of seat belts by both the driver and passengers, and prohibiting the use of mobile phones while driving. Such actions may need implementation at national, municipal, and local levels.

Research findings from other countries have shown that proper use of a helmet can reduce the risk of a fatal injury by more than 40 percent and the risk of any head injury by approximately 70 percent. Similarly, using a seat belt can decrease the risk of death by 50 percent among drivers and front seat passengers. A driver using a mobile phone while driving is almost four times more likely to be involved in a crash than a driver who is not using a mobile phone.

A comprehensive approach to improving road safety in Nepal would be a ‘safe systems’ approach that is gaining popularity globally. This approach to road safety acknowledges that human beings may make mistakes on the road, but the consequences need not lead to deaths or serious injuries if other actions are in place. It requires shared responsibility for road safety between those who design, build, use and manage roads. That means agencies and the public need to work together.

The safe systems approach includes issues such as driving at speeds appropriate to the conditions, building safe roads (not just greater length of roads) and ensuring that roads are improved and maintained adequately. These actions will reduce the risk of crashes and the severity of impacts when crashes occur. As new roads are being constructed every year in Nepal, there is an opportunity for us to design the roads that protect all road users so that there are adequate footpaths for pedestrians, cycle lanes for cyclists, and safe crossing points for all road users. Vehicle safety standards are crucial. All vehicles should be checked for their roadworthiness including the availability and functioning of airbags and seat belts, which have been shown to save lives during a crash.

The safe systems approach may initially seem ambitious. However, countries that have implemented it have made the most progress in reducing deaths and injuries over time, including in low-and middle-income countries like Tanzania. Strong leadership along with active involvement of multiple sectors are crucial to executing the safe systems approach.

In Nepal, few road traffic crash victims get treatment at the scene of the crash and few are transported promptly by ambulance to a health facility that is set up to care for them. In this situation, road trauma victims with survivable injuries may die at the scene or on the way to a health facility. Providing appropriate first response to victims at the scene of an injury event followed by quality medical attention has the potential to save lives, reduce injury severity and prevent disability. Therefore, it is essential that enough people are trained to know how to help give first aid to someone who has been in a road traffic crash. First responders could include for example, shopkeepers, other drivers, school children and traffic police officers.

We all need to discontinue the use of word “accident” which is inappropriate for the description of road traffic events and replace by correct terms such as a “crash” or “collision” or “road traffic injury” to develop a culture of prevention. The best way to reduce road traffic deaths and severe injuries in Nepal is through a safe systems approach with good post-crash care. It is now time to get behind a shared vision and to work together to make our roads less hazardous. The decisions we make now will affect future deaths and injuries on our roads. It must be the duty of the Government of Nepal to take strong leadership to address road safety in a safe systems approach involving multiple sectors such as transport, engineers, police, health and education.

The author is a Research Associate at the University of the West of England, UK