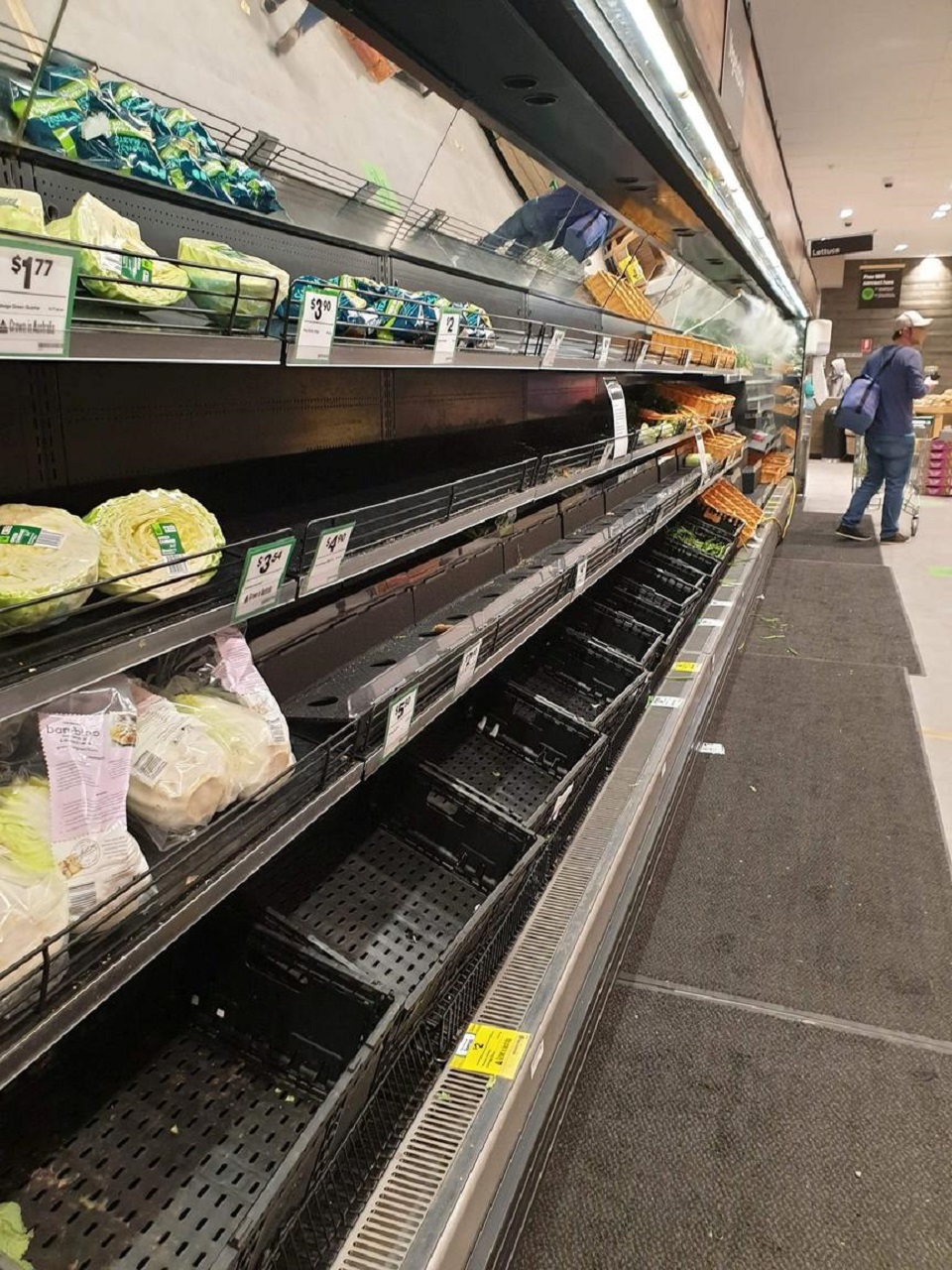 Near empty shelves are seen at the vegetable section of a supermarket amid the coronavirus disease (COVID-19) outbreak in Melbourne, Victoria, Australia, in this August 2, 2020 photo obtained from social media. Klarissa Leahy/via REUTERS

MELBOURNE, Aug 2: Australia’s second-most populous state of Victoria declared a state of disaster on Sunday and imposed a nightly curfew for the capital Melbourne as part of its harshest movement restrictions to date to contain a resurgent COVID-19.

Melbourne, Australia’s second-largest city already under a reimposed six-week stay-home order, has struggled to rein in the disease, with record numbers of infections of the new coronavirus reported last week.

On Sunday, Victoria reported 671 infections, one of its highest, and seven COVID-19 deaths. High numbers of community transmissions and cases of unknown origins have forced the new restrictions, which will be in place for six weeks, officials said.

“The current rules have avoided thousands and thousands of cases each day, and then thousands of people in hospital and many more tragedies than we have seen. But it is not working fast enough,” Victoria Premier Daniel Andrews told a televised briefing.

A curfew from 8 p.m. to 5 a.m. every day will be implemented from Sunday evening in Melbourne, barring the nearly five million people in the city from leaving their houses except for work or to receive or give care.

The sweeping new restrictions limit the time Melbourne residents may spend on outdoor exercise and essential shopping. All schools will move to remote learning from Wednesday.

Supermarkets will remain open, and restaurants, already closed for dining in, will be able to continue with their takeaway and delivery services.

The federal government backed Victoria’s measures, with Prime Minister Scott Morrison saying in a post on his Facebook page that they were “regrettably necessary” to stop the spread of the pandemic.

“We are all in this together and we will get through it,” Morrison said.

Australia’s Health Minister Greg Hunt said at a televised briefing the federal government supports the measures with a ‘heavy’ heart.

“We do so because they will help save and protect lives,” Hunt said.

The backing by the federal government, ruled by a Liberal Party-led coalition, for the measures by Victoria’s Labor Party government shows national unity across the political spectrum in a country with a loose federal system.

Australia has fared far better than many other countries in keeping the coronavirus from spreading, but at a high economic cost. It has recorded around 18,000 coronavirus cases and just over 200 COVID-19 deaths, but the recent surge in Victoria has proven difficult to contain.

“We have no choice but to make these decisions and to push on,” Andrews said. “This is the only option we have.”

Restrictions on movement and business operations elsewhere in the state will be less severe than in Melbourne. Andrews said further restrictions for Victoria businesses will be announced on Monday.

Neighbouring New South Wales, the most populous state, reported 12 infections on Sunday, with the state now “strongly” recommending the use of face masks in public.