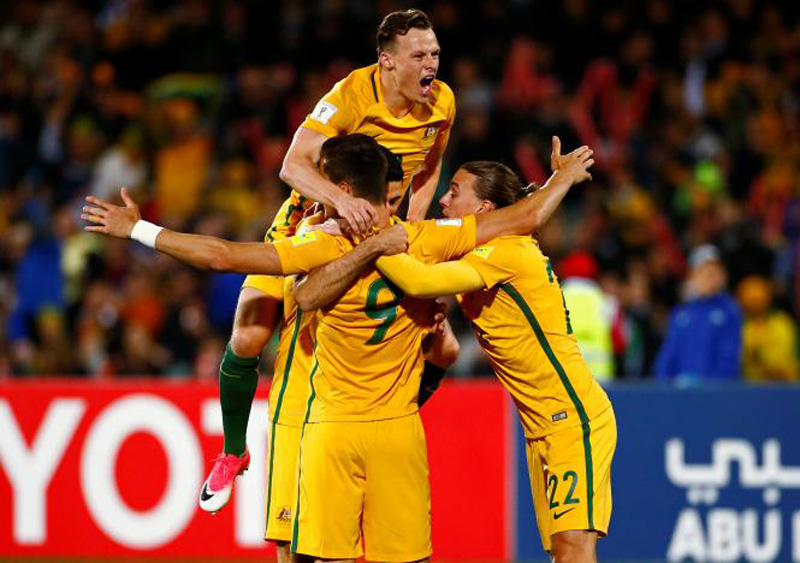 Australia's hopes of a fourth successive World Cup appearance remain in their own hands after a nerve-jangling 3-2 win over Saudi Arabia in their qualifier in Adelaide on Thursday.

A stunning left-foot strike from attacking midfielder Tom Rogic in the 64th minute proved the difference after the teams were locked 2-2 at the break in front of a parochial crowd at Adelaide Oval.

The Socceroos stay third in Asia's group B with two games remaining but join the second-placed Saudis and leading Japan, who have a game in hand, on 16 points.

The top two teams qualify automatically for Russia, with the third placed side going into a playoff.

Australia coach Ange Postecoglou was relieved after his side escaped with the win after a poor first half laden with defensive errors.

"Obviously the three points were important when you look at how tight the group is," he said.

"What we want to do now is go to Japan and knock them off.

"If we do that we don't have to worry about goal difference or points."

Australia travel to Japan in August before closing their campaign at home to lowly Thailand.

Goal difference could ultimately prove crucial and Juric rued sending a late, left-foot chance flying over the bar that would have had his team in line to leapfrog the Saudis into second in qualifying.

The home side also felt aggrieved when winger Mathew Leckie went down in the area in the 70th minute after a heavy challenge from Salman Al Faraj, but Uzbek referee Ravshan Irmatov was unmoved.

The Socceroos were gifted a perfect start by Saudi goalkeeper Yasser Al-Mosailem, who slipped during his clearing kick and sent the ball straight to Juric, who duly hammered it back into the net in the seventh minute.

The Saudis responded well to the setback, and jet-heeled midfielder Al Dawsari crashed through at midfield to slash a low shot past keeper Mat Ryan in the 23rd minute after a neat one-two with striker Al Sahlawi.

The Saudis fell behind again when Leckie burned up the right flank and fired a pin-point cross to Juric, who nodded home his second goal into the left corner.

But a long lofted through-ball sliced open the Australian defence and Al Sahlawi latched onto a header into the area to volley the ball home.

A more aggressive Australia emerged after the break to win control of the midfield, allowing Rogic to step up and launch his thundering strike from just outside the area.

Make arrangements for students who returned from China due to COVID-19 to go back: Parliamentary committee
17 hours ago