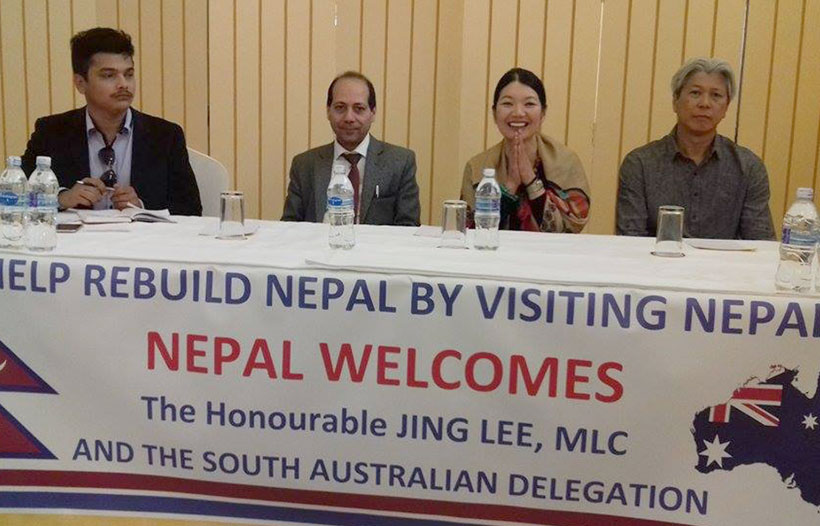 Speaking at a press meet at Tribhuvan International Airport (TIA) before her departure, lawmaker Lee said her delegation arrived here seeking to support Nepal in its ongoing post-earthquake reconstruction campaign and added that "Nepal is safe for travel".

During her Nepal visit, she found it safer, she shared her experiences, urging the international community to visit Nepal and help it in the reconstruction efforts. "Nepal is rich in history, art, culture and adventurous trekking routes, mountains, flora and fauna and natural possessions have made it a wonderful tourist destination,' she described.

In her words, "one must visit Nepal once." She said during its stay here, the delegation member visited the areas within the Kathmandu Valley, Pokhara, and Chitwan and was mesmerized by the natural beauty of Pokhara.

Traditional art and culture inherited by the capital, extra-ordinary natural beauty possessed by Pokhara, an elephant riding in Chitwan and hospitality shown by the Nepali citizen to them touched their hearts and made a print in their minds, the Australian guest said.

Lee born in Malaysia is currently the lawmaker from the Australia's ruling party—Liberal Party of Australia.

Our visit was aimed at giving a message to the world that Nepal that resisted a major earthquake last year is safe as a tourist destination, she said, adding that after return home, she would encourage the Australian people to visit Nepal. She said she would take her time at the parliament there to inform lawmakers about Nepal and its beauty. During the visit, the Austrian lawmaker called on the Prime Minister and the Minister for Culture, Tourism and Civil Aviation, some of her counterparts and the government senior officials.

Lawmaker Lee is also learnt to have individually contributed to the Prime Minister's Natural Disaster Fund in the wake of the powerful earthquake (April 25, 2015) in the country. RSS

My social media feed these days is full of images and snapshots of the more picturesque parts of Nepal. A... Read More...

Siddhababadham emerging into a tourist destination

RAMPUR (Palpa), Dec 20: The Siddhababadham located along the bank of the Kaligandaki river is quickly transforming into a destination... Read More...

KP Oli is the leader of a small faction: Madhav Kumar Nepal
18 hours ago

Three dead, one injured in  Solukhumbu road accident
50 minutes ago