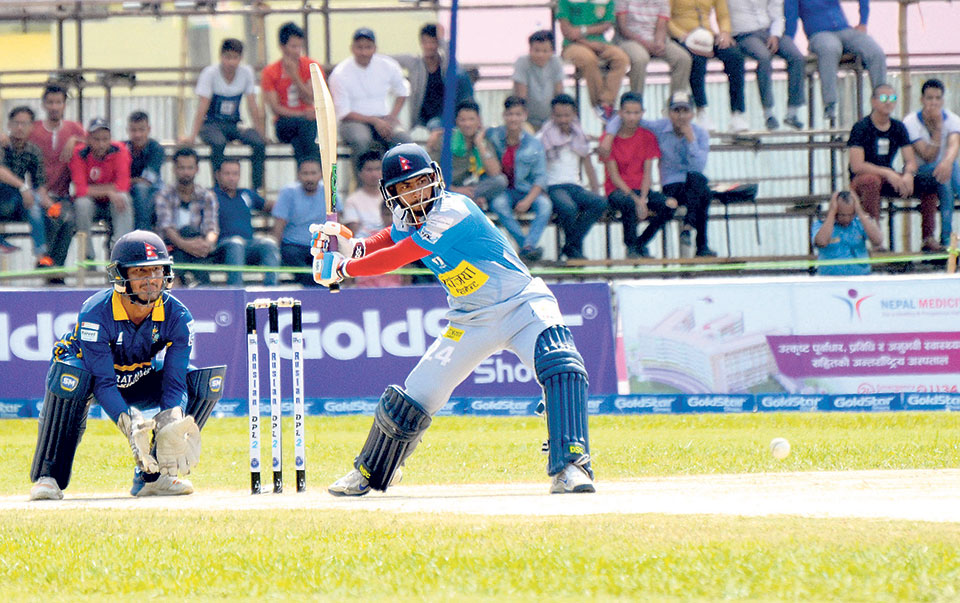 Players of Biratnagar Kings (left) and Mahendranagar United in action during the second day of the Dhangadhi Premier League T20 cricket tournament at the Seti Zone Police Cricket Ground in Dhangadhi on Sunday. Photo: REPUBLICA

An inspired bowling performance from Kamal Singh Airee led Attariya to a nine-wicket win over Rupandehi Challengers, while an unbeaten 38 runs from Indian recruit Puneet Mehra led Mahendranagar to a 33-run victory over Biratnagar Kings in the matches played at the Seti Zone Police Cricket Ground.

In the first match, Rupandehi elected to bat first and presented a trivial target of 61 runs for the loss of all its wickets in 15.2 overs. In reply, Attariya chased the target in 7.3 overs for the loss of a wicket.

Two opening batsmen for Rupandehi, Pradeep Singh Airee and Sagar Pun went back to the pavilion for ducks, while Oman recruit Sufyan Mehmood hit the highest 20 runs off 25 balls that included a six and a four for the losing side.

The other players simply could not add runs to the board as Bikram Bhushal and captain Shakti Gauchan scored eight runs each, while Jitendra Mukhiya hit seven runs.

For Rupandehi, Mukhiya picked up a wicket in the two overs he bowled giving away 16 runs.

Kamal Singh Airee was named the man-of-the-match and was rewarded with Rs 10,000 for his contribution.

In the second match, Mahendranagar won the toss and elected to bat first, presenting a 168-run target for the loss of five wickets in the allotted 20 overs. In reply, Paras Khadka-led Biratnagar was all out for 135 runs in 19 overs.

For Mahendranagar, Mehra hit the highest 38 runs off 18 balls which included three sixes and two fours, while opening batsman Binod Bhandari scored 35 runs off 29 balls including a six and five boundaries. India’s Punit Bisht contributed with 24 runs off 14 balls with a six and a four, while Aarif Sheikh made 20 runs off 15 balls with three boundaries. Also, Harishankar Shah added 19 runs off 19 balls with a six, while Aasif Sheikh and Rohit Kumar Paudel hit nine runs each.

For Biratnagar, Manjeet Shrestha picked up two wickets in the four overs he bowled, giving away 30 runs, while India’s Shubham Kamat and skipper Khadka nicked a wicket each.

In reply, Biratnagar made a frantic start as Dilip Nath was bowled out by Avinash Karn after he made 10 runs off nine balls with two boundaries and Anil Kumar Sah added 23 runs off 19 balls including three boundaries and a six. At one point it was 45-2 at the end of the fifth over. A good batting performance from Hong Kong captain Babar Hayat and Prithu Baskota helped Biratnagar gain some momentum, but the partnership was cut short when Hayat went back to the pavilion making 32 runs off 10 balls including four sixes and two fours, while Baskota contributed 35 runs off 39 balls comprising of a six and two fours.

But, after the departure of Hayat, no batsmen could do anything concrete to chase for Biratnagar as Manjeet was out for nine and Kamat for four. Also, Saurav Khanal and Ramnaresh Giri contributed a run each, after Khadka added 16 runs off 15 balls with a six before falling prey to Mehra. Pawan Sarraf and Basant Regmi were out for ducks.

In the win, Karn picked up three wickets in the three overs he bowled giving away 22 runs, while Mehra, Bhuvan Karki and Robeen Chhetri pocketed two wickets each. Shah also nicked a wicket.

Mehra was adjudged the man-of-the-match and was rewarded with Rs 10,000 for his contribution.

Team Chauraha Dhangadhi will take on Attariya, while Rupandehi will face Kathmandu Goldens on Monday. 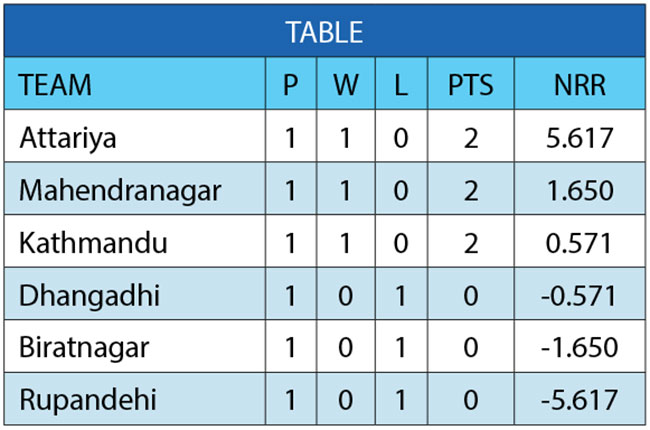 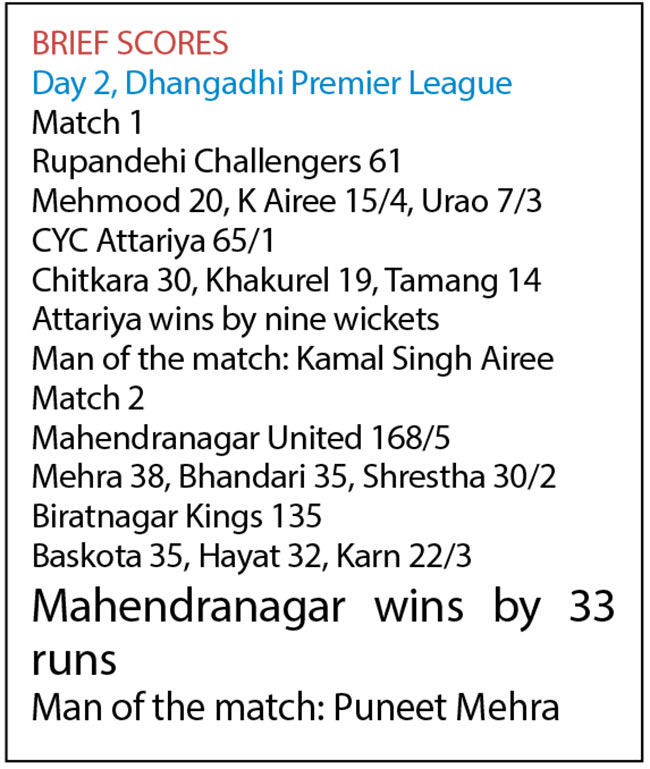 Rupandehi fails to make it to playoffs ... Read More...