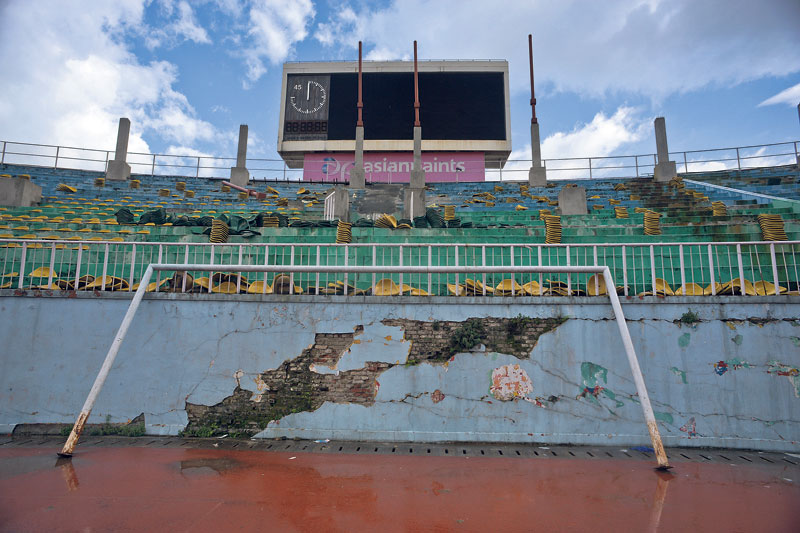 KATHMANDU, Nov 23: It will take at least three more years to repair the Dasharath Stadium parapet damaged by last year's devastating earthquakes. Though the Detailed Project Report (DPR) of the stadium has still not been submitted, preliminary reports suggest that the stadium cannot be ready before three years.

“Though the DPR of the Dasharath Stadium is yet to come, it will not be able to accommodate spectators to its full capacity for at least three years,” said Arun Upadhyay, chief of the Infrastructure Development and Repair Department at the National Sports Council (NSC). “Even if the report suggests partial maintenance, it won't be complete before three years. Simple maintenance and repair will also take three years because the NSC needs to go through various government procedures,” added Upadhyay.

The NSC needs to submit the DPR to the Ministry of Youth and Sports (MoYS) and ask to release budget as per the requirements -- either for partial repair or full renovation as per the suggestion of the report. And the budget could not be allocated another fiscal year. Thus, the NSC won't be able to start renovation promptly even after receiving the DPR.

The Infrastructure Development and Repair Department of the NSC has given the contract to a joint venture of three engineering consultant companies to prepare the DPR of the Dasharath Stadium.

Since the damage of the Dasharath Stadium last year, no football competition has taken place there. Besides this, Nepal has not hosted a single international tournament in the country except the U-19 SAFF Championship. The damage and delay in reconstruction has also cut the number of top-level domestic football tournaments in the capital.

The artificial turf of ANFA ground, Satdobato, APF ground, Halchowk and Army ground, Lagankhel are being used as alternate to the Dasharath Stadium. However, none of them meet the requirement to host international tournaments and thus the country has not hosted any official international tournament since then. Besides this, the Dasharath Stadium has a capacity of 18,000 spectators while other football grounds have a very less capacity compared to it.

After the earthquake, it took more than a year for the NSC to invite the tender for the DPR to examine the extent of damage caused by the earthquake on the stadium.

“Our administrative building itself was damaged. So, it took time to settle our office at a new place, which automatically delayed all the process,” said Upadhyay.

He also pointed out to bureaucratic procedures to be followed before going for the bidding process for tender as another reason for the delay. “Before inviting for the bids, we had to make five-month long preparation to fulfill all the government criteria,” added Upadhyay.

Those three consultant companies will not only prepare the DPR of the stadium, but they are also assigned to submit reports on other infrastructures of the stadium premises including the NSC's administrative block and also the swimming pool.

When asked about the delay in report submission, Multi Disciplinary Consultants Private Limited refused to give any information stating that it is not liable to anyone except the NSC.

CHITWAN, Feb 16:Three years are about to complete despite the deadline of two years given to finish the Narayangadh-Mulgin road... Read More...

KATHMANDU, Feb 9: National Sports Council (NSC) is set to renovate the Dasharath Stadium which has been out of use since... Read More...

Five killed, 37 others injured in bus-truck collision in Kohalpur
9 hours ago