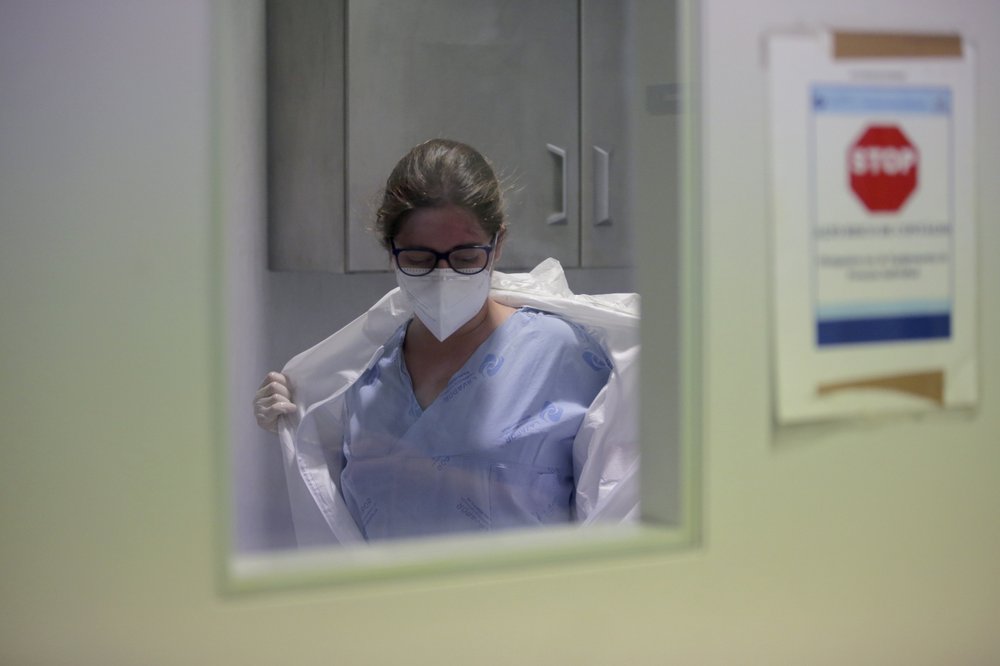 Nurse Viviana takes off her protective suit after finishing a round tending to COVID-19 patients inside negative pressure rooms at the Curry Cabral hospital in Lisbon, Thursday, Nov. 5, 2020. Intensive care space is dwindling across Europe as beds fill again with coronavirus patients, this time in places that had been spared the virus peak from last spring. (AP Photo/Armando Franca)

PARIS, Nov 10: In Italy lines of ambulances park outside hospitals awaiting beds, and in France the government coronavirus tracking app prominently displays the intensive care capacity taken up by COVID-19 patients: 92.5% and rising. In the ICU in Barcelona, there is no end in sight for the doctors and nurses who endured this once already.

Intensive care is the last line of defense for severely ill coronavirus patients and Europe is running out — of beds and the doctors and nurses to staff them.

In country after country, the intensive care burden of COVID-19 patients is nearing and sometimes surpassing levels seen at last spring’s peak. Health officials, many advocating a return to stricter lockdowns, warn that adding beds will do no good because there aren’t enough doctors and nurses trained to staff them.

In France, more than 7,000 health care workers have undergone training since last spring in intensive care techniques. Nursing students, interns, paramedics, all have been drafted, according to Health Minister Olivier Veran.

“If the mobilization is well and truly there, it is not infinite,” he said last week, when the ICU units were filled to 85% capacity. “It is not enough.”

A paramedic at the ICU in Varese, Italy

Within days, it had jumped another 7 percentage points and he warned it would continue to tick upward. And, unlike in the first wave last spring, the virus is now everywhere in France, making transfers from one region to another by high-speed train less practical. One hospital in the southern city of Marseille recently wheeled in refrigerated rental trucks ahead of a feared rise in ICU deaths there.

In Italy, Filippo Anelli, the head of the national doctors’ association, said at the current infection rate, there soon won’t be enough physicians to go around. Recently in Naples, nurses started checking on people as they sat in cars outside emergency rooms, waiting for space to free up. Italy has a total of 11,000 ICU beds, but only enough anesthesiologists for 5,000 patients, Anelli said. As of Monday, 2,849 ICU beds were filled nationwide — up 100 from just the day before.

For the average coronavirus patient with serious symptoms, it takes seven to 10 days to go from infection to hospitalization. Those admitted often need to stay for weeks, even as more patients arrive. The math is inexorable as long as infection rates rise.

Patients from France, Belgium and the Netherlands are being evacuated to German intensive care units, but German doctors say they are watching the number of free beds dwindle quickly.

“When a city of millions only has 80, 90 beds left then that can be a critical mass, because you don’t just have COVID-19, there are also traffic accidents, heart attacks, pulmonary embolisms and so forth,” he said.

In the past two weeks alone the number of coronavirus patients treated in ICUs in Germany has almost tripled, from 943 to 2,546. Still Janssens acknowledged that the situation in Germany is better than that of France, Belgium, the Netherlands and Britain.

A therapist in a Lisbon ICU holds a patient's hand.

“But a bed, a ventilator and a monitor doesn’t mean the patient can be cared for. When it comes to nurses and specialist staff, Germany is far behind,” he said. “We have a lot of beds but we don’t have enough staff for them.”

Spain has the same limitations, but endured coronavirus deaths already on a scale Germany has yet to see.

“On the one hand, the health workers are tired; on the other hand, the number of people that are working on the front line is limited,” said Dr. Robert Guerri, head of the infectious diseases department and coordinator of COVID-19 hospitalizations at Hospital del Mar in Barcelona.

His coronavirus unit filled up in October, then the critical care unit filled up. Even with the rate of infection easing slightly, he doesn’t know when any of those beds will be free.

In neighboring Portugal, Fernando Maltez has 40 years of experience preparing contingency plans for health threats as one of the country’s leading infectious disease experts. This one is different.

In the seven months from early March through the end of September, Portugal officially counted more than 75,500 cases of COVID-19. In the month of October alone, it counted almost 66,000.

“There’s no end in sight,” Maltez said at the infectious disease ward he oversees at Lisbon’s Curry Cabral Hospital, where 20 ICU beds set aside for coronavirus patients are now all occupied. “No health service in the world ... can withstand a deluge of cases that just keeps coming.”

Much of Eastern Europe, spared the harrowing wave last spring, is in the same position. Hungary warned its ICU would run out of space by December under the worst-case scenario, and hospitalizations in Poland have risen to three times the levels seen in the spring. Late last month, American National Guard troops with medical training headed to the Czech Republic to work alongside doctors there, and the mayor of Prague took shifts at a hospital.

There are a few signs of hope. Belgium, proportionally among the worst-hit nations in Europe when it comes to coronavirus cases, is seeing increasing indications of a turning point in the crisis after a partial lockdown. Hospital admissions seem to have peaked at 879 on Nov. 3, and fell to about 400 on Sunday, virologist Yves Van Laethem said.

There were fears that the 2,000-bed ICU capacity would be reached last week, but Steven Van Gucht, a virologist with the Sciensano government health group, said the pace was slowing there as well.

“The high-speed train is slowing down,” at least for now, he said.

COVID-19: Nepal can win the battle with Chinese experience

KATHMANDU, April 6: With the first case of local transmission of corona virus in the district of Kailali, COVID-19 has... Read More...

NC ward chief dies on his way to receive Dashain Tika, his wife dies hearing the news
16 minutes ago