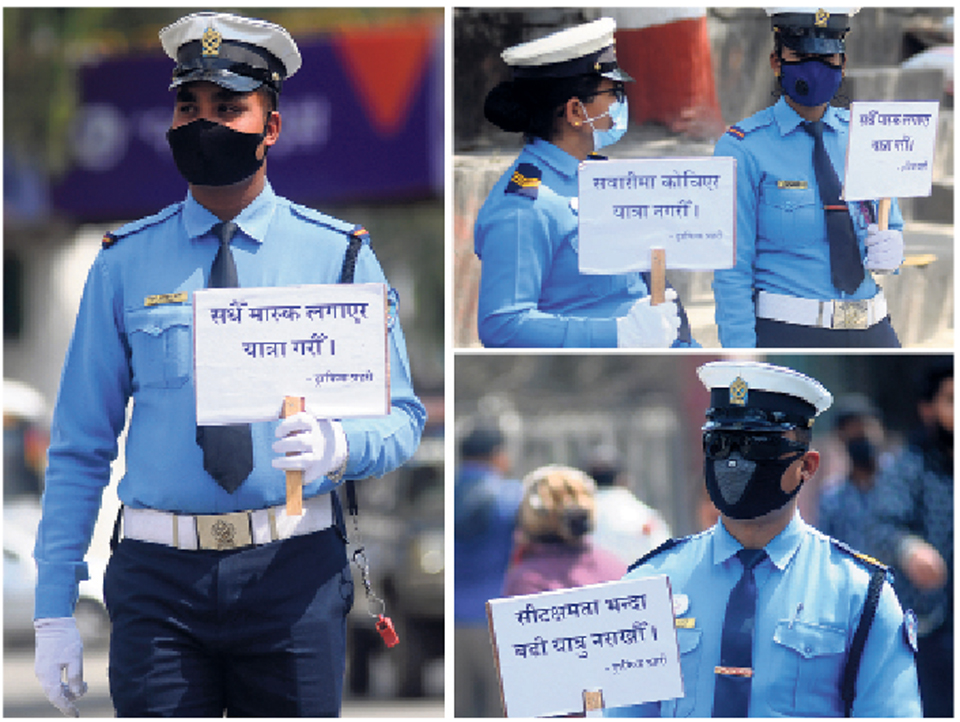 Traffic police officials holding awareness placards bearing useful messages about Covid -19 at different places in the Kathmandu Valley on Friday as part of their special initiative against the pandemic. Photo: Bijaya Rai/ Republica

KATHMANDU, March 21: Considering the growing global Coronavirus (COVID-19) threat, the Metropolitan Traffic Police Office (MTPO) has initiated a new drive for creating awareness against the disease-carrying signboards with safety measures to make the people aware about the spread of the virus.

Dozens of traffic police officials have been deployed at various places of the Kathmandu Valley carrying signboards that read various messages to make the people aware about the spread of the virus. “We have deployed more than 200 traffic police officials at 86 different spots in the Valley,” said Superintendent of Police (SP) Jeevan Kumar Shrestha, spokesperson for the MTPO.

Shrestha mentioned that most of these signs comprise measures that fall within traffic jurisdiction. “As the government has already been providing every kind of awareness to people about the virus we have majorly included measures that coincide with traffic jurisdiction,” he said. Some of the measures included are – wear face mask while walking on the road, avoid hordes, walk in a distance and do not get into a crowded vehicle. These officials have been well-briefed and instructed with all these preventive measures since the last few weeks and have also been strictly directed to wear masks and hand gloves on the field.

According to Shrestha, these police carrying such signboards have been positioned at places like bus parks, shopping mall areas and public places that often witness huge crowds. “We have deployed officials carrying signboards at crowded places as the chance of spread of this virus is high amid crowd,” he said.

All traffic police officials deployed across the Valley are also directed to personally instruct people for taking necessary precautions like wearing masks every time, not forming a crowd,  and maintaining certain distance while walking on the streets. Apart from this, drivers of public vehicles have also been instructed to keep as few people as possible and if any vehicle is found allowing more passengers, “Our officials have been asking public vehicle drivers to keep passengers as per the number of seats inside the vehicle. If more passengers are found, the vehicle operators shall be punished,” Shrestha mentioned.

This initiative by the MTPO that started from Friday has dragged an optimistic response from the public. “The effort might not seem immense but I'm sure it has helped in alerting a lot of people to apply the preventive measures on the road,” said Sameer Basnet, 21.  “We have to be on alert from every standpoint in situations like this. Nobody can afford to risk their own lives,” he said. Although any case of virus hasn't been reported so far, the government has been taking sturdy steps to prevent the spread of COVID-19 as Nepal lies among the high-risk zone for the spread of the virus.

The metropolis office has also set up hoarding boards at different locations of the Valley that show the signs, symptoms and preventive measures against the spread of the virus. Nepal Telecom has also started providing awareness message of coronavirus disease (Covid19) through calling ring back tones.

KATHMANDU, Jan 20: The Metropolitan Traffic Police Division (MTPD) has launched a civic awareness campaign in the wake of the... Read More...