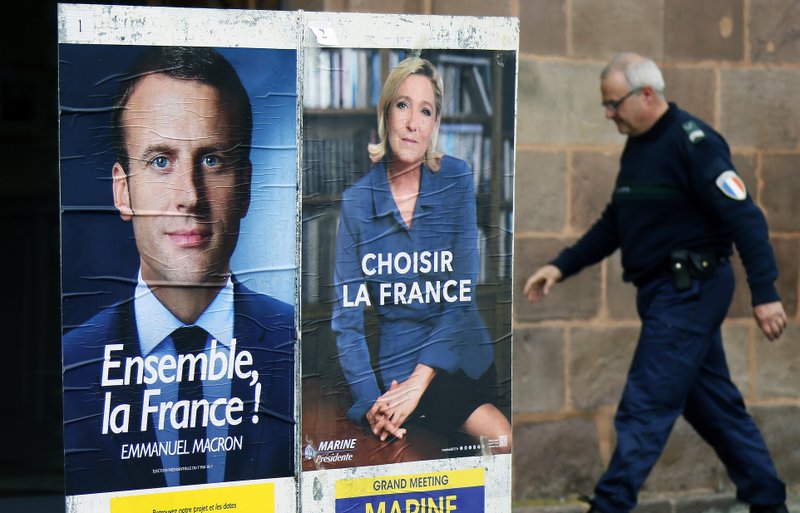 PARIS (AP) — The campaign of French presidential candidate Emmanuel Macron said it suffered a “massive and coordinated” hacking attack and document leak that it called a bid to destabilize Sunday’s presidential runoff.

His far-right rival Marine Le Pen, meanwhile, told The Associated Press that she believes she can pull off a surprise victory in the high-stakes vote that could change Europe’s direction.

Fears of hacking, fake news manipulation and Russian meddling clouded the French campaign but had largely gone unrealized — until late Friday’s admission by Macron’s campaign that it had suffered a coordinated online pirate attack had led to the leak of campaign emails and financial documents. It was unclear who was behind the hack and the leak.

The timing of the leak could be seen as either bizarre or inspired.

The documents’ release just before France enters a roughly two-day-long blackout - during which politicians, journalists and even ordinary citizens are meant to pull back from any public election talk to avoid swaying the vote - means that the leak may have very little impact beyond the overheated world of Twitter and Reddit.

On the other hand, the messages’ release just before France’s political machinery shuts down for the weekend might mean that talk of the leak - regardless of its veracity - will dominate dinner table conversations as French voters make up their minds Saturday.

Some experts see the Macron document dump as yet another sign of a “post-truth” society, one in which fake news, exaggerated tales and partisan talking points can crowd aside objective facts.

Dan Gillmor, a journalism professor at Arizona State University, calls it a global “war on reality” waged by partisans aiming to undermine public trust in, well, just about everything.

“One of their clear goals is to help demagogues and authoritarians who have contempt for democratic principles,” he said via email.

The candidates stopped campaigning at midnight Friday to give voters a day of reflection before the election. It’s a stark choice: Le Pen’s anti-immigration, anti-European Union platform, or Macron’s progressive, pro-EU stance.

Tensions marred the race right to the end.

Earlier in the day, anti-Le Pen crowds disrupted her visit to a renowned cathedral in Reims.

The presidential campaign has been unusually bitter, with voters hurling eggs and flour, protesters clashing with police and candidates insulting each other on national television — a reflection of the widespread public disaffection with politics as usual.

Le Pen, 48, has brought her far-right National Front party, once a pariah for its racism and anti-Semitism, closer than ever to the French presidency, seizing on working-class voters’ growing frustration with globalization and immigration. Even if she loses, she is likely to be a powerful opposition figure in French politics in the upcoming parliamentary election campaign.

In an interview with The Associated Press in the final hours of a hostile, topsy-turvy campaign, Le Pen said that win or lose, “we changed everything.” She claimed an “ideological victory” for her populist, anti-immigrant worldview.

“Even if we don’t reach our goal, in any event there is a gigantic political force that is born,” she told AP in her campaign headquarters. Her party “imposed the overhaul” of French politics and set the tone of the election, she said.

The 39-year-old Macron, too, played a key role in upending France’s traditional political structure with his wild-card campaign.

Voters liked the idea, and chose Macron and Le Pen in the first-round vote, dumping the traditional left and right parties that have governed modern France. Le Pen said those parties have been “blackballed.”

Many voters, however, don’t like either Le Pen or Macron. They fear her party’s racist past, while worrying that his platform would demolish worker job protections or be too much like his mentor, the deeply unpopular outgoing President Francois Hollande.

Le Pen, who was pelted with eggs Thursday in Brittany, was met by hecklers Friday at the Reims cathedral. She left via an unmarked door, putting her arms over her head as if to protect herself and diving into a black car.

Le Pen denounced her critics for disrupting a sacred place during her final campaign stop. The site has special meaning for her National Front party because it’s the cathedral where Charles VII was crowned in the presence of Joan of Arc — the party’s icon — at a time of war and division.

In the AP interview, Le Pen said she was confident she can bring the divided country together if elected.

“Yes. I want most of all to put democracy back in place ... we must re-weave the links among people.” She said.

Macron would worsen divisions, she claimed.

The pro-business Macron, who topped all vote-getters in the first-round, also has been booed and heckled frequently as he visited blue-collar workers.

Le Pen acknowledged to AP that she became angry at the debate but said she was merely channeling the mood of France.

Macron acknowledged the French are exasperated by the government’s ineffectiveness, but he dismissed Le Pen’s vision of an infuriated country.

She “speaks for no one. ... Madame Le Pen exploits anger and hatred,” Macron told RTL radio.

Leading French presidential candidate Emmanuel Macron's campaign said on Friday it had been the target of a "massive" computer hack... Read More...