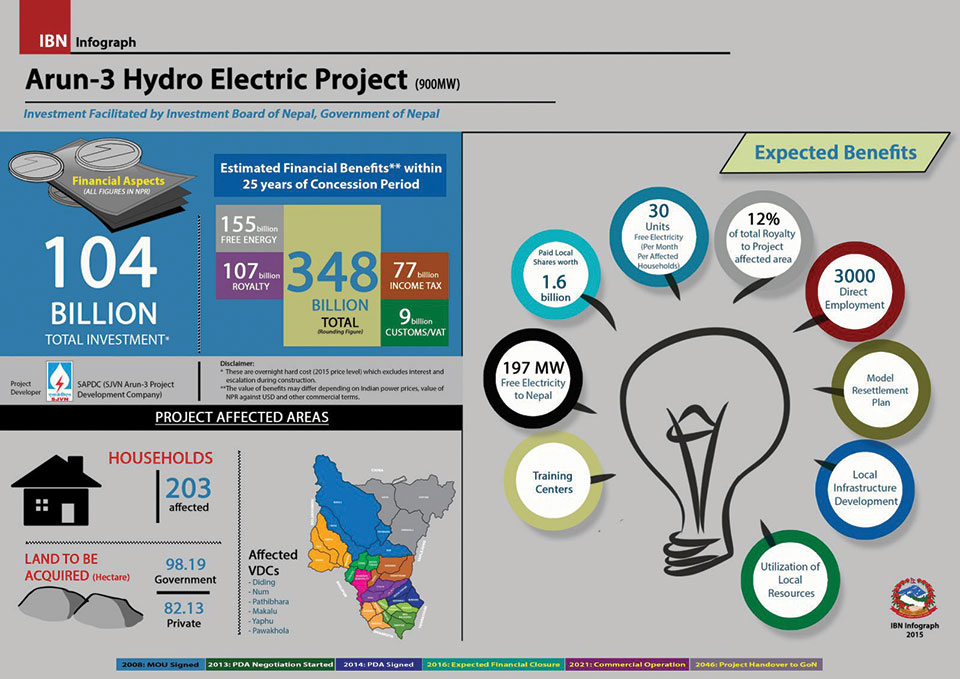 The project inked financial closure agreement with State Bank of India (SBI), Export-Import Bank of India (EXIM), Punjab National Bank (PNB), Canara Bank, Union Bank of India from India and Nepali banks Everest Bank and Nabil Bank in Kathmandu on Thursday. The seven banks have pledged a total of Rs 101.34 billion to the project in the form of structured debt. The total debt tied up with the banks is Rs 78.60 billion plus Rs 22.74 billion stand-by line of credit (if required), according to a statement issued by the project.

The mega project is estimated to cost Rs 111.36 billion. It’s per megawatt generation cost is Rs 123.7 million which s among the cheapest in Nepal.

Speaking at the signing ceremony, Nand Lal Sharma, chairman and managing director at SJVN Ltd, said that the construction work will expedite with the signing of financial closure agreement. “The project has already achieved about 30% work progress,” he added.

The government awarded generation license to the project in May 2018, and transmission license in last February.

According to the project, it has obtained all requisite clearances and approvals for execution of the project from the governments of Nepal and India.

The company claims that Nepal will get financial benefits of up to Rs 338.6 billion before the project is handed over to the government after 25 years of operation. It will provide 21.5% of energy, or 197.1 MW, to Nepal free of cost.

The project currently employs over 2,000 workers including about 1,000 Nepalis, according to Sharma. Around 3,000 people are expected to be directly employed during the project construction period, he added.

Also speaking at the program, Minister for Energy, Water Resources and Irrigation Barshaman Pun said that Arun-3 will be a milestone in hydropower development in Nepal.

The project has minimum peaking capacity of 3.40 hours.

The construction of the project has to be completed within five years of the signing of financial closure agreement.

SINDHULI, Feb 17: Sunkoshi Marin Diversion Multipurpose Project is preparing to provide compensation to locals that will be affected by... Read More...

KATHMANDU, Feb 6: The financial closure of Arun III hydropower project was inked in the capital on Thursday. ... Read More...