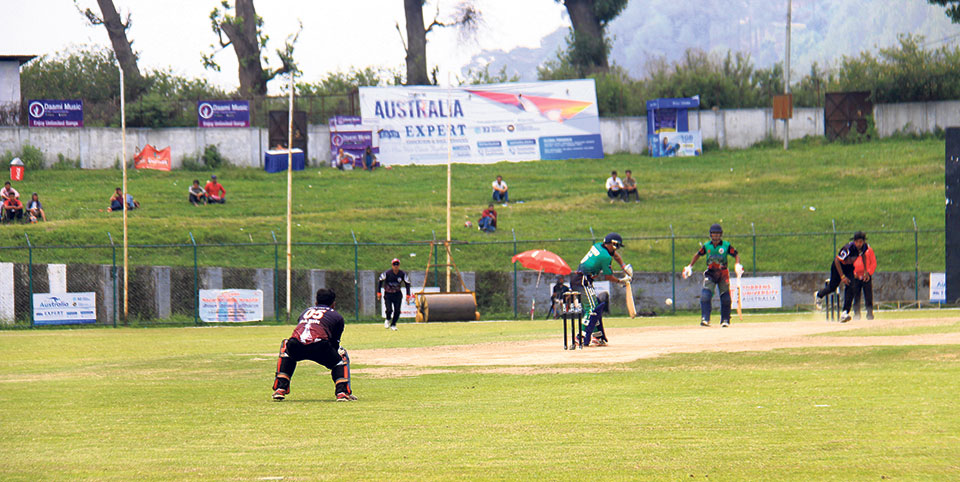 Army has reached its third consecutive PM cup final in three editions of the marquee 50-over event. Army was declared joint winner in the first edition with Nepal Police Club in 2017 after rain played the spoilsport in the final match. It lost the final match against Armed Police Force Club in the second edition held in 2018.

Alam was supported by pace bowler Karan KC’s two wickets whereas Susan Bhari, Rohit Kumar Paudel, and Kushal Malla shared a wicket each. Army fielders were ruthless in the field and scalped couple of great catches to start the defense. Alam took a blinder at mid-on to dismiss a mistimed on-drive from opening batsman Rabin Joshi who scored 8 runs. Similarly, Hari Bahadur Chauhan took a flying catch at long-on to dismiss Paras Khadka who was looking ominous in the game while racing to 19 runs off 16 deliveries including three boundaries.

Ishan Pandey played a lone innings of 79 runs off 117 deliveries which included three boundaries and four sixes. He was dismissed by Karan KC short-ball in the 47th over when he looked destined for the fourth century of the tournament.

The key wicket of Gyanendra Malla was brilliantly outfoxed by Susan Bhari inducing a sweep-shot straight to Kushal Malla’s hands who covered a fair bit of distance in the deep leg to complete the catch. Malla scored 26 runs off 33 deliveries which included two boundaries and a six.

Earlier, Province 3 had won the toss and elected to bowl first. It had won last three group games chasing the totals. However, Army, despite having a slow start with only 23 runs in the first 10 overs, gained momentum with Chauhan and Paudel’s innings. Chauhan scored 38 runs off 37 deliveries and Paudel contributed 43 off 35. Opening batsman Raju Rijal registered his third half-century of the tournament.

Captain Binod Bhandari scored unbeaten 75 runs to propel the Army total to unassailable 309 at the end of 50 overs for the loss of six wickets. Bhandari smashed five fours and five sixes during his 42-ball stay. He shared an unbeaten partnership of 63 runs with Kushal Malla who stayed not out on 26 runs off 17 deliveries. Similarly, Rajesh Pulami Magar, Karan KC, and Hare Krishna Jha contributed 29, 21 and 12 runs respectively to the total.

Nandan Yadav produced an unplayable delivery to dismiss Rijal before finishing his spell with two wickets. He was supported by Jitendra Singh Thakuri’s two wickets. Likewise, Khadka and Sonu Devkota shared a wicket each. Province 3’s most successful bowler of the tournament, Surya Tamang, was expensive in the math conceding 91 runs in 10 overs.

Group B winner Nepal Police Club will face Group A runner-up Armed Police Force Club in the second semifinal on Thursday. The winner of the match will clash against Army in the final on Saturday.

KATHMANDU, May 24: The Tribhuvan Army Club of Nepal Army has made a winning start to the 3rd Prime Minister... Read More...