Armless Syrian boy thrives in US, hopes family can join him 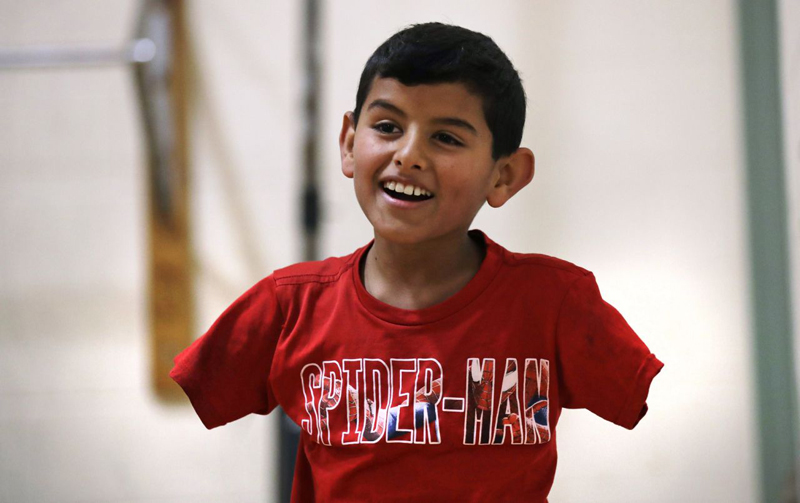 He attended Democratic President Barack Obama’s final State of the Union address as a special guest of a congressman. He learned to bike and rollerblade, took martial arts and gymnastics classes and spent his summer playing soccer and swimming in a lake at a day camp in the Boston suburbs.

And he received his first pair of prosthetic arms after his were blown off three years ago in a refugee camp bomb blast that also killed three of his siblings.

But as the 11-year-old Syrian boy looks to another year in his adopted home, he says his dream is to be reunited with his mother and four surviving siblings, who are living in Istanbul.

“I want my mom to come here,” he said on a recent Saturday as he kicked around a soccer ball in a park. “I feel like I’m losing her. It’s been too long. I can’t take it anymore.”

Ahmad’s father, Dirgam Alkhalaf, said those hopes largely hinge on whether Republican President-elect Donald Trump follows through on his pledge to curtail the flow of Syrians and Muslims to the U.S.

Alkhalaf has applied for asylum and hopes to petition for the rest of the family if he and Ahmad are permitted to stay.

“I can only be hopeful he’ll do the right thing,” Alkhalaf said of Trump through an interpreter. “No matter what people say, I’m optimistic.”

“There is nothing left in Syria for us. Our home is destroyed; the government is out to get us,” he said, referring to Syrian President Bashar Assad’s regime, which he says conducted the 2013 bombing. “I’ve got nowhere to go if the U.S. doesn’t want me.”

The father and son have been living among a rotating group of Muslim families since their arrival in June 2015 on a medical visa for Ahmad.

Alkhalaf works as a security guard at a mosque after receiving his work permit in July. He hopes to take his driver’s license exam soon.

The emotional strain of separation has taken its toll on the family, Alkhalaf said.

His youngest son in Turkey has developed asthma-like problems, his wife is being treated for high blood pressure and Ahmad doesn’t always sleep well, a problem that started with night terrors following the bomb blasts.

“Emotionally, I’m drained,” Alkhalaf said. “If we were all together, I think a lot of us would feel better. It’s half the battle.”

Ahmad talks with his mother often and knows she’s struggling to provide for his siblings.

The family largely lives off the charity of the Muslim community in New England and what Alkhalaf can send from his wages.

Ahmad said he tries to perk his mother up by telling her about the new things he’s experiencing.

He enrolled in the fourth grade this past fall at a school in the Boston suburbs. He is awaiting a more advanced pair of prosthetic arms. And he hopes to join a soccer team this spring.

Officials at Heights Elementary say Ahmad’s stresses haven’t appeared to affect his schooling. If anything, they say, they’re impressed with how quickly he has embraced his new environment, where he is receiving physical and occupational therapy, one-on-one reading and math help and other support.

“He really wants to talk to people and understand things on many levels,” said Holly Geiger, Ahmad’s teacher. “He’s not shy, and I think that’s helped.”

Supporters have purposely jam-packed Ahmad’s schedule, said Nabil Jalal, a Sharon resident who is among those helping Ahmad and his father.

As Ahmad ran off to join an arts and craft session, Jalal worried what the new year might bring.

“You can’t have one parent and not the other, no matter how good the life is here,” Jalal said. “There’s a big missing part.”