Arghakhanchi farmers made Rs 3b from dairy and meat 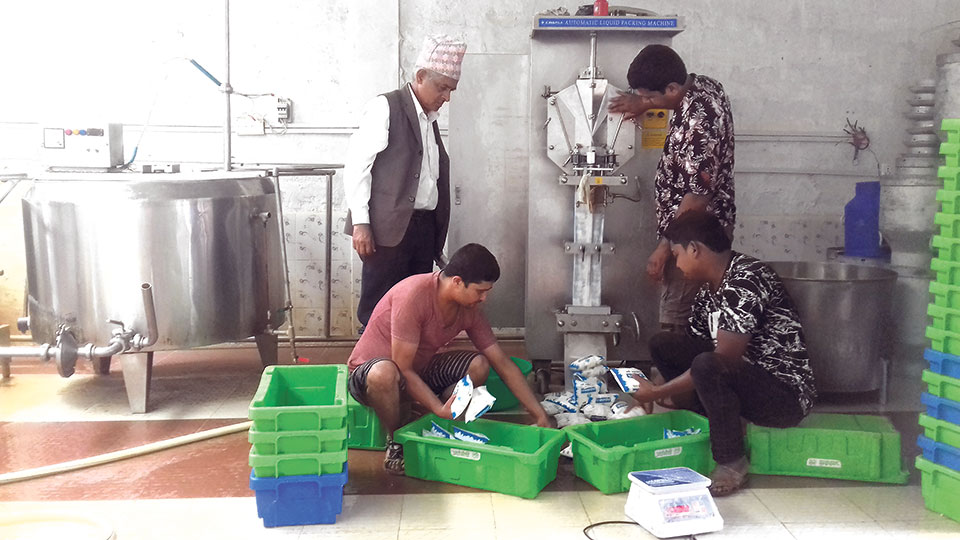 Milk being packed at the cooperative.

After fully meeting internal demand, the district is even supplying meat and dairy to other districts such as Palpa, Gulmi and Rupandehi.

According to Lok Nath Paudel, chief of the District Livestock Service Office (DLSO) Arghakhnchi, 29.36 million liters of milk was produced in the district in Fiscal Year 2016/17, worth Rs 1.5 billion. Paudel expected the production this year to exceed last year’s figure.

Farmers in the district channel the supply of milk via the Arghakhanchi Dairy Producing and Supplying Cooperative. The cooperative collects an average of 1,500 liters of milk every day and supplies it to Butwal sub-metropolitan city in Rupandehi district every two days.

President of the cooperative, Chandra Prasad Banjade, told Republica that the district could be made prosperous by expanding the dairy sector. “If the district had proper collection and transportation facilities, it could export up to 10,000 liters of milk daily. At the moment, it is not feasible to supply milk produced in rural parts to other urban centers,” he said.

The cooperative aims to further involve farmers from rural parts of the district into dairy farming. It has directly employed 10 persons and has indirectly created job opportunities for about 500. Banjade however mentioned that the cooperative was in need of a chilling vat of about 5,000 liters and a tanker capable of storing 3,000 liters of milk. Banjade stated that it was important for local level units to pay attention to promote such cooperatives as dairy production has great potential in creating jobs at the local levels.

Farmers, especially youth, have also been attracted towards rearing goat, poultry, pig, and lamb. FY2016/17 saw production of 2,700 tons of meat, according to district livestock chief Paudel. The district had produced around 1.5 billion worth of meat that year.

Paudel told Republica: “After the Goat Mission Program, the district has become independent on meat. The number of animal farmers has been increasing these days. Suppliers purchase goats from farmers, going door to door. The farmers too have been receiving good prices these days.”

Meanwhile, general secretary of the Meat Sellers Association Arghakhanchi, Ramu KC, said that due to an increased interest of farmers toward animal husbandry, suppliers too have been relieved.
“Entrepreneurs now don’t have to travel great distances to purchase livestock. They can simply go to the villages from where they can easily purchase animals,” he said. KC however stated that lack of a slaughterhouse had made things difficult for the farmers and traders.

Made in Fukushima: Japan farmers struggle to win trust

The pumpkin is diced, the chicken carved and the eggs beaten into an omelette, but the people preparing the food... Read More...

NUWAKOT, July 17: The District Livestock Service Office (DLSO), Nuwakot, has announced that the district has become self-sufficient in meat and... Read More...