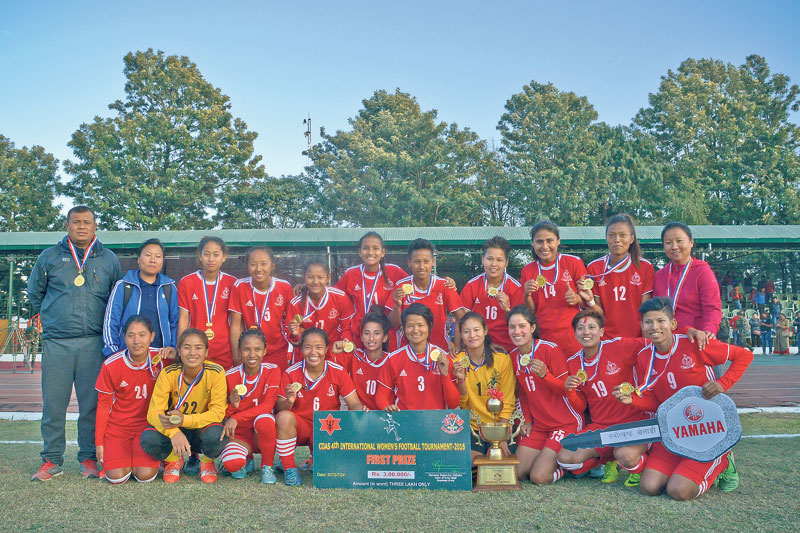 KATHMANDU, Nov 9: Armed Police Force (APF) has defended the title of the Chief of Army Staff Fourth International Women's Football Tournament registering a 3-1 win over Central Region in the final on Wednesday.

In the summit clash held at Tribhuvan Army Club's ground, Lagankhel, Sabitra Bhandari netted a brace while Anita Basnet scored another in APF's win. Nisha Thokar notched a consolation goal for Central Region which became the first non-departmental team to make it to the final of the tournament.

Central Region, which had defeated mighty Army team in the semifinal, failed to repeat such feat in the final.

In the second half, Central Region cut the deficit 2-1 with Nisha's brilliant free kick in the 66th minute. Referee had given the freekick to Central region after APF's Gita Rana Magar fouled striker Rashmi Kumari Ghising and Nisha beautifully converted it.

Central Region's hope of getting back into the game was given a blow when Anita scored APF's third goal in 82nd minute. With the third goal, APF also sealed the 3-1 victory and lifted the winners' trophy for the second consecutive year.

Sabitra, who netted 13 goals in the competition, was declared the best player of the tournament and was handed a scooter for her feat.  “Despite scoring twice in the match, I couldn't play to my level due to thigh injury. However, other players performed well,” said Sabitra.

She said that her team capitalized on the poor fitness level of opponent team in the final match. “Central Region is very good team and has good coordination among players.

However, the fitness level was poor and we capitalized on the very aspect,” added Sabitra.

Previously, she had won the best forward award in the Women's Football League and third edition of this tournament.

Central Region's Aanjana Rana, who was declared the best goalkeeper of the tournament, said that her team materialized its dream of registering win over departmental team. “Our target was to make it to the final defeating a departmental team and we succeed. We had sound coordination along with hard work against Army in the semifinal. However, lack of experience cost us in the final match,” said Anjana. She had saved Army's three penalties in the semifinal match. Anjana was also declared the best goalkeeper in the Coca Cola Cup Inter School Football Tournament when she won that tournament with Durga Secondary School of Rautahat.

Sabitri Bhandari of APF poses for a photo after winning the best player of the Chief of Army Staff Fourth International Women’s Football Tournament at Army Sports Complex in Lagankhel, Lalitpur on Wednesday.

Similarly, Saru Limbu of APF, Nisha Thokar of Central Region and Sumitra Yonjan of Army were declared as the best forward, best defender and best midfielder of the tournament respectively. Likewise, the winning side's head coach Janak Singh Tharu was given the best coach of the tournament award. All of the best players and coach were handed Rs 10,000 each.

Central Region's head coach Nura Raj Kafle pointed out to the lack of regular training time and insufficient rest ahead of the final behind his team's defeat. “Our team doesn't train regularly like APF. Most of the players of the team are school-level students. They couldn't get enough rest ahead of the final. So we failed to replicate the semifinal form.

We will learn from this and prepare for the next edition,” said head coach Kafle.

Altogether nine teams including eight Nepali teams and one Indian team had participated in the tournament which offers the biggest cash prize in the Nepali women's football.

Indian team that came from Sikkim couldn't progress from the group stage. Winner APF won a purse of Rs 300,000 while runner-up Central Region was handed Rs 150,000.

Similarly, semifinalists Police and Army were given Rs 50,000 each. Chief of Army Staff General Rajendra Chettri distributed the prizes to the winners.