APF comes from a set down to beat Army 3-2 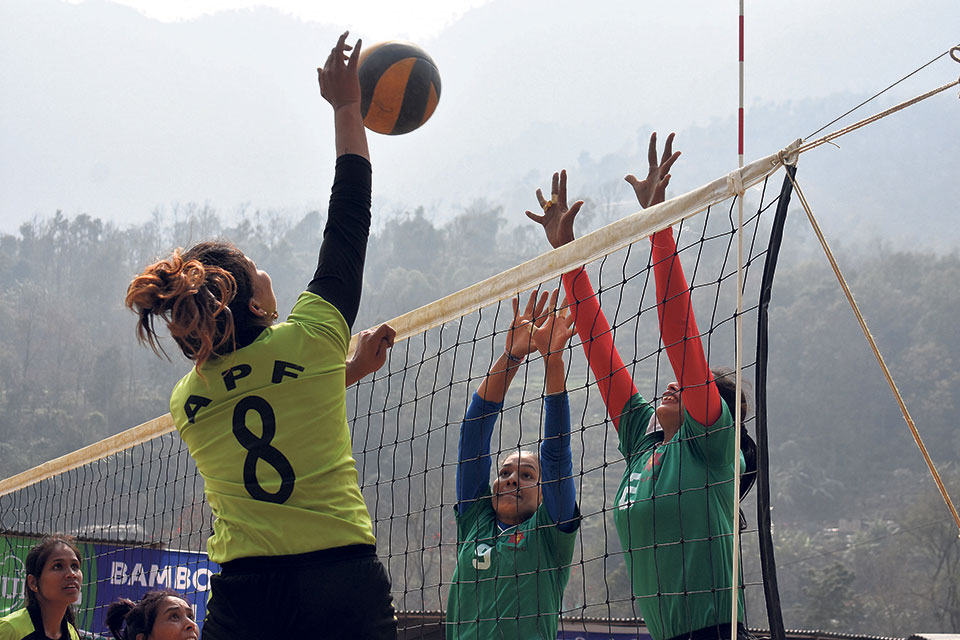 PARBAT, Feb 20: The departmental team Tribhuvan Army Club has advanced to the semifinals as runner-up after failing to hold on to its lead twice in the same set in the fourth Didi-Bahini Cup National Women’s Volleyball Tournament in Parbat on Tuesday. It lost the game 3-2.

In the tournament which kicked-off on Wednesday in Beni, Army was limited to the Group A runner-up after it failed to defend its lead twice in the same set against the Armed Police Force (APF) Club. Only two teams were in the group and Army lost the battle eventually.

In the tournament organized on the occasion of the 13th Gandaki Province-level Women’s festival, Army won the first set 25-21 and created pressure on the strong APF side. Army then failed to carry on the first set momentum and lost the second set 25-17.

Army was close to taking a 2-1 lead after APF started the third set with poor defense as Army won the set 25-17.

Army, which reached close to the win, displayed a forgettable performance. APF won the fourth set 25-9 and equalized the game 2-2.

In Group B, Nepal Police Club and New Diamond Academy have made their semifinal bids stronger with wins.

New Diamond beat the host Radio Didi-Bahini 3-2 to start the tournament on a winning note, while it faced loss in the second game against Police. Likewise, New Diamond started its campaign on a win as it beat Didi-Bahini on a straight set in the day’s first match.

New Diamond will now have to wait for the result of the Police game against Didi-Bahini to see who goes through. Both Police and New Diamond have three points each, while Didi-Bahini has none.

Both the semifinal matches will be played on Thursday. The winner of Group A will face Army, while the runner-up will take on the Group B winner APF.

Manang back in title contention after beating Sankata