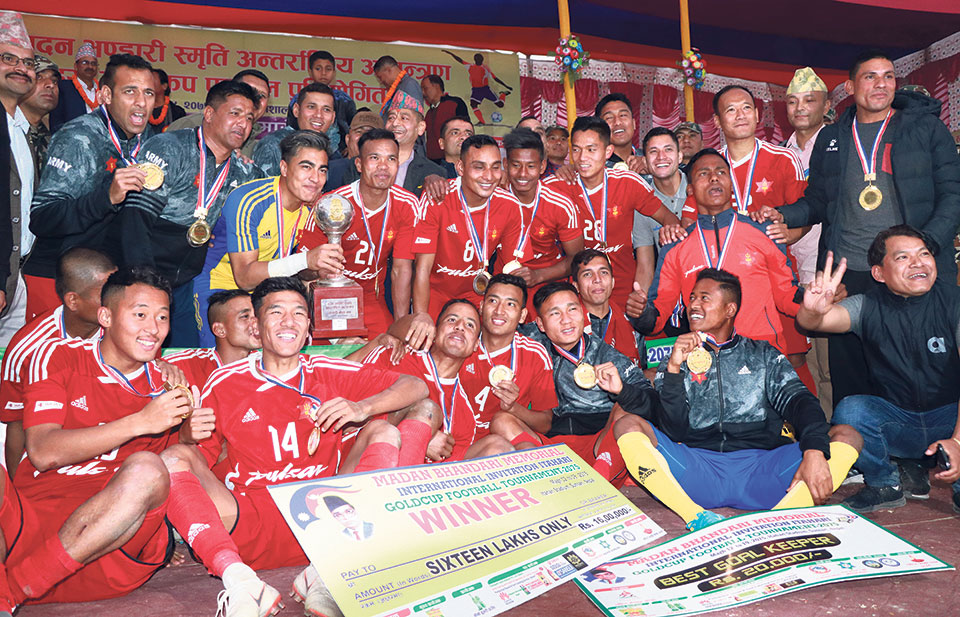 At the Itahari Stadium, Army kept Manang under pressure throughout the game and the first division winner could not play as expected. Tanka Basnet and captain Bharat Khawas helped the departmental team win the title.

Army took the lead through Basnet in the sixth minute of the match as he scored a wonderful goal from outside the box initially resulting from a corner. Army was ahead 1-0 at the end of the first half.

In a tense encounter between the two heavyweights in Nepali football, seven players were given yellow cards. Manang’s Afeez Olawale became the only player in the tournament to see a red. He was given the marching order after he fouled Army keeper Bikesh Kuthu inside the box in the 25th minute.

Captain Khawas sealed the game with a goal in the last minute of the injury time as he finished a one-vs-one chance.

Army’s Bimal Pandey became man of the match in the final and bagged a purse of Rs 10,000.

Army’s Bikesh Kuthu, Santosh Tamang, Khawas and Chum Bahadur Thapa were named the best goalkeeper, the best midfielder, the best forward and the best coach of the tournament respectively.

Suraj Bishwokarma of Manang was adjudged the best defender. They all got Rs 20,000.

The host Rastriya Jagriti Club’s Umesh Rai, who was named the rising talent, got a 24-inch TV.