Another bus falls into Trishuli killing 22 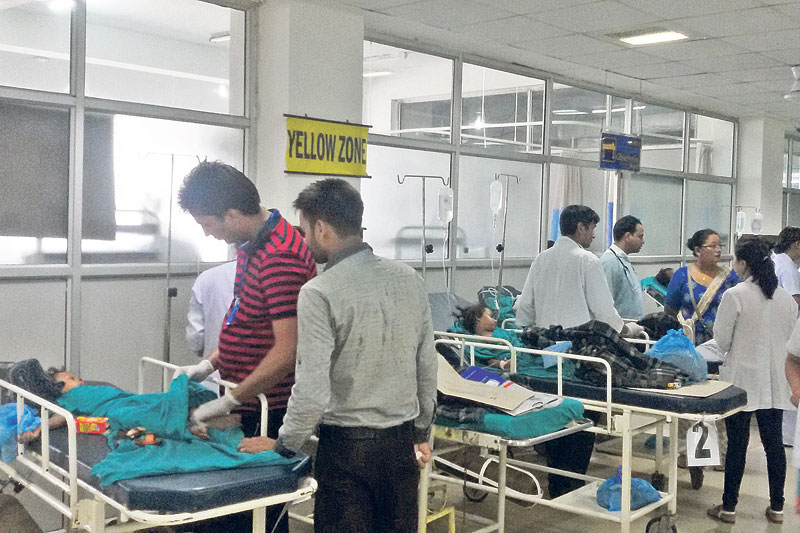 Doctors attending to the injured people at Bharatpur Hospital after the bus they were travelling on from Gaur to Pokhara fell off the road at Kalikhola in Narayanghat-Mugling road section on Friday morning.(Narayan Adhikari/Rss)

CHITWAN, Aug 27: In yet another major road accident, at least 22 people died and 17 others sustained severe injuries when a night bus veered off the road and plunged into Trishuli River near Kalikhola of Chandibhanjyang VDC-5 along the Narayanghat-Mugling road in Chitwan district at around 4 am on Friday.

The passenger bus (Ga 1 Kha 3709) was en route to Pokhara from Gaur, the district headquarters of Rautahat when it plunged about 200 meters down. Around 39 passengers had boarded the bus from Gaur.

As many as 21 passengers died on the spot while one passenger succumbed in the course of treatment, according to a press statement issued by the Ministry of Home Affairs (MoHA). Majority of the victims are from Rautahat district. Nine Indian nationals are also among the deceased, according to Gaur-based bus ticket counter.

The cause of the accident has not been ascertained as the road from where the bus skidded off looks to be in good condition and wide enough. While some survivors have blamed the driver's negligence for the accident, police said other factors might also be responsible.

“Maybe the bus driver took the bus too far on the edge while giving passage to another vehicle coming from opposite direction. We are trying to determine the cause of the accident,” said Police Inspector Rajan Bhetwal, chief of the DPO.

However, Sheikh Meraj of Rautahat, who was sitting in the first row of passenger seat at the front of the bus, said he did not notice another vehicle in the opposite direction when the bus veered off the road.

“Investigation is underway and we will be considering all the possibilities,” said Superintendent of Police (SP) Basanta Kunwar of the DPO.

Nepal Army, Armed Police Force and other teams had jointly carried out rescue work. Around 17 passengers were rescued from the incident site, out of which one died while undergoing treatment.

Police learnt about the accident after a quick phone call from Ritesh Thakur, one of the passengers. Police rescuers reached the accidet site soon after the phone call.

“The injured have been rescued and sent to a hospital in Bharatpur for treatment," informed Deputy Inspector General (DIG) Pashupati Upadhyaya, in-charge of Mid-Western Police.

By Friday evening, the identities of 17 of the deceased have been ascertained, according to the District Police Office (DPO), Chitwan. Among the deceased are Rakesh Yadav, Promod Rai, Rajesh Prasad Yadav, Jogendra Giri, Chitranjan Yadav, and Shankar Thakur, all from from Rautahat; and Chekan Thakur, Shankar Thakur, Ram Sagar Bhagat of India.

44 dead as bus falls into gorge in northern India

NEW DELHI, April 19 A senior government official says 44 people have been killed after a bus swerved off a mountain... Read More...