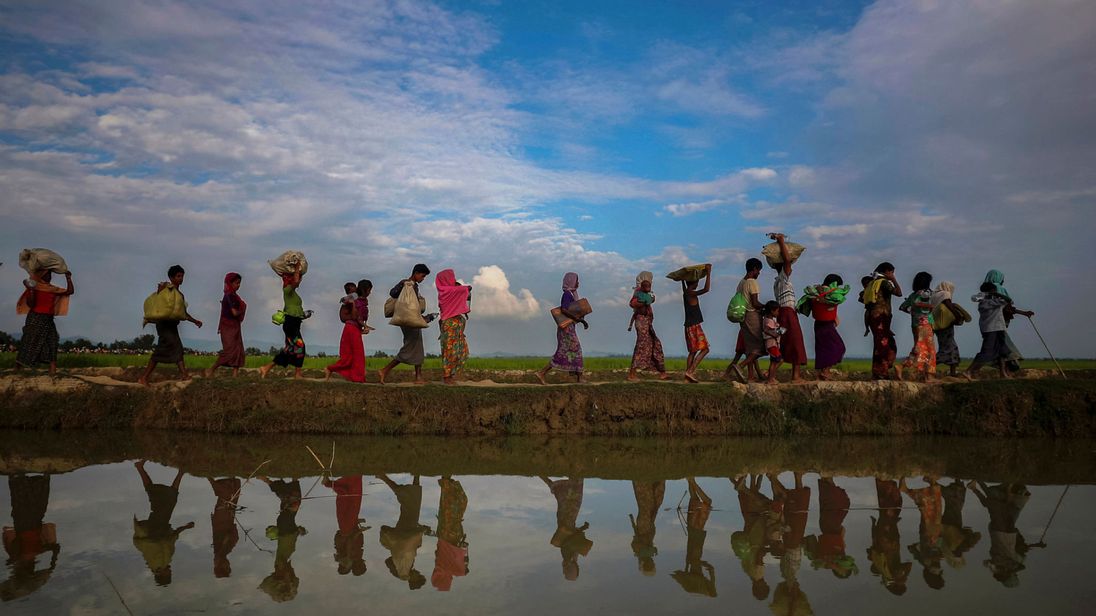 BANGLADESH, Aug 26: Refugees in Bangladesh held demonstrations and prayers on Saturday to mark the passing of a year since the outbreak of a conflict in western Myanmar’s Rakhine state that drove hundreds of thousands of Rohingya Muslims from their homes.

Across the border in Myanmar, the government said security patrols had been increased in the conflict area ahead of the anniversary for fear of further violence. Members of the mostly Buddhist Rakhine ethnic group and Hindus from Rakhine state said they would hold events to remember those killed by Rohingya militants in attacks that triggered the crisis.

Thousands of refugees, from children to the elderly, marched prayed and chanted slogans in events across the sprawling camps in southern Bangladesh. Many wore black ribbons to commemorate what they said was the start of the “Rohingya genocide”.

“We prayed the morning prayers inside our house over the sound of bullets. We were so scared,” said Aisha, 47, one of dozens of women at a gathering in the Kutupalong camp, recalling the outbreak of the conflict.

After the Arakan Rohingya Salvation Army (ARSA) attacked 30 Myanmar police posts and a military base in the early hours of Aug. 25, 2017, Myanmar troops swept through villages. Around 700,000 Rohingya have since fled, according to United Nations agencies.

Rohingya who crossed the border reported killings, rapes and arson carried out by security forces, in what the UN’s top human rights official said seemed to be a “textbook example of ethnic cleansing”.

The government of Nobel laureate Aung San Suu Kyi has denied allegations of atrocities made by the refugees, saying that security forces lawfully suppressed Muslim militants in Rakhine.

Government spokesman Zaw Htay told Reuters on Friday that Myanmar did not tolerate human rights abuses, and had set up a commission of inquiry that included two veteran international diplomats to look into the Rakhine crisis.

International pressure on Myanmar has been growing, however. U.N.-mandated investigators are set to publish a report on the crisis on Monday and the United Nations Security Council will hold a briefing on Myanmar on Tuesday.

In a statement ahead of the anniversary, 132 sitting parliamentarians from five other countries in Southeast Asia issued a statement calling for Myanmar officials to face trial at the International Criminal Court (ICC).

The ICC is currently considering whether it has jurisdiction in the crisis. Bangladesh is a member of the court, but Myanmar is not.

“We are very, very concerned about the possibility of terrorist attacks and we’ve already picked up security enforcement,” said Zaw Htay.

ARSA said on Saturday it would “continue our struggle for our right to exist”.

The group had “come to existence only to defend, salvage and protect Rohingya people” from the Myanmar government and military, it said in a statement attributed to its chief, Ata Ullah, and posted on a Twitter account previously used by it.

In the Rakhine state capital of Sittwe, the state’s biggest political party, the Arakan National Party, held a ceremony to commemorate security personnel and Rakhine and Hindu people they say were killed by Rohingya insurgents in the attacks.

In Myanmar’s main city, Yangon, another group said it was holding a prayer ceremony at a Hindu temple later on Saturday.