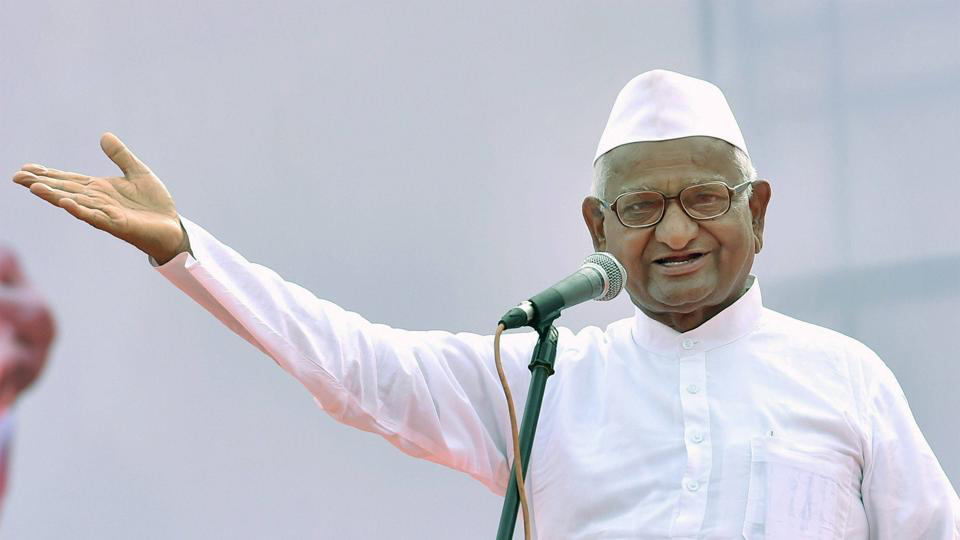 NEW DELHI, July 29: Expressing dissatisfaction over the delay in the appointment of Lokpal at the Centre, social activist Anna Hazare on Sunday said he will launch a hunger strike from October 2 against the Union Government. Speaking to media on Sunday, the social activist said, “I will go on a hunger strike from October 2, the birth anniversary of Mahatma Gandhi, at my native Ralegan Siddhi village in Ahmednagar district of Maharashtra.” He also appealed others to join his campaign for a corruption-free country.

Criticising the NDA government at the Centre, Hazare said, “there is a lack of will in this government to curb corruption and hence it is giving a lot of reasons and delaying the appointment of the Lokpal.”

Hazare, who had launched the campaign for a corruption-free India, had earlier launched a 12-day hunger strike in 2011. He later launched a fast, which attained mass support across the nation.

The apex court earlier this week also expressed dissatisfaction over the government’s response on the appointment of search committee members for a Lokpal. The Centre had earlier told the court that the Lokpal selection committee, headed by the prime minister, was scheduled to meet to set up a search panel for recommending a panel of names for the appointment of the anti-graft ombudsman and its members.

The government said the search panel would lay down its procedures, following which the selection committee would fix the time frame within which the names for selecting the chairman and members of the Lokpal would be recommended. The committee comprises the prime minister, the chief justice of India, Lok Sabha speaker, the leader of the largest opposition party and an eminent jurist.

The apex court, in its last year’s verdict, had said there was no justification to keep the enforcement of Lokpal Act suspended till the proposed amendments, including on the issue of the Leader of Opposition in Lok Sabha, were cleared by Parliament.

The UPA government had passed the Lokpal Bill in the Parliament in January 2014.

LUMBINI, Dec 19: The wage and contract-based employees at the Lumbini Development Trust have launched fast-unto-death to protest the management's... Read More...