An ordinary man unknown to the world 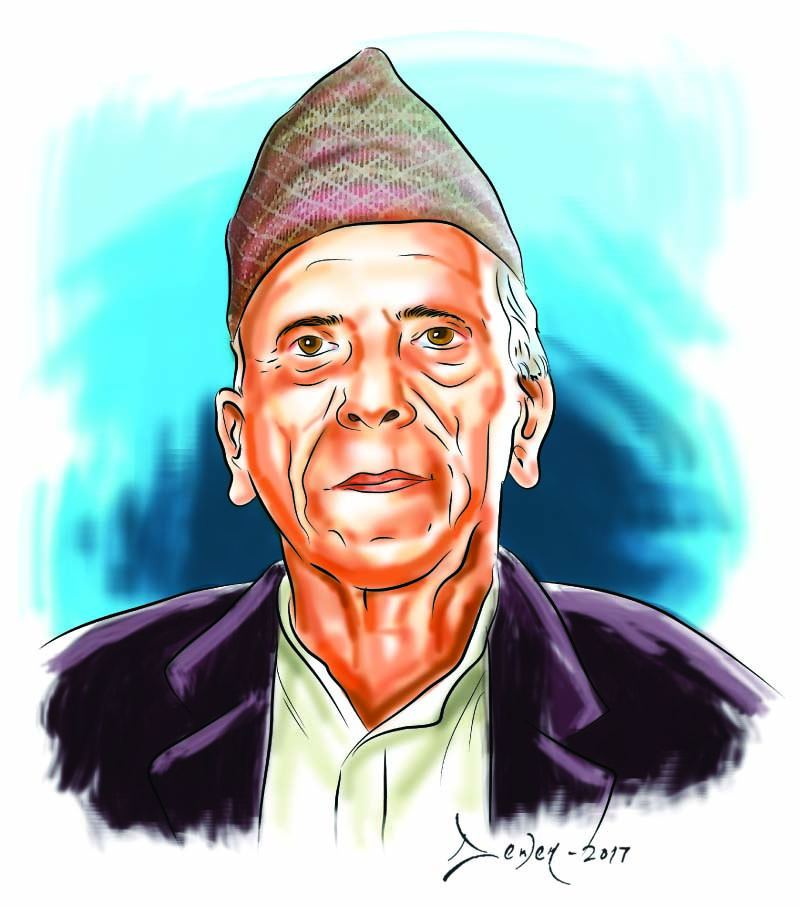 “I was born on the same day as King Birendra!” He would announce proudly during the heyday of monarchy. After struggling with asthma and lung failure, Thulba, as we fondly called him, passed away peacefully at 75 last Tuesday. Tika Dutta Ghimire was an ordinary man, humble and unknown to the world, to our family; he was a patriarch, and the keeper of our family traditions.

As fire engulfed his body at Pashupati Aryaghat, all the good times we spent with him back in the village kept on interrupting the eerily silent crowd of villagers gathered there.

My earliest memories of him are performing puja at home and putting tika on us afterwards.

As a child, we would go to him for comfort in cases of a horrible toothache or an upset stomach. His mantras and water, mixed with ashes, were our panacea for every illness in the family in a remote village in Gorkha where basic medicine during those days was still a luxury.

In times of grief in the family, he would be the consoling figure who took refuge in Sanskrit verses from the Purans.

This time, however, we were ones left with that void, those of us who are young as well as our elders.

He was his four younger brothers’ keeper. My uncles and my father would often go to him for advice and support. Any questions we had regarding our family tradition were always answered by Thulba. In a way, he was our family’s living Wikipedia.

On that day in Aryaghat, my youngest uncle watched Thulba’s body consumed by fire in the pyre. I tried reading his face, dotted with wrinkles and the visible pain of loss of his oldest brother. Perhaps he knew he too was fading and that must have hit him hard, but there were no words to describe his lament.

Thulba was a devout Hindu: ate only after taking his shower, and always put on white dhoti. Never ate chicken, egg and pork, worshipped cow and observed major Hindu festivals with full rituals as per the Hindu scripture.

After my bartabanda, he lectured me for months on the importance of this rite of passage and the responsibility of the oldest son in the family. As a ten-year-old, it felt overwhelming and scary as I was not ready to take on any such role. But I listened as did so many others who recognized the weight and authority of his words.

In 1960 he helped found Darbar Primary School in Arupokhari, Gorkha where he began as a teacher, eventually becoming its headmaster. Later he became the secretary of our village under the Panchayat rule.

I don’t know if he had higher aspirations to seek political office, but he would often brag to us about his days as village secretary during the Panchayat. We were too young to understand reasons for him reminiscing about his “good old days.” He would tell us how people never questioned his authority and how things were in “order.” I never bothered to question his assumptions. We just enjoyed his stories.

Thulba grudgingly came to terms with the changes in our societal structure, especially doing away with the untouchability. He viewed these changes as temporary and believed our society would go back to the system once we had come to our senses.

Despite the changes, the “untouchables” who tilled his land and helped in other agriculture works maintained they did not want to cross Thulba. They chose to honor that old unspoken rule to avoid conflict. They would not enter his house and ate outside his. In spite of their right to object, I never heard the workers complain about the arrangement with Thulba. Perhaps they were scared to share the pain or they simply took it as a lost cause. I still don’t know what and how they felt about him.

Born to a humble Brahmin family in remote village in Gorkha, Thulba never wanted to live in Kathmandu. He spent the final decade of life shuttling between Kathmandu and Gorkha. Kathmandu was home to his sons while Gorkha remained home of his daughters’. It was only his illness that forced him to be here in Kathmandu for the last two years. Every time I met him in the city, he would bemoan all of us leaving the village for city life. He wanted to return soon after he recovered, but it was never meant to be.

I went to see him a few weeks back. He was still strong, his confident voice rising from his now frail body. I could see the pain in his eyes. He never wanted to live with the oxygen pipe 18 hours a day, unable to move from bed. I took him to the nearby hospital. Deep inside, I felt that would be my last ride with him.

While we were there the doctors suggested amputating his right leg below the knee as it had started to rot from the lack of blood circulation, he vehemently refused. He said he would not want to live such a life. His sons took him to their home afterwards. It was the very last time I would see him in this life.

Tough hilly terrain and hard life in the village hardened him. He was tough, honest and a straight shooter. He never hesitated to speak out his mind. If he had grand ambitions in life, I never knew about it. He lived a simple life, true to his roots.

But for all of his edges, my Thulba was also a kind hearted man. He believed in good karma and never wanted to hurt anyone. I never saw him yell or raise his voice against another.

When he finally left us, it was sudden and without pain. Perhaps the ease came in part because of his desire to finally meet King Birendra and share his excitement for the fact they had entered the world on the same birthday. They were men of same time, same age and era.

American poet Elizabeth Bishop wrote in 1976, “The art of losing isn’t hard to master;/so many things seem filled with the intent/to be lost that their loss is no disaster.” This stanza has been my refrain over the years as I have sought to relinquish the values that hold us back, and it has served me well. But there is something to the stubbornness of my Thulba that makes me hold on in this moment of loss and grief.

The virtue of his sheer grit.
His devotion to his family.
His unflinching honesty.

It will be up to those of us who remain to learn the art of losing the old world without sacrificing what made Thulba and the ones who shaped our tradition truly honorable and great.

Thulba may be gone but the ethos of love he embodied remains ours to uphold and claim.

Spectrum: An artist’s view of world

In 'world first', man born without hand gets one

Warsaw, Dec 23: Surgeons in Poland said Thursday they had successfully attached a hand from a deceased donor to a man... Read More...

President confers decorations and awards on 903 individuals
13 minutes ago

4.4 million doses of Vero Cell vaccines arrive in Nepal on Friday
1 day ago