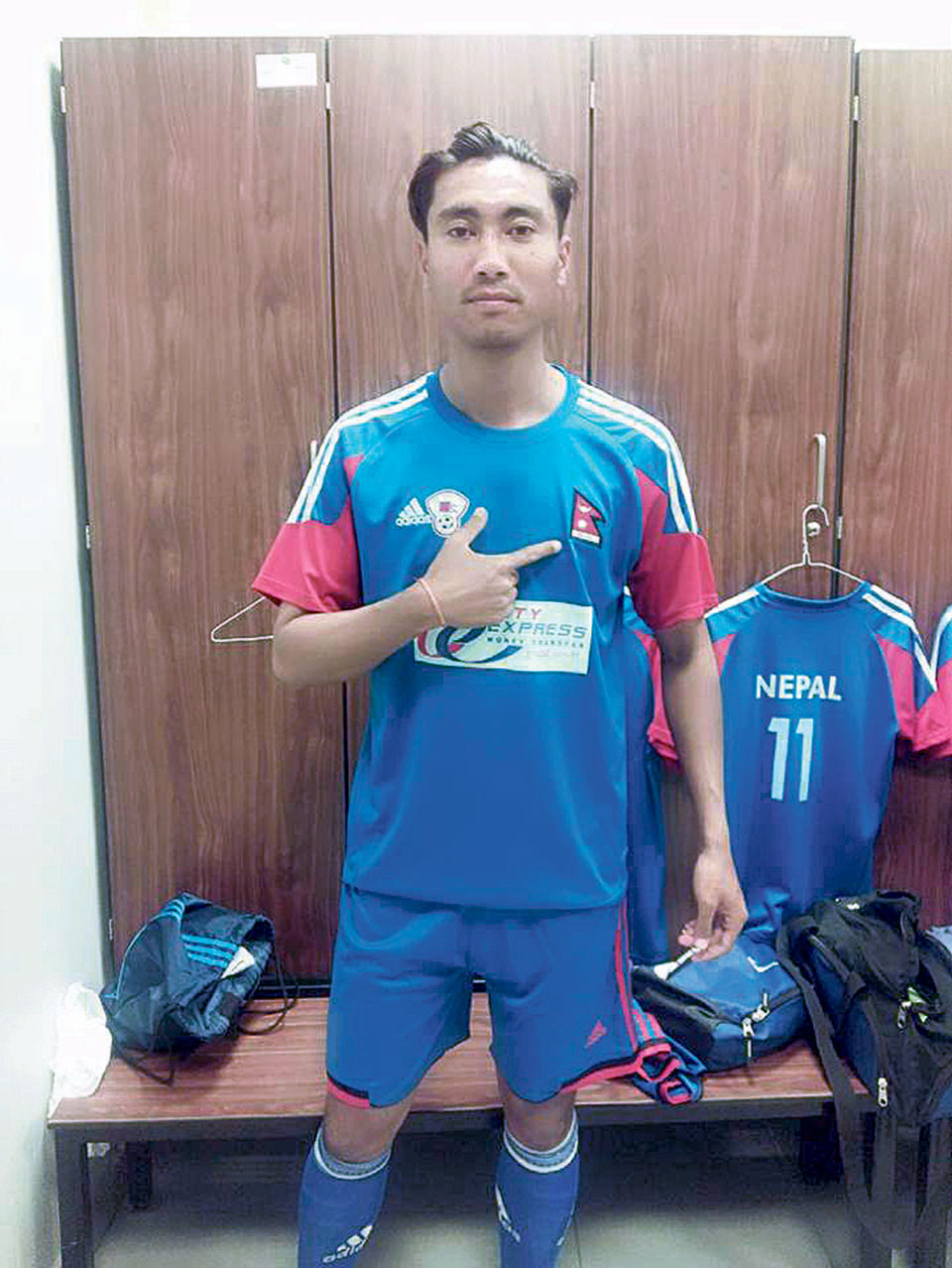 KATHMANDU, Oct 27: The world football has seen many factory workers and other job holders turning into top professional footballers. Jamie Vardy is one such example of recent times.

The Leicester City striker used to be a factory worker at one point in life. He later became an English football star, helping his team to lift the English Premier League title in 2015/16 season.
Like Vardy’s, there are several successful stories of players’ journeys to professional football from other jobs.

Amir Shrestha (third right) and Shiva Shrestha (second right) among other former Nepali domestic footballers pose for a group photo during the Asian Communities Football Tournament in Qatar in this file photo.

However, the scenario is different in Nepal with many young football stars leaving the sport in search of better future in other sectors.

Most of such players have been leaving the country in search of jobs abroad, leaving their peak playing careers in lurch.

More than a dozen players having an experience in Nepali top-tier football (A Division League and National League) are in the Gulf countries at the moment.

There are many other who gave up their playing careers in Nepal in search of better lives in Europe, United States, and Australia.

Amir Shrestha, 28, is one such footballer who gave up his playing career at a young age. He left Nepal in 2015 in search of a better future in the Gulf.

Amir, who has experience of playing for several A Division sides including Manang Marsyangdi Club (MMC), works as an excavator operator in Qatar.

Winger Amir, who was given a nickname of Nepali Cristiano Ronaldo due to his blistering pace and technical skills, was an established player in domestic football. He even used to get call-up in the national team’s training camp.

But when and how did such talented player realize that playing football in Nepal wasn’t enough to secure a good future?

“The earthquake in 2015 caused a lot of damage to our infrastructure including Dasharath stadium, which halted the league. Then I had to stay at home and that was the moment when I started to think about my future,” remembered Amir, who is in Nepal on vacation since the past two months.
“There was uncertainty around the league. I had no other job to do. And then I reached the conclusion that I must leave football for a better future,” added Amir who is a product of All Nepal Football Association (ANFA) Academy.

After making up his mind, Amir learned operating excavator in his hometown Hetauda, following suggestion from his friend who was in Qatar doing a similar job.

“He suggested me to learn operating excavator in order to get a job in Qatar, where he was doing similar kind of job and was making good money. I learned it for two months and flew to Qatar on his suggestion,” added Amir.

He believes that he made a good decision by leaving the football career and going to Qatar to operate heavy equipment.

“I am happy with that decision. If ANFA had organized the league regularly, then I would have regretted my decision because I love playing football more than doing any other thing,” Amir said: “But the league has been stalled since the time I left the country. So I don’t have any reason to regret. There isn’t enough football activity here, so I would have no job like many other footballers.”
Amir said his former teammate Shiva Shrestha and other domestic stars including Ganesh Khadka, Ram Kumar Bishwas, and Arjun Subba, who are also in Qatar, are happy.

“Although we all have a passion for football and would have loved to continue the career in Nepal, we are happy in Qatar because we are making money,” said Amir.
“In the absence of league and other top-level competitions, we would have depended on small tournaments organized outside of Kathmandu valley. It wouldn’t help us make enough money to survive.”

The tournament runs for three months (March to May) in league-cum-knockout format. Matches are held every Thursday and Friday.

Nepal had reached the semifinal of the tournament in the last edition (2016) when both Amir and Shiva played.

“This tournament is an opportunity for us to represent our nation in the foreign land. No matter where we are and under what circumstances, we always love to make our nation proud,” said Amir.
The Qatari stadiums are always packed with Nepali supporters during this tournament, said Amir. “They come to support us at the stadium, travelling 6-7 hours by bus. None of the other community teams have supporters like us,” he said.

Passion for football
Amir, former number seven of MMC, still has a strong wish to play in front of local Nepali supporters in the homeland. He is planning to extend his Nepal stay if ANFA organized A Division League this time. “I have heard that ANFA is organizing the league this year. If they do, I will extend my stay to take part in the competition,” said Amir who has represented Three Star, Armed Police Force (APF), and Machhindra FC besides MMC in the domestic league.

He hasn’t received any official offer but expects to get it when the current uncertainty around the league ends. ANFA has set the league date for November 30, but has hinted to postpone it due to upcoming federal and provincial elections.

“I haven’t received any official proposal but my friends have told me that some clubs have made enquiry about my availability,” said Amir.

He said that he knew about the limitation of the country’s economic situation, however, he was of the view that the government and ANFA had not done enough to utilize the available resources for the development of football.

“It’s true that our country is economically poor and doesn’t have enough resources. But there is no plan and vision to uplift the country’s football utilizing the available resources,” Amir expressed his frustration.

“We can learn from India as they are seriously working for the development of football. Of course they are richer than us, but we can also at least increase our football activities so that players don’t need to leave the country,” said Amir.

The footballer suggested that young players should continue their studies along with the sport. “In the Nepali context, education is a must. You don’t know when you have to quit the sport due to lack of professional set-up in the country. So education is very important to keep the options open and ensure a better future for them,” said Amir.

Three Star to return in football