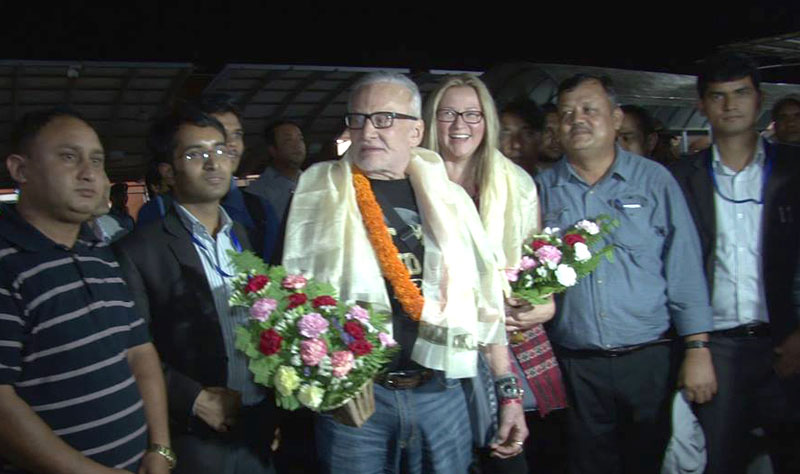 KATHMANDU, Sept 5: Buzz Aldrin, American engineer and former astronaut, who is the second among 12 persons to have stepped on the Moon , spent a whole day in Lumbini, the birthplace of Gautam Buddha, along with his team members. He had arrived in Nepal on Sunday with a six-member team.

According to Executive Chairman of Everest Science Center Nepal (ESCN), Dilip Adhikari, a Nepali scientist who is accompanying them, Dr Aldrin and his team returned to Kathmandu on Monday evening by a Buddha Air flight.

Aldrin will reach Biratnagar on Tuesday morning to take part in a program organized by ESCN. He is scheduled to present his former astronaut experiences for two hours to representatives of ESCN on the premises of ESCN, Sunsari. On Tuesday, Dr Buzz Aldrin and Dr Andrew Aldrin will give a presentation at Everest Science Center in Nepal, according to his official website buzzaldrin.com.

The duo will also give a presentation at the Academy Hall, Kathmandu on Thursday, according to the website.

Born on January 20, 1930, Aldrin is an American mechanical engineer. He was an American Air Force retired pilot before becoming the pilot of the Apollo-11 Lunar Module.

On July 20, 1969, Buzz and Neil Armstrong made their historic Apollo 11 moonwalk, becoming the first two humans to set foot on another world. An estimated 600 million people, the world’s largest television audience in history at that time, witnessed this unprecedented heroic endeavor. It was the first space journey in the history, which showed that it was possible for humans to land on the Moon. While Neil Armstrong, the mission commander, was the first person to land on the Moon, his footsteps were followed by that of Buzz’s feet.

While Armstrong and Aldrin landed on the surface, Collins revolved around the axis of the Moon. Aldrin was the pilot of the rocket, Eagle, which stayed for 21 hours and 31 minutes on the surface of the Moon. While Armstrong roamed on the Moon’s surface for about six hours, Aldrin was on standby at the rocket. They later exchanged their positions and jointly collected 21 kilograms and five grams of Moon dust, powder, and rocks to bring back to the Earth. The same rocks were presented at the ESCN, four years ago.