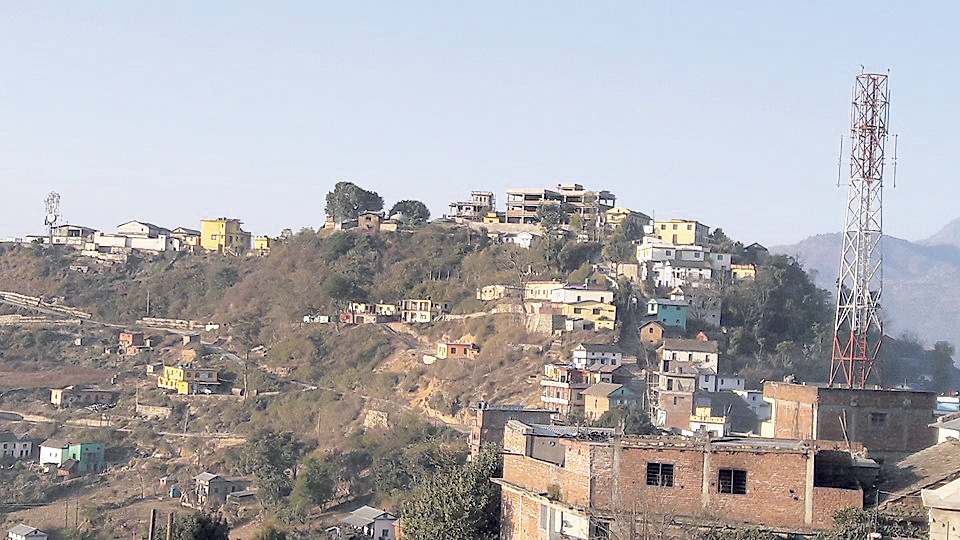 The possible site in Khalanga of Salyan district, where the Ministry for Culture, Tourism, and Civil Aviation had directed concerned bodies to build airport.

RUKUM, September 4: A plan for airport construction in Salyan was approved by the council of District Development Committee five years ago.

A year later, the Ministry of Culture, Tourism and Civil Aviation also planned construction of airport in the district headquarters Khalanga and directed the concerned bodies to hold a feasibility survey accordingly. However, due to negligence by the subsequent governments, the plan has been left high and dry.

Prakash Jwala, lawmaker elected from area number 2 of the district said: “The government has changed many times since the plan first came, but none of them showed any interest toward it. The airport plan has been left only to paper.”

Former vice president of Nepal Student Union, Rishikesh Jung Shah said: “The plan has been proposed based on local requirement, but the government has turned blind eye to it.”

He said the concerned bodies have not understood its importance. “The locals are compelled to go to Nepalgunj to fly, because we don’t have an airport,” he added: “Patients are losing their lives due to the lack of air connection.”

“It takes five to six hours to reach Nepalgunj from the headquarters by bus,” Yubaraj Regmi, a local said. “Many patients die while travelling this long distance. The construction of airport can end this problem.”

The Minister for General Administration, Tek Bahadur Basnet, said that the situation could be eased for Salyan if Dang airport, which is nearby, could be operated.

“We were happy to hear that an airport would be constructed in the district,” Anil Bhandari, a local, said: “But the happiness has faded out now.”

“The roads here are narrow and risky. The government should seriously consider constructing airport here,” Shah told Republica: “Neighboring districts like Dang and Rukum have airports. It’s unfortunate that Salyan does not have one.”

Locals claim that lack of coordination between local bodies and political leaders is the reason behind the delay in the airport project. Political leaders also concede to the fact.

Treatment of the sick and postpartum women is a major problem because of the transportation issue. “Health service facility in Salyan is not good,” Shah told Republica: “People have to go to places like Nepalgunj and Kathmandu for treatment, but travel is so troublesome.”

In the past, locals had once started construction of airport on their own in Rani Pokhari of Kotmaula in the district. But they could not carry it further in lack of government support.

JANAKPUR, June 5: A year ago, Janakpur was declared temporary capital of Province 2 amid protest against the decision. Residents of... Read More...

BIRATNAGAR, July 20: The project to generate energy from waste matter at Biratnagar Sub-Metropolitan City (BSMC) has been left in... Read More...