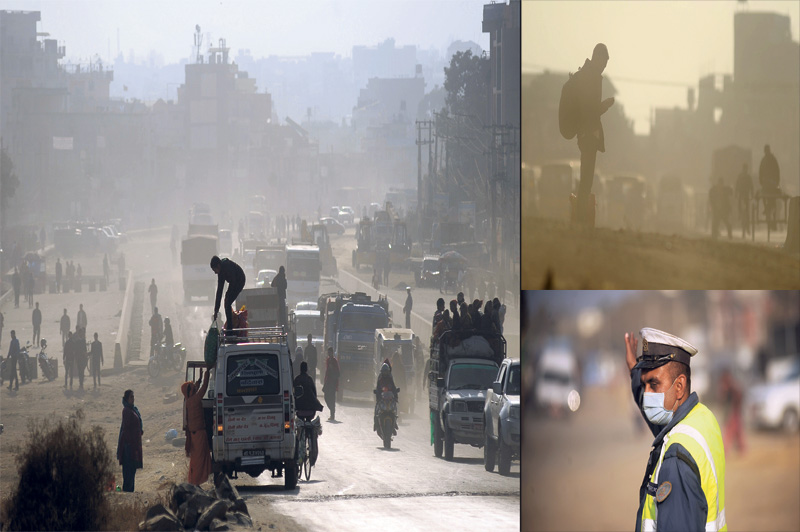 Life goes on in kathmandu Valley as dust rains in the street in this picture taken on Wednesday. Photo: Bijay Rai/Republica

Locals residing along the Koteshwor-Kalanki road section  have been the mostly badly affected by dust from the road work . The 10-km road section has remained under construction activity since June 2013. Division Road Office Lalitpur expects the work to be completed by 2018, a year later than the projected deadline.

"When will we get any respite from the extreme dust pollution here?" asked Bimochan Shrestha, an irate local of Matathirtha who has to  use the heavily polluted Koteshwor-Kalanki section frequently. "Locals like me will always cough and feel clogging in the nose. I'm worried that the health impact will be severe in the long run, and  we remain helpless."

A WHO report, 'Ambient air pollution: A global assessment of exposure and burden of disease',  states that as many as 36 people out of every 100,000 die in Nepal due to various diseases linked to air pollution

Maladies such as stroke, ischemic heart disease, chronic obstructive pulmonary disease, lung cancer and acute respiratory disease are linked to ambient air pollution. These alone are responsible for the annual death of over 9,000 people in Nepal, according to the WHO report.

Assessing the current increase in the incidence of respiratory disease, doctors have warned that the Valley would very soon turn into a hub for an array of health hazards if the current level of air pollution goes unchecked.

Along with harmful dust and vehicle emossion, the level of air pollution is also determined by the presence of microscopic soot particles known as PM2.5 and PM10. PM10 includes dust stirred up by vehicles and the wind as well as soot from open fires burning  fossil fuels. Experts said inhaling these toxins leads to inflammatory reaction by the human body followed by serious health hazards.

"These tiny particulates can easily be inhaled and they lodge deep in the lungs and get into the blood supply," informed Dr. Sudip Shrestha, a cancer specialist at Nepal Cancer Hospital, Harishiddhi. According to him, a majority of cancer victims suffer from lung cancer, and air pollution is the third biggest cause of lung cancer in the country.

PM2.5 particles are known to be carcinogenic. A report, 'Characteristics and sources of PAHs in atmospheric aerosols in Kathmandu Valley', published in 2015 by ELSEVIER journal, has also stated that the air in Kathmandu Valley contains extremely high concentrations of pollutants that can cause cancer.

Dr Karki recommended to the government to form a separate regulatory body responsible for formulating environmental policies, implementing them and monitoring the implementation. However, the Valley populatiuon of about six million remains helpless while waiting for the government to do something, he said

"At an individual level, all we can do is wear masks. But cloth masks commonly found in the market are useless against pollution. N95 masks, which have a special filter, are highly recommended," he added.

KATHMANDU, Jan 15: The Supreme Court on Sunday issued a mandamus in the name of government authorities to carry out... Read More...

SOLKHUMBU, Feb 9: Despite attempts to get rid of garbage dumped at Mount Everest, the ever growing open defecation in the... Read More...