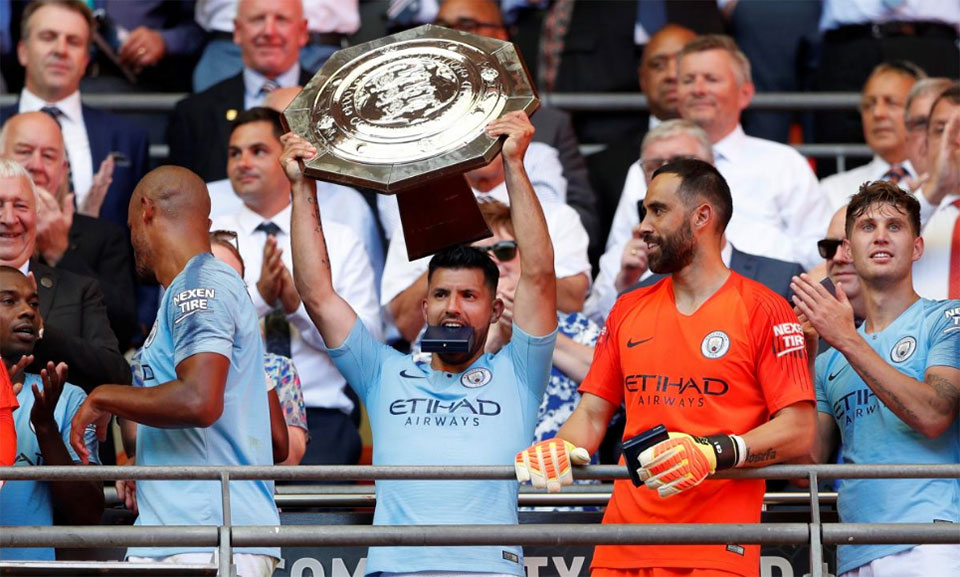 LONDON, Aug 6: The English season got off to a familiar start as Manchester City’s Sergio Aguero struck twice, including his 200th goal for the club, as they beat Chelsea 2-0 to claim the Community Shield for the fifth time at a sun-baked Wembley on Sunday.

The game between the Premier League champions and FA Cup winners is the traditional season curtain-raiser but on this evidence the gap between the two teams, which last season was 30 points, is as wide as ever despite the arrival of Maurizio Sarri as Chelsea manager and the signing of midfielder Jorginho.

Where City were quick and incisive, Chelsea looked disjointed, with the Brazilian-born former Napoli midfielder a bag of nerves in front of a new four-man defence.

Aguero struck his first after 13 minutes when Phil Foden, filling in admirably for Kevin De Bruyne, burst forward to find the Argentine, who wrong-footed defender Antonio Rudiger with a low shot to become the first City player to reach 200 goals.

Man of the match Aguero added a second from a Bernardo Silva pass after the interval but missed three clear chances, twice shooting wide and then foiled by a fine Willy Caballero save.

“Sergio was so sharp, so good,” said City’s Pep Guardiola. “Last season he had an operation on his knee. Now he feels free. He scored two goals, could have scored five, made chances,”

The Spaniard was delighted with his team’s performance in baking conditions that sapped the energy from tired legs but still ensured they became the first Premier League champions to win the trophy since Manchester United in 2013.

Ominously for City’s rivals, Guardiola said he had yet to work properly with his players, and spent the week concentrating on tactics rather than hard physical preparation.

FODEN SHINES
With Kevin De Bruyne among several first-teamers rested after his World Cup exploits for third-place Belgium, the manager gave a start to young England prospect Foden, who responded with a performance well beyond his 18 years.

Although the midfielder featured in City’s final game of last season, it was only to ensure he had played sufficient matches to claim a title medal.

But on Sunday he looked a proper first teamer, several times bursting forward from the halfway line to link well with the equally impressive Bernardo Silva and Aguero.

With new signing Riyad Mahrez also making his competitive debut, the signs suggest City have moved on from last term as Guardiola seeks to become the first manager since United’s Alex Ferguson in 2009 to mastermind successive Premier League titles.

Chelsea were second best in almost every aspect of play and took 25 minutes to register a shot. But with Eden Hazard and N’Golo Kante among those to return after the World Cup, it is too soon to make a judgement after more managerial turmoil.

Sarri, who replaced sacked compatriot Antonio Conte in July, did their best to respond to his high-pressing game but the conditions took their toll and by the end they looked ragged and off the pace.

The one bright spark was 17-year-old winger Callum Hudson-Odoi who delivered another fine pre-season performance, unsettling City with his pace as he sought to provide striker Alvaro Morata with the right sort of service.

The heat that beat down on the players all afternoon at the national stadium in London will now settle on 63-year-old Sarri as he looks to spark an immediate improvement in their Premier League opener at Huddersfield Town next week.