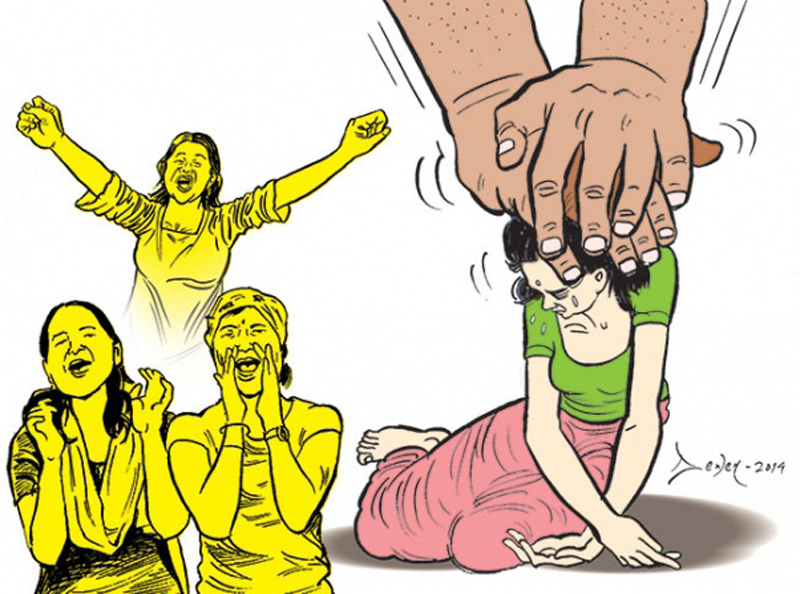 Knowing of the sacrifices women rights defenders make every day, let us commit to respect them
On November 29th, 2006, Women Human Rights Defenders (WHRDs) from around the globe gathered in Colombo, Sri Lanka and declared this day as theirs. November 29th therefore became the International Day of Women Human Rights Defenders, and was celebrated this year all over the world in recognition of the courageous work that they do to defend their own and other women’s rights.

Historically, women have played key roles in all social and political movements around the globe. Women’s struggles for freedom and equality have been an intertwined and vibrant part of movements which have called for social transformation and social justice.

Women’s leadership and involvement in Nepal during people’s popular movements which overthrew the Rana rule (in 1951), established democracy (in 1990) and re-established a democratic republic (in 2005-6) have been crucial in the fight for a more inclusive society. Women’s participation in these struggles has been evident to every Nepali citizen.

However, after the successes of these movements women again return to the marginalized, second-class status that they held before each movement.

The non-recognition of women’s participation, bravery and leadership has affected society in general and women’s rights in particular. Tokenisms of women’s participation in decision making have been perceived to give equality to women and recognize their vast contributions. However these are perfunctory and allow dominant patriarchal attitudes to continue unchecked. These sexist attitudes and structures have restricted societal transformation. Despite political movements that have promised transformation, Nepali society has been unable to see or feel improvements, with many groups still excluded from holding equal rights. Women have not been able to receive justice or feel that right has been done by them. Violence against Women remains far from being controlled.

While Nepali women fought successfully at public level, they are still fighting at a personal level. Patriarchal structures permeate all levels of society and infect all aspects of men’s, women’s and children’s lives. Patriarchy is a social construct that gives privilege to male power, and separates the public and private worlds. It constructs ‘gender’ (a socially constructed term, assigned to different sexes) as a binary of male and female and assigns particular roles and privileges accordingly. Women are forced into roles—over time these roles have become synonymous with ‘female’ and tightly defined what a woman may or may not do—within the private sphere. This creates and perpetrates inequality.

Over many years, this situation has forced women to face different forms of violence, marginalization and stigmatization. When women challenge the social values and norms assigned to them, they are perceived as irritating agents disturbing social harmony.

Increasingly, we see strong women who challenge patriarchy being blamed with destroying family values and publicly shamed as nasty. This makes women who speak out against discrimination and patriarchy vulnerable to abuse and violence.

Hina Jilani, as the UN Special Representative of the Secretary-General on the situation of Human Rights Defenders, has said, ‘’I (have) consistently reiterated that women defenders are more at risk of certain forms of violence and restrictions, and become more vulnerable to prejudices, exclusion and public repudiation by state forces and social actors, especially when engaged in the defense of women’s rights. This is particularly true when they are perceived to defy cultural norms and social constructs on gender, sexuality and femininity, or when they challenge social structures vested in economic interest or traditional practices.’’

Situation in Nepal
The President of Nepal, Bidhya Devi Bhandari, was abused for entering Janaki Mandir temple due to her status as a widow, which is a clear example of how our patriarchal structure is not only unprepared to accept women’s leadership, but will also be abusive against women who take such positions and who reject socially constructed roles of submission. Similarly the writings of intellectuals regarding Madhavi, a female character in a theatre drama; the degrading words used to describe intimate body parts of a female leader; and current discussions about mentally challenged women can be taken as examples of  existing mindsets, which may create vulnerability and insecurity in women.

Yes, some women in power make mistakes. I recognize that allowing bodyguards to enter temples with their shoes and taking public money for private treatment is not acceptable. The latter can be taken as a crime against those citizens who are forced to die in the lack of medicines and money for treatment. However I am offended by the words that have been used against them, to publically tarnish their reputation, as women.

Intellectuals influence public opinions. It is therefore necessary for them to consider their choices of words carefully. When a powerful woman is verbally abused, it sends a signal that it is acceptable to abuse women.

On rights defenders
A plethora of evidences exists that illustrate how women who are active in communities and demanding rights for themselves, for other women and marginalized persons, are being silenced. Women are verbally abused, beaten and threatened simply for advocating for the rights of women. Ruby Khan of Nepalgunj, Sharada Chanda of Kanchanpur, Dev Kumari Mahara of Siraha, Radhika Sapkota and her team from Dhading are recent examples of those who have been attacked for daring to speak out against atrocious acts of violence committed upon women.

So without changing mindsets, without creating female role models and without valuing and recognizing women’s work as work and women as equal citizens, it will be impossible to create environment for women to live with dignity, free from all forms of violence.

In 1992, the Convention on the Elimination of Discrimination against Women (CEDAW) Committee elaborated on the definition of Violence against Women, issued in General Recommendation Number 19:

In countries like Nepal, the state cannot fulfill all its obligations across the five areas without support from women human rights defenders active at community levels. It is important to understand that the women defenders themselves face a multitude of abuses within their own families and societies because of who they are and what they do. They face violence and injustices alone, without any state support. The state also does recognize the life-saving work of women defenders. In the struggle to eliminate Violence against Women, the central role of the WHRDs in this struggle needs to be recognized and respected by those in power. This can be done only by challenging discriminatory, unequal structures of power that are engrained from personal to all the way to political levels.

For the state, the Sustainable Development Goals (SDGs) framework sets a standard to provide greater rights for women. However the difference may not be made by the state alone. Civil society must recognize the active role it has to play. Civil society must take the lead to recognize women as equal citizens, and work to eradicate abuse—whether it is mental, verbal, written or physical—to send a message that abuse will not be tolerated, and perpetrators will be punished. As stated in the SDGs, there will be no sustainable change without the effort and recognition of women.

Understanding the sacrifices that are made daily by women rights defenders, let us commit ourselves to respecting them: by recognizing their important work, by creating a supportive environment for them to continue upholding rights, and by allowing them to create an inclusive definition of justice that encompasses all perspectives and allows justice to be felt by all women, at all levels.

Is there a way to better support the civil servants who have what it takes to become social entrepreneurs? ... Read More...