After a long wait, nomadic Rautes finally getting citizenship 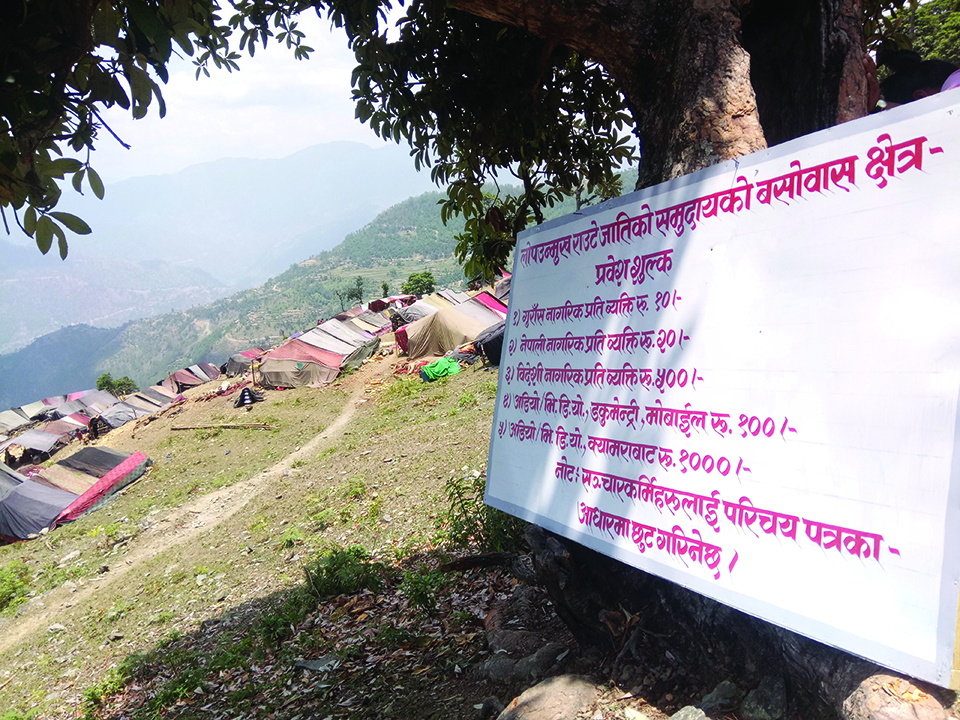 SURKHET, June 18: Members of the endangered Raute tribe, who have long been demanding citizenship certificates, will be finally getting one. The Social Development Ministry of Karnali Province has decided to provide them citizenship based on the identity cards distributed to them last year by the Guras Rural Municipality.

"We already have personal details of the Rautes. Last year they were provided with identity cards. After consultation with stakeholders, we have decided to provide citizenship cards to them," said Dr Man Bahadur BK, secretary of the Ministry. "The Rautes are happy with the decision and we expect that the citizenship card will help them to claim social security allowances and other facilities provided by the state," he added.

Though they have been demanding citizenship for a long time, authorities were unable to provide. Because of their nomadic lifestyle, they didn't have a permanent address to cite, which is mandatory to claim citizenship.

In the lack of citizenship, Raute were being deprived of several state facilities. As they had to produce citizenship card in government hospitals and other public offices, they had been deprived of services that they were entitled to as citizens. Though they have been demanding citizenship for a long time, authorities were unable to provide. Because of their nomadic lifestyle, they didn't have a permanent address to cite, which is mandatory to claim citizenship.

"Now what we are going to do is cite the address on their identity cards and issue citizenship cards to them. The process has already started," said CDO of Dailekh, Laxmi Bastola. "It will make it easier for them to claim social, health, and other state facilities.

Earlier Raute themselves were not much eager to adapt to the modern lifestyle. They would hesitate to send kids to school or let them learn skills. However, over the years, with shrinking of jungles and their habitat too coming under threat, Raute were left in a dilemma.

"Raute did not like to learn anything from other people earlier. They thought their culture would be destroyed if they start adapting to others' practices," said Khemraj Wali, the chairperson of Guras Rural Municipality. "But they were suffering, they had no food, shelter, they were in trouble," he added.

Rautes, who mostly live in the forest of western hills, have their own cultures and traditions. They believe in shamans and worship nature. Dance, music, and merrymaking is part of their regular life, although management of food and shelter always remains a challenge.

"They used to be fully dependent on jungle food. But over the years, it became quite difficult for them to find sufficient food for their families. They began to shift from inner parts of the jungle towards roads. Their lives started to change," said Wali. "Due to the changing reality, they are also gradually changing and with that their needs now include what members of other communities seek," he added.

However, protecting their originality while providing them state facilities is something that the state must think of, Wali suggests. "They are very few in numbers. Let's say over 100. They are the last living nomad community in Nepal, we have to conserve this tribe and its unique way of life," he stated.

According to the CDO Bastola, a team will be dispatched to Raute settlement in the jungle with the cards. "They will get it very soon. We are going to deliver their citizenship cards to their doors," he said.

As per the study of Samajik Sewa Kendra, which has been working for the welfare of the Raute community, their population is 146. Of them, 25 are above 60 years and 63 are children. The rural municipality had named Garchakhola as the permanent address of those Raute in the identity cards it issued last year.

For the protection and conservation of the community, Guras Rural Municipality is taking measures. One cannot enter Raute settlement now without paying an entry fee. "Because it is important to protect their tradition, culture, and lifestyle, we started barring unnecessary people from entering their settlement, "said Wali. "If a fee is charged, not everyone is willing to visit them," he added.

Since the rule was implemented, the number of people visiting the Raute has declined, Wali said. Locals have to pay a fee of Rs 10, non-local Nepalis have to pay Rs 20 and foreigners have to pay Rs 500 to enter their settlement. Those who want to take audio or videos of the community have to pay an additional Rs 1000 fee.

"This has stemmed the flow of visitors. We have also fenced the area," Wali informed. The rural municipality has deployed two staffs to collect the fees.

Citizenship has become one of the most debated issues of Nepali politics for nearly over five decades. ... Read More...

House committee for citizenship through mother and no father's status

KATHMANDU, March 6: Lawmakers at a meeting of the State Affairs Committee of parliament have agreed to include a provision in... Read More...

COP-27: Achievement for Nepal
50 minutes ago