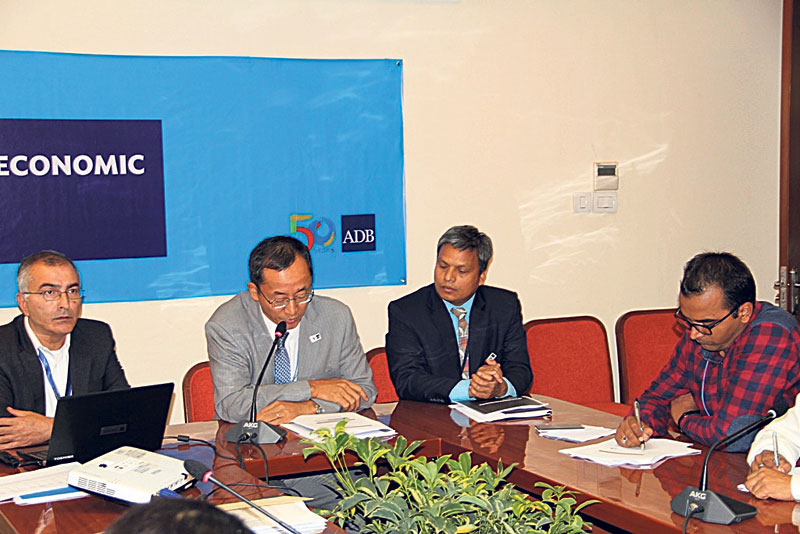 The inflation, according to the ADB, will remain at 8.5 percent due to better agricultural harvest on the back of normal monsoon, subdued inflation in India, low international fuel and commodity prices, and normalization of production and supplies since February 2016, which will likely lower general prices of goods and services in the current fiscal year despite the demand-side pressures emanating from the earthquake-related fiscal stimulus.

Releasing the Macroeconomic Outlook for 2016/17 on Friday, the multilateral development partner said that the ongoing developments and a cautiously optimistic outlook on reconstruction and political situation is expected to push the GDP growth to 4.8 percent.

The ADB forecast is, however, lower than the government's target of 6.5 percent announced in the budget for the current fiscal years. ADB has tried to accommodate the downside risks while calculating the economic forecast.

A downside risk to the forecast is the more than expected damage caused by natural disasters, especially flooding and landslides, to agricultural output; slow rehabilitation and reconstruction works; slow pace of budget execution; and depressed demand in services sector arising from the deceleration of remittance inflows. But the better monsoon and expected pace of reconstruction works -- in the current fiscal year -- has helped create moderately optimistic scenario, the report reads.

“However, it hinges on the scale of recovery of agricultural output given the normal monsoon, the scope and pace of post-earthquake reconstruction and rehabilitation, budget execution, and remittance inflows,” Principal Economist at the ADB, Sharad Bhandari, said, adding that the monsoon rains were above normal and on time unlike in the past few years.

Approximately, 80 percent of total rainfall occurs between June and September. The Ministry of Agricultural Development has estimated that paddy transplantation has been higher compared to previous years. Paddy transplantation averaged about 95 percent of 1.4 million hectares of rice field by the first week of August, much higher than 75 percent in Fiscal Year 2014/15.

However, widespread flooding in the Tarai region and the mid-hills, and landslides caused some damage to crops during the last week of July and the first week of August, he added. "The outlook for industrial and services output is contingent upon the evolving political situation, reconstruction work, pace of budget execution, recovery of tourism sector and remittance inflows," said Bhandari.

The scope and pace of reconstruction projects will affect demand for quarrying, manufacturing and construction activities, which largely dictates the trajectory of industrial output.

Timely, effective and judicious budget execution, which includes both accelerated spending and reform measures, will be at the core of industrial and services sector recovery. Similarly, a slowdown in the growth of overseas migrants is bound to affect remittance inflows, which subsequently would affect the major components in the services sector, he said, adding that increasing the quantum and quality capital spending is crucial to building the necessary infrastructure to graduate from Least Development Country (LDC) status to a developing status by 2022, and the long-term goal of becoming a middle income country by 2030.

PPA implementation still challenging
Though amended Public Procurement Act (2016) has some desirable features, there remains a gamut of challenges in the procurement process that has delayed the development projects, the Asian Development Bank said on Friday.

Likewise, the increase in threshold to Rs 20 million from Rs 6 million for works contracts/tender without requiring bidders' qualification may foster malpractice in the construction industry, it reads identifying the challenges. "Thresholds applied to international bidders may violate World Trade Organization (WTO) rules as well as procedures of multilateral development banks," the report added.

The multilateral donor, however, has praised the amendment for placing clearer authority on chief of the procuring entity for timely and quality procurement and execution of contract; for explicitly recognizing e-bidding now and six additional direct procurement methods added, greater delegation of authority to facilitate decisions on cost variations, PPMO's regulatory functions strengthened, greater clarity on different procurement processes for methods such as design and build, turnkey/EPC, public-private partnerships, among others.

KATHMANDU, April 12: Asian Development Bank (ADB) has said that Nepal's economy is anticipated to grow by 4.9 percent in the... Read More...