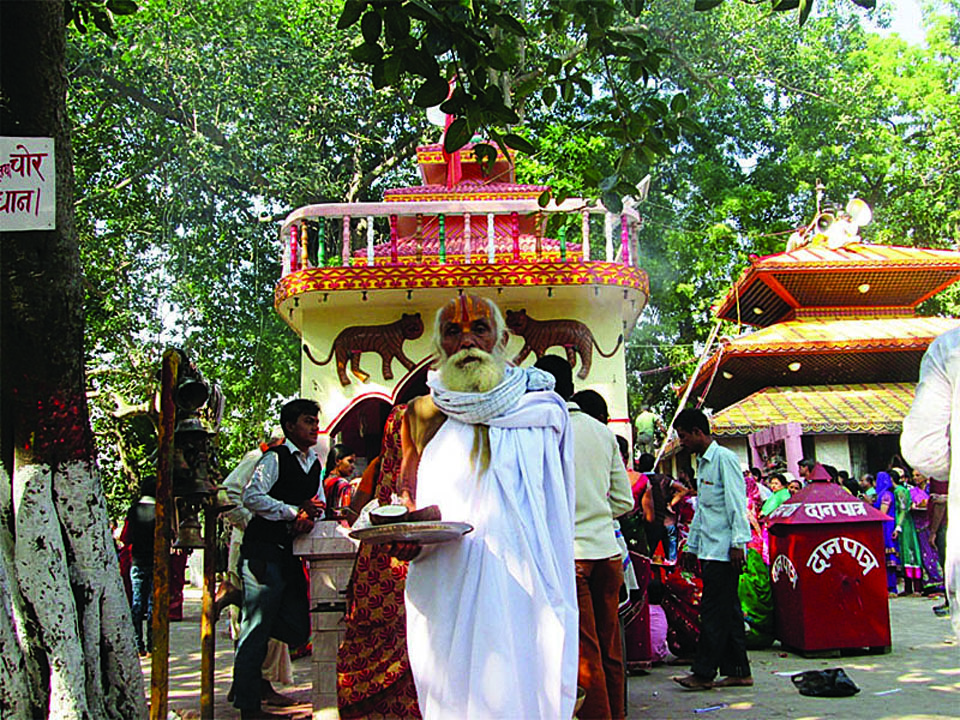 KATHMANDU, Nov 24: Scores of buffaloes, some as young as four months, are being brought to Gadhimai temple for sacrificial offering despite a relentless campaign by various animal rights groups to stop the mass slaughter during the month-long religious festival that began  November 17.

The Gadhimai festival, celebrated once every five years, has become known around the world for the mass sacrificial offering of animals including buffaloes, goats and chicken.

As of Saturday evening, some 300 buffaloes, some just four months old, have been brought from across the Indian border mainly but also from various parts of Nepal for the sacrifices that start in Bariyapur on December 3, a Republica reporter found during a field visit.

“The numbers could gradually increase as the sacrificial hours get closer,” said Motilal Kushwaha, general secretary of the Gadhimai Mela Organizing Committee (GMMOC).

The animals are commonly offered in sacrifice by people to render homage to Goddess Kali for fulfilling their wishes, such as the wish to become a  parent or recovery from illness.

Authorities in Nepal and India have taken several restrictive measures to curb the mass slaughter in recent years. In 2014, India announced a ban on the export of animals for mass offering. This led to a decline in the number of buffaloes sacrificed to only 5,000  as compared to 20,000  in 2009.

GMMOC office holders said they are expecting a further decline in the numbers sacrificed, due to a mass awareness campaign. But it could take years, even decades, for the practice to end entirely.

Kushwaha said that they were also taking various steps to discourage animal sacrifice as per a directive of the provincial government.

“For the first time, we are requesting people to make donations to the temple instead of sacrificing animals. We are also working with animal rights groups to promote awareness,” he added.

Since last week, several animal rights groups have been holding mass awareness rallies, urging people on both sides of the open border to refrain from killing the innocent animals. On Friday, animal rights activists, civil society members and government officials including the CDO, and the chiefs of the Nepal Police and Armed Police Force held a mass rally in Bara district calling on the devotees not to kill.

“We are asking people to offer the deity sweets or papaya fruit instead,” said Kalawati Paswan, a former assistant minister who is leading the campaign against the slaughter. On Thursday, a group of activists including Paswan met with Indian officials including border security personnel to staunch the inflow of sacrificial animals.

“I personally counted 99 buffaloes that have already been brought for sacrifice. There could be many more out there. Most of them are really young. This madness should stop,” Paswan said.

GMMOC  expects more than two million people to visit the temple during the festival.   More than 200 water taps, 600 toilets and hundreds of light bulbs have been installed across the temple premises and the sacrificial site.

Kushwaha said the festival is likely to cost around Rs 40 million.

“We are struggling to arrange the costs due to lack of financial assistance from the provincial or central government,” he said.

KASKI, May 17: The CPN-UML candidates for both posts of chairperson and vice-chairperson have won the elections in Annapurna Rural... Read More...

KATHMANDU, May 16: Former King Gyanendra Bir Bikram Shah has expressed his best wishes to all on the occasion of... Read More...