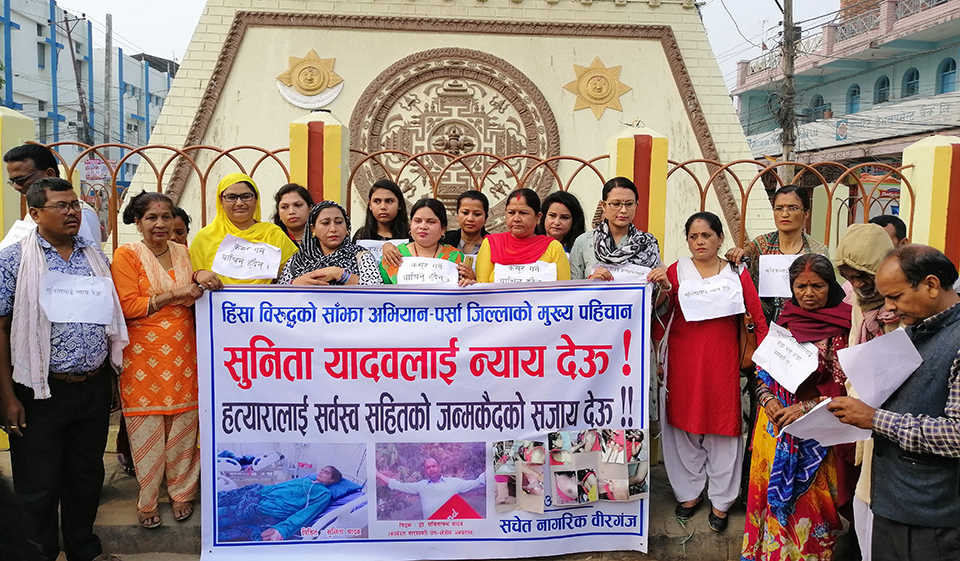 BIRGUNJ, March 31: Rights activists on Saturday took out a march from Ghantaghar of Birgunj to protest the killing of Sunita Yadav who succumbed to injuries on Friday after being brutally beaten by her doctor husband.

At the end of the march, social rights activists and women activists gathered at a place and demanded stern action against Dr Sachitananda Yadav, Sunita's husband, and other members of the Yadav family involved. They carried banners stating that the culprit must be sentenced life imprisonment.

Sunita, 45, of Herpatgunj in Birgunj-20, died on Friday while undergoing treatment at the Kathmandu-based Tribhuvan University Teaching Hospital. She was the first wife of Dr Yadav, a doctor specialist in treating diabetes and thyroid diseases at Narayani Hospital of Parsa. Reportedly, Sunita had been tolerating the torture and physical violence of her husband for more than a decade.

Nagendra Yadav, Sunita's maternal uncle, informed Republica that Sunita's family had offered dowry and an additional Rs 1.9 million when the couple got married on February 21, 2003. However, her husband started pressurizing her for more dowry after two years of the marriage.

Even after 14 years of marriage, Sunita could not obtain her citizenship certificate from her husband's name.

India to resume export of Covishield vaccines from next month, neighboring countries to get first priority
5 hours ago