KATHMANDU, May 22: A cabinet meeting held at midnight decided to dissolve the lower House and recommend new dates for mid-term elections. At 12:50, Prime Minister KP Sharma Oli sent a letter to President Bidya Devi Bhandari. President Bhandari, at 1:49 in the morning, dissolved parliament and announced elections for November 12 and 19. A press statement from the Office of the President stated that the House was dissolved and the dates for midterm elections were announced as per     the Article 76(7) of the constitution, as recommended by Prime Minister Oli. The whole process took exactly 59 minutes. 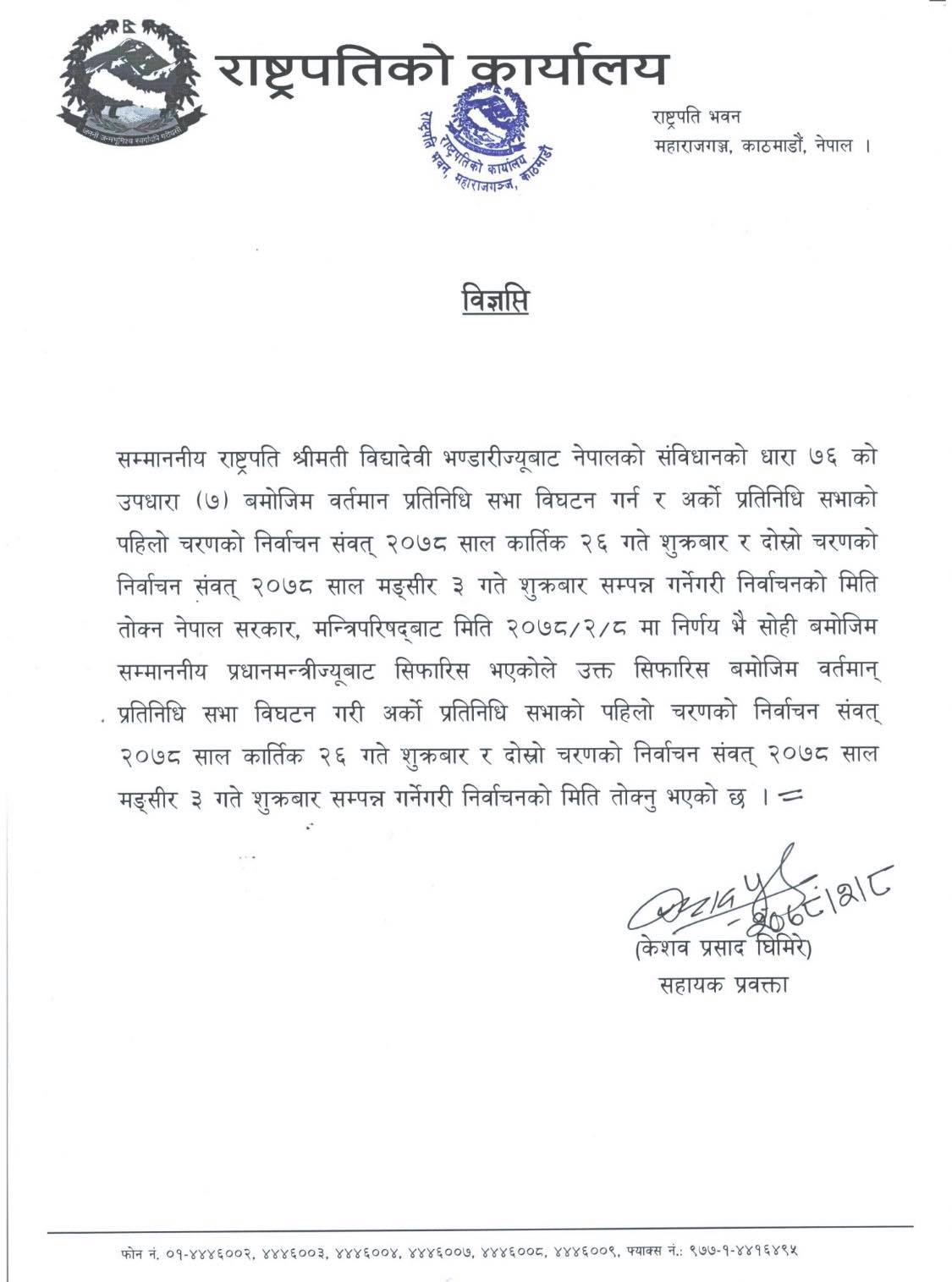 Before this late night development, the Office of the President issued a statement saying that both KP Sharma Oli and Sher Bahadur Deuba did not have grounds to claim support of the majority of lawmakers to form a new government as per the Article 76(5) of the constitution.

Soon after the dates for midterm elections were announced, major political parties slammed PM Oli and President Bhandari for their unconstitutional moves. Bishwa Prakash Sharma, Nepali Congress spokesperson, said, “People are fighting pandemic, and this is the gift to the people? This is a different type of Kotparba, and the PM is riding on his imaginary highway of dictatorship. A collective raping of the constituion will prove costly.” 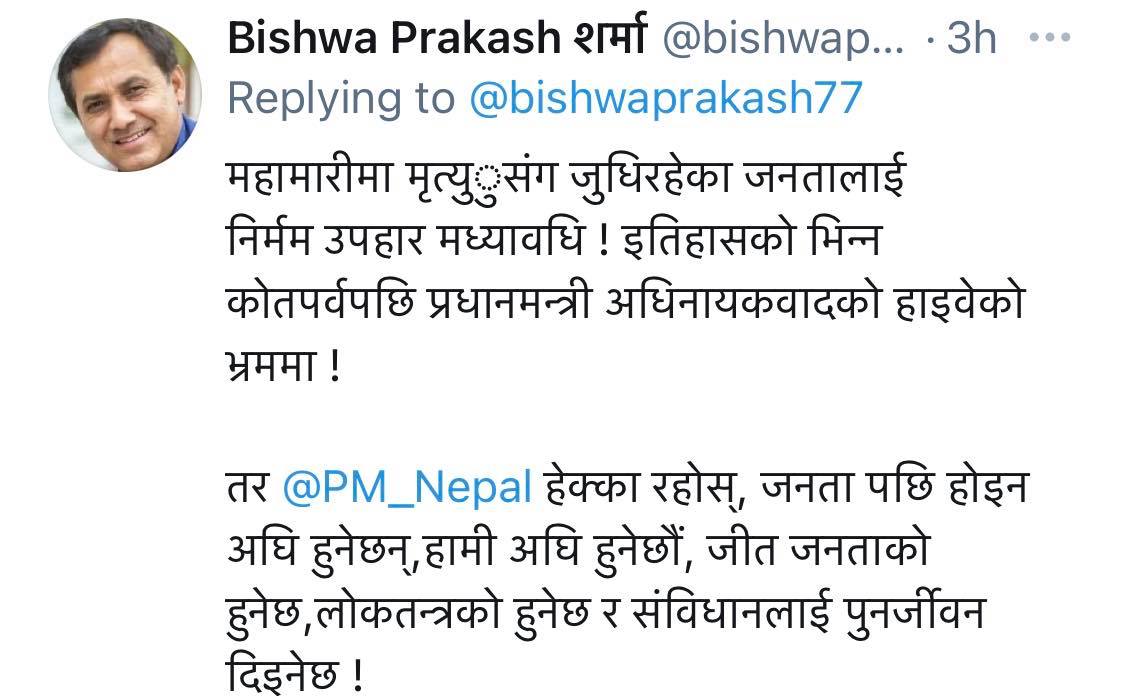 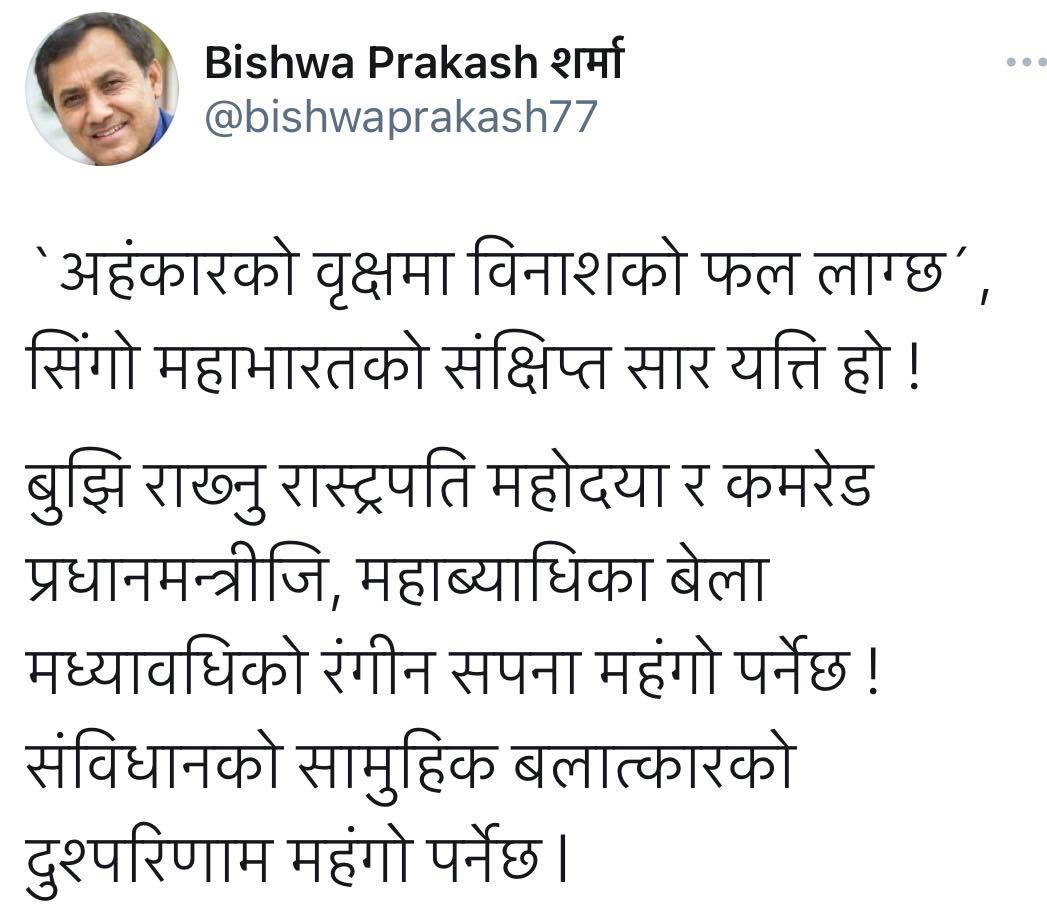 Similarly, Barsha Man Pun, Maoist Center leader, said, “This is a midnight robbery. Gyanendra Shah used to choose Fridays and midnights for similar moves. KP Oli is a stooge for those who did not like our constitution, and this is an attack on democracy and our constitution.”

Dr Shekhar Koirala, senior Nepali Congress leader, termed the late Friday night development as unconstitutional, and that the move has “pushed the country into a scary conflict. This move by the president cannot be pardoned.”

Ramesh Lekhak, another Nepali Congress leader, tweeted that ‘the president forgot her duty and trashed the constitution; she cannot protect and preserve democracy’.

Friday’s moves by PM KP Sharma Oli and President Bhandari will invite confrontation and political uncertainty. At a time when the coronavirus is raging across the country, the fresh rounds of political chaos is likely to manifest in rather ugly ways. Initial reactions on social media platforms have been swift and harsh. There is fear that the new political developments will push the country toward a prolonged crisis.

PM Oli’s move to dissolve parliament is against the constitution and democracy, say leaders and experts. ... Read More...

KATHMANDU, Sept 19: When the country prepares to celebrate today the fourth anniversary of the promulgation of Nepal's constitution drafted... Read More...