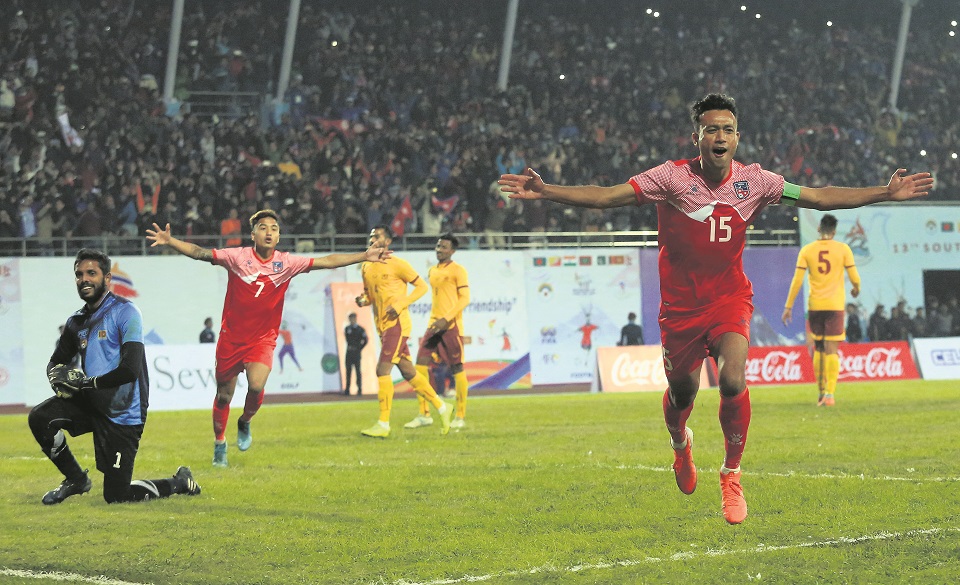 Nepal’s Sujal Shrestha (right) celebrates after scoring a goal during the men’s football match of the 13th South Asian Games against Sri Lanka at the Dasharath Stadium in Tripureshwar, Kathmandu on Wednesday. Photo: Dipesh Shrestha/ Republica

KATHMANDU, Dec 5: Nepali football fans were in a rupture after Sri Lanka scored an injury time equalizer to stun Nepal from clinching its second straight win in men’s football of the 13th South Asian Games (SAG) in Tripureshwar on Wednesday.

The fans, who were in a terrific mood when the game started, and even more jubilant when Nepal scored a first half penalty, were cursing and chanting ‘loser’ to the Sri Lankan players after they scored the equalizer.

With the game becoming tense after injuries and big stoppages at Dasharath Stadium, the Nepali supporters were on their knees when Sebamalainayakam Jude Supan scored a brilliant free-kick in the stoppage time to break Nepali hearts.

The Sri Lankan players did not hold back their frustrations either as they were reacting to the chant after they equalized, gesturing to the Nepali fans to chant more and pushing the Bhutanese referee at one point.

The players shared the same emotions as the fans, who were cursing and booing the Sri Lankan players after every tackle or interception. Captain Sujal Shrestha, who converted a 36th minute penalty to give Nepal a 1-0 lead, was in the thick of things with either pushing his opponents or either being pushed.

The temper was high in the Nepali players in the second half and they could not convert the chances into goals with Shrestha coming very close twice.

Shrestha, who scored a brace in a 4-0 thrashing of Bhutan, hit a shot from outside the box in the 22nd minute, but it was saved by the Sri Lankan keeper Sujan Perera.

It was Perera who gave the ball away cheaply to Shrestha in the 56th minute, but Nepali goalscorer’s shot from the edge of the box whiskered wide, much to the frustration of the Nepali faithful.

There were anger issues with the Nepali fans, who did not refrain from complaining about the way Sri Lanka celebrated after the goal was scored. One of them said: “1-1 isn’t a win. You did not defeat us. Who celebrates when you draw?”

It was not a win for Nepal either, and the fans started to shout angrily toward the Sri Lankan bench. The Sri Lankan players on the pitch were still gesturing to the fans to chant more and eventually went on to push the Bhutanese referee.

The game had plenty in store as well with Nepal completely dominating the possession, but with minimum intent. Forward Rejin Subba, who did not start against Bhutan, had several chances, but missed. He did not hold the ball well, and gave away the possession on several occasions.

However, Shrestha converted the spot-kick comfortably with his shot in the right side beating the goalkeeper with minimum pressure nine minutes from half time. The equalizer was even better as Supan got a pass from captain Mohamed Fazal, and the defender banged the ball into the right top corner. Goalkeeper Bikesh Kuthu had a fingertip on the ball, but the shot was too strong for him.

Nepal missed very good chances including one from Ananta Tamang as he could not turn a point blank range header after a corner from Abhishek Rijal.

KATHMANDU, Dec 4: Nepali team were held to 1-1 draw by Sri Lanka during the Men’s Football match held under... Read More...

KATHMANDU, Dec 3: Early goal by Sujal Shrestha has given Nepal a lead of 1-0 against Bhutan in Men's Football... Read More...