Aaradhana: A great inspiration for youth 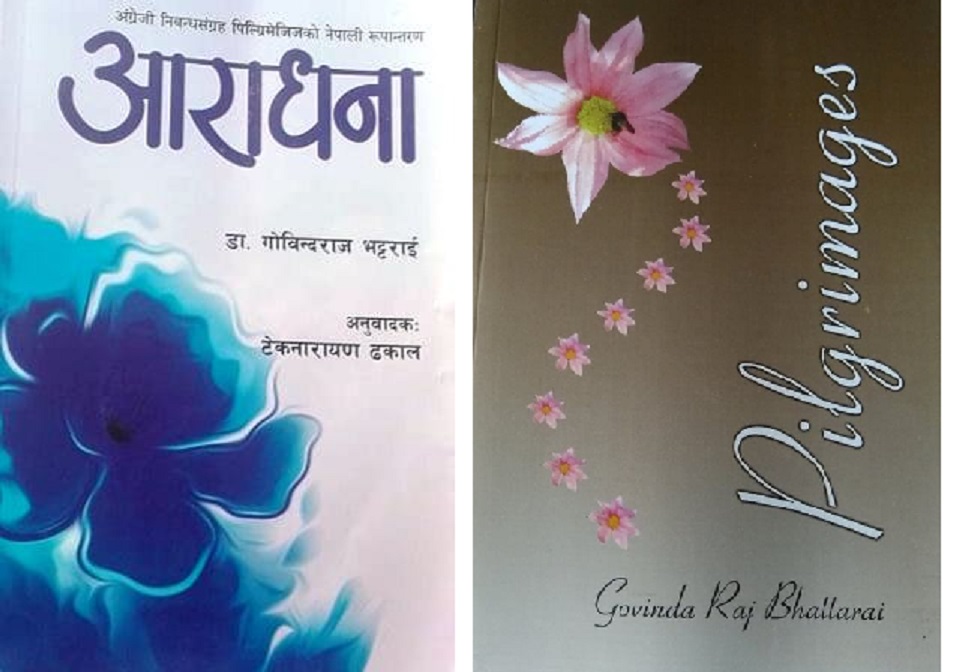 Wagle is an emerging writer
news@myrepublica.com

Dr Govinda Raj Bhattarai is a well-known figure in Nepali literature. He is an amazing literary critic. His hard work, dedication and strong will to contribute to Nepali literature is inspiring for everyone, especially emerging writers.  He has published many books and the contents of his books are very exhilarating, inspiring. The way he puts his opinions and thoughts into words are mesmerizing to the readers which has also been well-acknowledged within the Nepali literary circles. Among his many books, 'Pilgrimages' is basically the compilation of his English essays. It was re-published in a translated version which was named ‘Aaradhana’. A highly accomplished translator, Tek Narayan Dhakal has done a complete justice to the original work. The book was released on 14th December, 2019. Aaradhana consists of 12 essays and all of them are worth reading. Let me briefly touch upon the essays.

Indreni taangiyeko Aakash rahechha : MeroBalyakal is the first essay, where writer has shared his childhood days, academics, his desire to learn English language etc. In his school, his teachers from Darjeeling made an indelible mark in his young mind, that English was the superior language among all languages.  The writer was deeply influenced by the thought of his teacher and he worked hard to improve his English. As he grew up he had self-evaluation that he is going against the culture that his forefathers strictly followed. His obsession in English made him realize the fact that he was moving away from his familial culture. Having information of multiple languages is not bad but underrating and devaluating our own Nepali language under influence of any other language is not a good thing to do.

Nadekhiyeka Ek Swapnadarshi Ko Samjhana is the second essay in which the writer has discussed about the terror spread among publics due to cruel Panchayat System and BP Koirala who always fought for the citizen’s right.

HridayaKo Gaana Sangai Ramauchha Shrijanamul is his third essay. Writer mentions that he got no inspirations initially while writing. He used to write many things, read his creations on his own and make his heart listen to his creative pieces. This made the actual Dr. Govinda Bhattarai. According to his experience, children are pressurized by their parents and teachers to secure good grades only. This is still very much true for our generation as well. Through this essay he has conveyed that imagination is the pillar of creations.

In his fourth essay, SundarJivankala Sikne Hetu Le Pustak Padhau writer has discussed about the importance of reading books, what kind of books do we need to choose and has tried to inform the young generations about it. He has informed about the world wide popular books written by legendary authors and their contents. The writer has suggested going through books written by Nobel Peace Prize award winners and many such other personalities.

Purba Ko Scotland Ma RaatVar Jaagraam is his fifth essay. The writer has shared his experience of participating in a four- days Conference on Linguistic in Shillong. He observed natural beauties as well as things like destruction of natural environment during his trip from Guwahati to Shillong.  The green plants, forest and enchanting surroundings of Shillong made English rulers feel it like Scotland. Taking this as a reference the writer also selected 'Scotland' instead of Shillong.

The sixth essay entitled as, 'Ek Aditiya Sahitya MandirKo Yaatra' made me feel like I was also going to Leo Tolstoy's place. It is often said that the one who writes and are involved in literary field are not financially rich in Nepal but Tolstoy  was a both a great writer and a rich man!. He owns acres of land, apple garden where we can find more than 30 species of apple, many agricultural products which proves that he is absolutely accomplished person. Writer has fluently expressed each and every details about Tolstoy's building, his crematory area etc.

Shakespeare Janmabhumi KoYaatra Sansmaran is his seventh essay. Here, writer has very interestingly mentioned about the trip to birthplace of William Shakespeare, Warwickshire. His birthplace, grammar school where he read, trinity church, museums based on all over his life took me 500 years back.

His eighth essay entitled as, 'Gyan Prapti Vaneko Gagri ma Paani Bhare Jasto Navayera Samidhabata Agni Sthapana GareJasto ho' is complete meaningful sentence in itself which has given lots of information especially to the young generations. Here it is mentioned very clearly the fact that what our parents and motherland wants. Writer has expressed his sadness that we are not able to preserve and protect our culture, tradition and our national identity. Apart from these, he has guided the youngster by suggesting what we need to do to improve upon improper education management. He has suggested choosing one of the best sectors of arts as it makes people thoughtful and creative.

Yugantakari Aayam PariwartanKo Sanghar Ma Ubhida is 9th essay, where writer has discussed about post-modernism. Any belief or perception cannot be considered as "universal truth" because change is dynamic, things change according to the time. This is probably what post-modernism states according to my understanding. I found understanding post-modernism a bit complex. It is often said that there is nothing more than science but all those scientific beliefs also need to be tested and examine time and again.

Mero ShrijanaKo Udeshya is the 10th essay and here we can know how the writer feels when he does not get to write. Again, his passion towards reading and writing is reflected in this piece.  He has spent 4 decades of his life in creating works of art. According to him, once we start writing we cannot go away from it.  It gives writers immense pleasure.

Bilupta BaikunthalokKo Tirsana is 11th essay. The writer has shared fun experiences of his childhood days spent in his village. Writer has also expressed his disappointments as the capital city has completely made people apart from their village and natural surroundings. Thus, he feels his village is as magical as heaven as compared to urban areas. But these days, the village area has also become deserted and ruined. In the name of development, ecology is destructed and writer expresses his extreme sadness.

Baisakh 12 ko Madhyannakalin Binashkari Utpat Bhoge pachhi is the essay about his feelings during earthquake that we all faced about 4 years ago. I completely agree with writer's opinion that we didn't get to experience that much loss as compared to others who lost their family members and their assets, who lost their own life. So we are obviously very lucky at this point. Hence, I also conclude with the writer that what I suffer post-earthquake was nothing compared to lot of other people who lost everything they possessed.

All of the essays are informative and enjoyable to read especially for the young generation like us.  By going through his work, I have realized his every literary journey, involvement and his passion for literature is similar to a pilgrim’s devotion to god. Probably due to this he has his book entitled as pilgrimage which is very suitable. Similarly, the translated book's title Aaradhana has clarified the way he has been taking his work as devotion and worshipping his daily reading and writing. I highly recommend this book especially for youth.

(Wagle is an emerging writer)

Shova’s book is a collection of 25 medium-sized stories. The stories keep readers engaged, draw them into another world, and... Read More...

I was fascinated to read about human resource management in Bhutan and the hydropower project examples provided there. Information on... Read More...

The basic flow of the story goes from introducing the topic and exploring the extent of modernism through a philosophical... Read More...