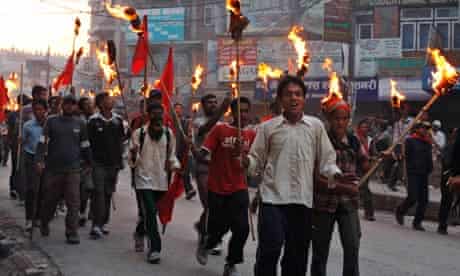 If we compare the development  performance under the Panchayat Raj from 1960 to 1990 and that under the multiparty system from 1990 to 2020, there is no indication that things have really improved in the post-democracy period in terms of job opportunities, living standard, physical infrastructure development, agriculture development, institutional and industrial development, control over corruption and maintaining law and order.

A series of slogans were chanted by the people on the streets against the autocratic rule of monarchy before1990, the year democracy was restored in Nepal. Some of the people who gathered in a series of protest programs organised by the so-called political parties were affiliated to their respective parties while others were the common poor people who were completely unknown about the outcome of their protests. They were attracted mainly by the fake agenda of reducing social and economic inequality, controlling corruption, making law and order institutional and maintaining equality to all the people in terms of opportunities and so on. They all had expected to taste the fruits of democracy. The slogans among other things included eradication of poverty, housing programs for homeless people, and provision of land for the landless. People had participated in the protest programs for the restoration of democracy hoping for a better future.

What went wrong? Democracy itself did not respond to the agenda set by the political parties. People were dissatisfied and depressed with the misdeeds of the leaders who commanded the political parties. Wrongdoings were rampant. Nepotism and favoritism ruled over the entire system. Talents began to migrate in search of better opportunities. Unemployment was rising. Livelihood became difficult for a large number of people. A section of people, popularly  known as Maoists, launched an armed struggle within the period of 1996-2006. People began to support them.

On february 17, 2007,  I expressed my views in The Himalayan Times about the vacuum of   plan, program and their mode of implementation. “After nearly a year of political stalemate, people are anxious to know about what development paradigm will be adopted. A collective effort has been made to propose practical alternatives that could help change the present course of affairs and better serve the people’s interest. Reduction of social inequalities, prevention from risks of environmental hazards, restoration of a sense of justice, confidence among conflicting groups and opening up of a new future for Nepalis are the key objectives to be prioritised while building a new Nepal. The next objective is the transformation of social and economic values that reduces growing dissatisfaction among the people.” These were the commitments promised by the leaders of political parties to deliver to the people.  In addition to this I warned about the consequences if the commitments promised by the leaders of political parties failed to deliver over the period of time.

“In course of time, people may doubt their leaders’ commitment to establish a new Nepal by materialising and transforming people’s aspirations into national development. They might believe the commitments to be empty slogans as there exists a reluctance to execute the objectives prioritised after the April uprising against the King’s autocratic rule”.

The warnings issued nearly a decade and a half ago are coming true today as the leaders of the political parties had common slogans  about overcoming the long-standing burning issues inherent in the Nepali society such as political instability, social discrimination and economioc inequality along with controlling the rampant corruption in order to overthrow the monarchy. Even after the overthrow of kingship more than a decade ago, these commitments not only remain salient but also thrown into the trash can. Political leaders have largely deviated from their commitments.  And it is evident that there hardly has been any positive results which, of course, means there has been no improvement as regards to the longstanding burning issues. Things that the leaders of all political parties committed to change remain unchanged. Inequality is rising. Political chaos has continued. Corruption has been institutionalized. The law and order situation is not very good and has been becoming worse all the time. Racial descrimination remains unchanged.  Jobs are unavailable for those who are rampantly unemployed. People have no alternatives except to migrate  to be employed to maintain their  livelihoods resulting in a mass migration of youths irrespective of their skills and qualifications elsewhere around the world. On the other hand, the entire situation over this period has not improved but is becoming worse if anyone considers the promises made by the leaders of political parties.    There is a lot of  evidence that almost all leaders of all political parties have a single ambition to climb up the highest political power ladder without having a plan and program for making Nepal healthy and prosperous.

From the time democracy was restored, the livelihoods of poor and marginal people have become worse. The fruits of democracy have been tasted by only a few. If one wants to become prosperous in relative terms, one should be a  political activist. Only those who are actively involved in politics are likely to be able to taste the fruits of democracy. In this sense, politics has become the highest-return sector or occupation compared to the rest of the occupations. Politicians are comparatively richer than other people in society.

If we compare the development  performance under the Panchayat Raj from 1960 to 1990 and that under the multiparty system from 1990 to 2020, there is no indication that things have improved in the post-democracy period in terms of job opportunities, living standard, physical infrastructure development, agriculture development, institutional and industrial development, control over corruption and maintaining law and order. Institutions are politicised. Talents are migrating because of the lack of absorption capacity on the one hand and prevailing of widespread nepotism and favoritism on the other.