A schoolgirl writes a painful letter 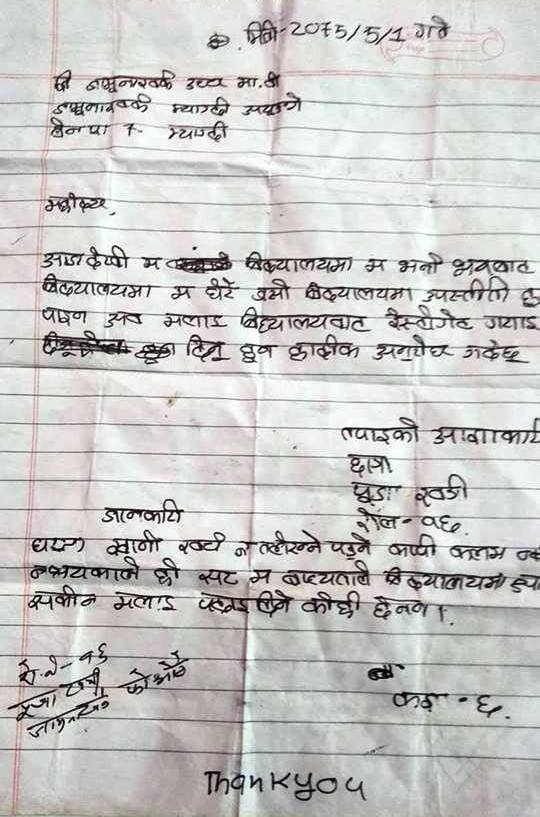 Unable to tolerate her drunkard father's regular mistreatment and thrashing, her mother left him for a second marriage. Since then, 12-year-old Puja Khatri of Beni-6 has been living with her grandparents, who have to beg for a living. As she had to look after her grandparents ever since her mother left , she could barely manage to go school on a regular basis.

As her father is immersed in alcohol day and night, her grandfather Man Bahadur begs in the village and nearby market areas for food for himself, his wife and their grandchildren. Puja has three younger sisters and a younger brother. She says there is not a single day she and her siblings have slept on full stomachs.

“When my father does not seem to care about anything except alcohol and my grandparents have to struggle hard just to manage food every day, there is no question about managing other things,” she said.

After her grandparents could not manage textbooks and school uniform, she realized she could not go school anymore. Then, she wrote a painful letter to her school principle Somnath Dhungana that she can no longer continue her studies.

She further wrote, “I cannot afford to buy even copy and pen. I don't have school uniform. Plus, I cannot go to school on an empty stomach.” She also stated that she could not take her first term examinations.

She said her family condition does not allow her to go school . She decided to write the letter after the school continuously asked her to attend on a regular basis. Her school asked her to attend regularly as her first term exam was fast approaching. Upon the school's repeated request, she has taken her exam. “She wrote me the letter after she was left with no choice. She also expressed her worry in the letter that she was not likely to fulfill her wish to study well and pursue higher education."

“She can do well in her studies if she gets a favorable environment. She has been forced to do household chores at the tender age due to family situation,” he said. He said her letter has really moved all the school staff.

Dhungana informed that the school has handed over her letter to Ward Chairman Krishna Bahadur Baniya to make arrangements so that she can attend school on a regular basis.

KATHMANDU, May 24: The Patan High Court has ordered Grande International Hospital to pay Rs 3.5 million in compensation to... Read More...

KATHMANDU, May 24: The waste collected in the Kathmandu Valley was dumped at the Banchare Danda Landfill Site for the... Read More...

KATHMANDU, May 24: A delegation of 15 student unions today called on Minister for Industry, Commerce and Supplies, Dilendra Prasad... Read More...