A profitable switch: From cow farming to buffaloes 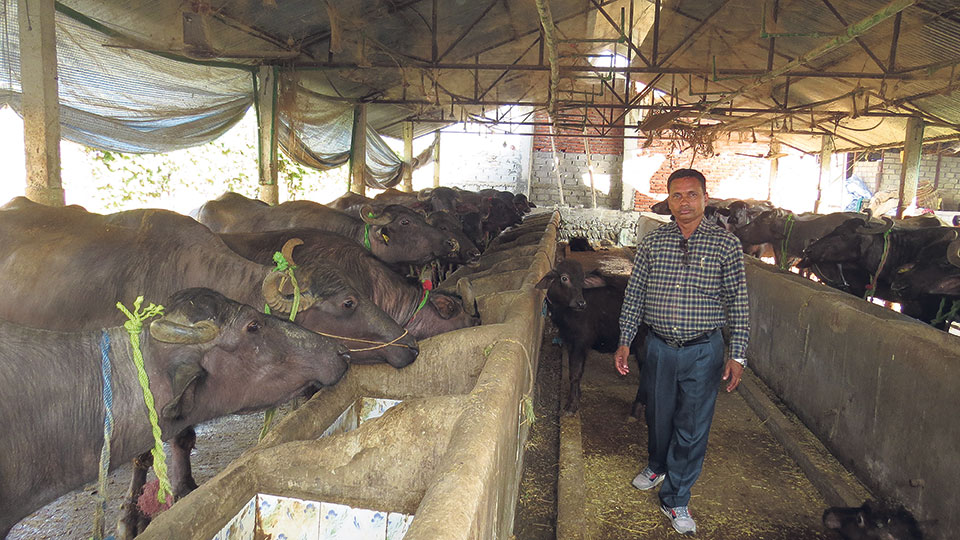 CHITWAN, Dec 23: Hari Prasad Neupane of Rajhar Ward 13 of Debchuli Municipality-Nawalpur used to keep a sizeable herd of cows at his farm. Also a known politician in the area, Neupane wanted to earn money through cow farming. But instead of making profits, he made losses.

However, he did not lose hope and switched to buffaloes two years ago. He now keeps 95 buffalos in his Tangikot Animal Farm located at Rajhar. Earlier he used to have 50 cows in his shed.
“Buffalo farming is more profitable than cow,” Neupane shared his experience.

“Cows needed extra care and the medicinal expenses required extra investment. If cows did not get proper care, they would give less milk. A little lapse in their care might even lead to their death,” he said.

“I faced losses of Rs 4.5 million within two years of cow farming,” he added.  One day, he decided to take away all his cows from the shed and leave it empty for a year. Then he started keeping buffaloes.

“Within three months I purchased 50 buffalos. Currently I have 95 buffalos in my shed,” he added.
Buffalo milk is richer in fat and buyers come looking for his farm to buy milk.

“I am delivering milk to a large area, up to Kawashoti and Gaidakot. Most of the people come to the farm only to buy milk,” he said. Currently he is selling 500 liters of milk per day. While the cow milk could hardly be sold for Rs 50 per liter, buffalo milk is easily sold for Rs 75 per liter, he told Republica.

“Generally I am earning Rs 1.1 million per month. Deducting the expenses, I earn around Rs 450,000 a month,” he said. “I am very much satisfied with my earning and occupation.”

Neupane is planning to add more buffalos to his farm. He had invested Rs 10 million to build the buffalo shed and Rs 20 million to buy buffalos. Part of the money came from government grant and part of it came from bank loan, he said.

In one year, he sells buffalo dung worth Rs 1.2 million to Rs 1.3 million. “No fertilizer is better than dung. So people come from wide and far looking for it,” he said.

“Medicinal expense for buffalo is very low in comparison to cow,” Neupane said, adding that he has spent only Rs 40,000 on the buffaloes’ medicines in two years, while he used to spend hundreds of thousands each month for cows.

JUMLA, May 26: With a sudden increase in the number of schools in Jumla, the trend of hiring private teachers has... Read More...

KATHMANDU, Dec 3: The election campaign was a proof to show the extent leaders went to lure voters. From milking... Read More...