A page from my EBC trek diary 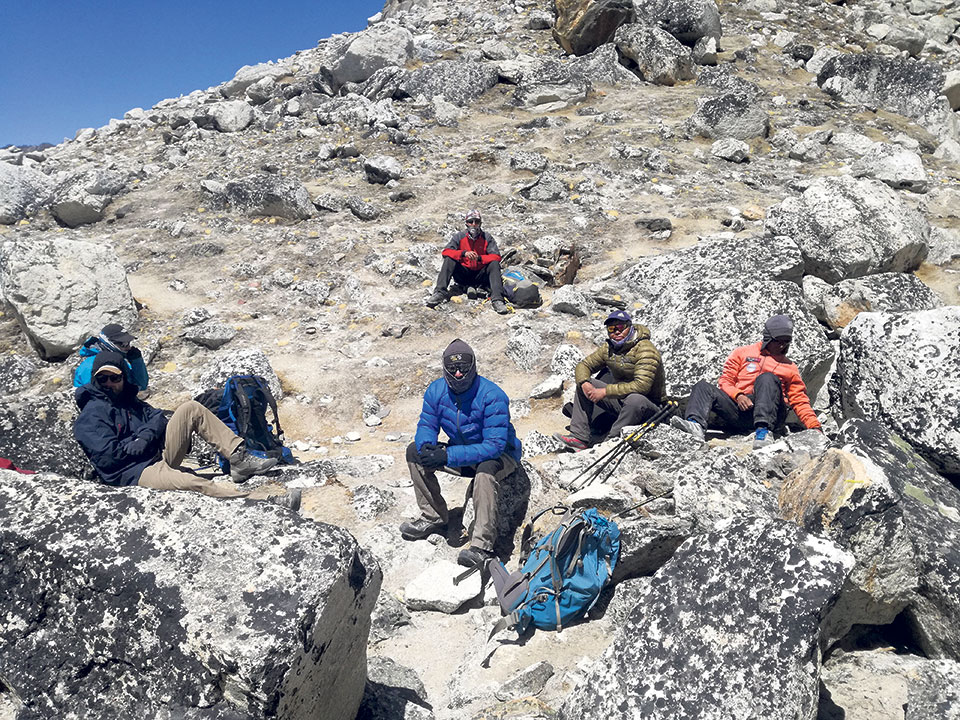 As a part of the glacier on our east shifted slowly but steadily, the huge mass of ice broke into several small fragments forming structures that looked like baby mountains. These ice blocks form a good site for practicing ice-climbing for beginners in climbing and amateur mountaineers before setting foot upon the notorious Khumbu icefall, which forms the most conventional route to the Everest from the southern side.

Behind me was Bradley Roljic, a towering disciplined Australian from Perth who was going to climb Ama Dablam but was at EBC for a few days in order to acclimatize prior to attempting to scale the mother of mountains. Closely behind, walking with firm steps, was Peter, a Swedish climber who had come for his second attempt of Everest, having had to come down from camp two because of pneumonia in the previous year. Lugging along was Bipin, a Nepali climber who had come for the Everest Marathon a year before and decided he wanted to climb Everest this year. Add a few guides to this eclectic mix and you have our whole group for the hike to Pumori high camp.

Some porters fetching water passed us as we slowly walked past the Adventure Consultants (previously owned by Rob Hall who passed away in an unfortunate disaster in the Everest in 1996). I had just finished reading ‘Into Thin Air’ and it was interesting to see their camp. Mountain Madness, whose founder Scott Fisher died in the same disaster, had camped further beyond our own camp in the opposite direction.

Having been in the Everest Base Camp for more than two weeks, the zero point of the base camp felt much closer than ever before. Because it was still early in the day, not many trekkers had already arrived and the Trekker’s rock was unusually quiet. As Peter and Bradley closely followed our guide, I tried to trace their firm, trained steps so that I would not fall behind. During treks I made it a point to take slow steps and dressed just enough to keep myself warm without feeling sweaty. This can be tricky in the higher Himalayan trails here one has to fend the harsh winds while avoiding getting too warm from the stronger sun rays penetrating through thin air.

Achu Lakpa is a seasoned mountaineer. He carried us forward in the manner of a climbing regiment with no frequent breath-catching stops. He did tell us to look back now and then towards the east where the base camp had started to look like a tiny disarray of colorful tents. The Everest is completely obscured by the west shoulder as one looks to the east from the base camp. One of the reasons the route through the Khumbu icefall has been said to be the safest this year is because it lies mostly away from the western shoulder (the source of the avalanche in 2016 that killed 16 people) and is closer towards Nuptse most of the time which is relatively more calm.

The usual nature of high mountain ridges is that a narrow trail meanders through a daunting vertical face and one slowly makes way through it, slipping on the scree, finding one’s balance, huffing and puffing not looking so much at the destination ahead as at the path beneath. A relatively sunny weather, gentle breeze, a calm and patient temperament, good hydration, and the right amount of layers help keep the climbers going.

The first stop was luckily before the steep scary ascent. We layered up, drank some water and stared back at the enormous shape of Mt Everest appearing slowly behind the western shoulder. At Everest, people come up with ways to do something new on the same mountain every year to set a record. I believe that the courage to set foot upon the Chomolungma (Tibetan name for the Everest) is in itself a great achievement without any extra accolades and adornments of being the fastest, scariest, tallest or shortest climber.

Being able to keep pace with my fellow Nepali climber misled me for a while into thinking that I could probably attempt to climb the Everest myself someday soon. Around the same time, almost as if to give a blow to my ego, the slope started to abruptly steepen, and the wind grew harsher.

Although I was no mountaineer myself, I kept admiring Bipin’s indifferent courage as he was going to attempt to conquer Everest on his first ever experience at the mountains. Compared to him, I was feeling lucky that my highest climb this season was going to be over in a few hours. I slowly decided that mountain climbing is an enormous feat and I was in no shape yet to even think about it, despite my training with rope-work, ice-climbing and glacier rescues. I would need to build enormous patience, stamina, and aptitude and all of that might take ten years. I was experiencing the limits of my physical tolerance. Sheer will power and florid imaginations, while probably necessary, are not enough to reach the top of the world.

Finally, after hours of strenuous walking, the mighty Pumori lay on right. As we approached the final spot where the rest of the team was waiting for us, the sun was still shining. The guides explained to us the course the destructive avalanche of 2015 had taken, arising from Pumori and wreaking havoc and annihilation upon the Everest Base camp.

We rested and ate a little before it was time to descend. It usually takes two hours to cross over to the zero point (trekkers rock) on the other side. But at a distance of about 35-minute walk from the camp, I made a bad decision to break from the rest of the group to help another friend find a particular guy who fixes internet across the base camp. By the time I reached our camp, hungry and wasted, it was snowing heavily. I had lost my sense of direction in the treacherous glacier and it had taken me twice as long as usual. Brad fixed me a hot lemon drink and I slowly regained my spirits. I was exhausted beyond anything imaginable and started brooding upon my lessons of the day. All I could conclude was that I was proud to have survived the day and the fact that I could now tell the tale of my little adventure.

The writer is a specialist in orthopedics and trauma surgery. He also holds a diploma in mountain medicine.

Though Nepal occupies only a minute space within Asia, its geographical diversity provides an ample of adventure possibilities.  The world... Read More...