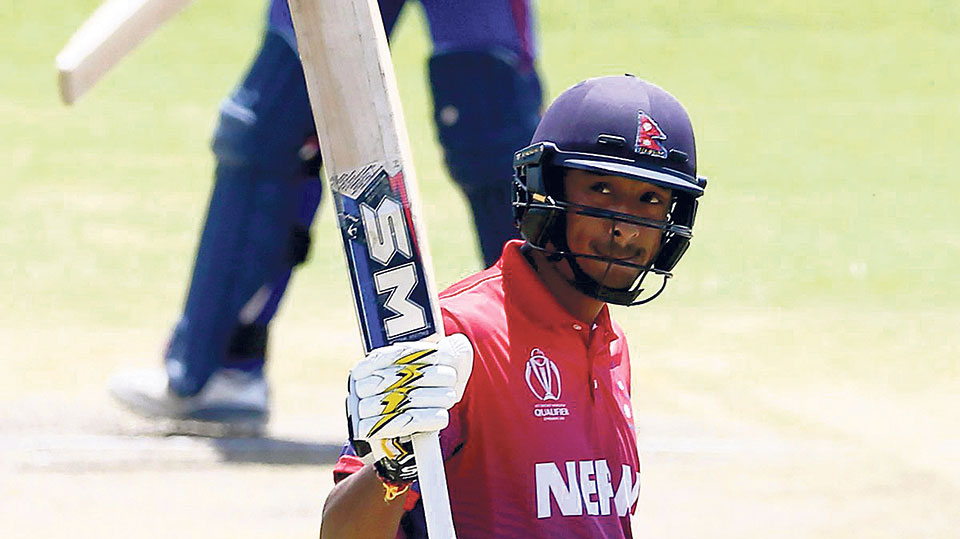 KATHMANDU, Aug 5: Nepal cricket team captain Paras Khadka was a relieved man when his team survived a cliff-hanger match and won it by a run in the last ball against the Netherlands in VRA Cricket Ground, Amstelveen on Friday. It was the second and final match of the series. Nepal needed six runs to complete their maiden win in ODIs, when the skipper took the responsibility to deliver the last over.

Nepali players and fans, both present at the ground and watching on screen, breathed a sigh of relief after witnessing another last-over finish from Nepal national team this year.

"To the fans, I know it is very hard to get that nail-biting finish. We knew it was just a matter of one ball and it went down to the last ball; he hit it, hit the stumps, I got the ricochet, all I knew was that I had to pick up the stump and the game would be done," said Khadka after the match. He added: "It feels great. We have sailed past Division Two and world qualifiers and have now registered our first win."

The skipper also emphasized on becoming stronger from the experience and gaining strength for future matches. "The way we did today shows a lot of character within the team. For us it is very important that we keep improving from here,” said Khadka. He added: "As a team, we are obviously very, very hungry and we want to perform, we want to be there and it is just the beginning.”

In the ICC World Cricket League Division Two clash earlier this year, Nepal and Canada needed just one win to seal a spot in the ICC Cricket World Cup Qualifier 2018, which took place in Zimbabwe in March. A brilliant 51-run stand for the last wicket between Karan KC and Sandeep Lamichhane took Nepal to a dramatic one-wicket win then. It wasn't the first time they had done something similar either.

However, the skipper understands the demanding nature of ODI cricket, and says Nepal would need to improve drastically to keep the winning spree going.

"Fortune favors the brave and I've been saying this for a while. For us, it is very important that we keep improving from here," he said.

Meanwhile, encouragement from fans of Nepali cricket remains one of the fundamental motivating factors for the national cricket team during their foreign appearances. The support from the fans has always inspired the national team to do well even in adverse conditions. The captain gave a large share of the credit for the team's success to them.

"I think the fans are incredible to stay on ground the whole day. Our fans manage to come over and support us, not only in the Netherlands, but almost everywhere in the world we go." he said. He added: "The fans are very, very vocal. We can hear them as we are batting and bowling on the field and that really motivates us. For us to get our first victory, to celebrate it among them, adds it up and like I said there will be more victories, more champagnes, more cheering, and lot more smiles."

After leveling the series in the Netherlands, the cricket team will now participate in the Asia Cup Qualifiers. The venue for the qualifying event for Asia Cup 2018 was shifted to Malaysia, where top six Asian associate nations will compete to earn a spot in the forthcoming marquee Asian cricket event in September. The Asian Cricket Council (ACC) revealed the change in venue, from India to Malaysia, through their official twitter handle and website back in July end. The ACC Asia Cup Qualifiers will run from August 29 to September 6. Hong Kong, Malaysia, Nepal, Oman, Singapore and the United Arab Emirates (UAE) will compete in the qualifiers.

Nepal will play their first-ever One-Day International game against the Netherlands on Wednesday (August 1) but Paras Khadka, their captain,... Read More...