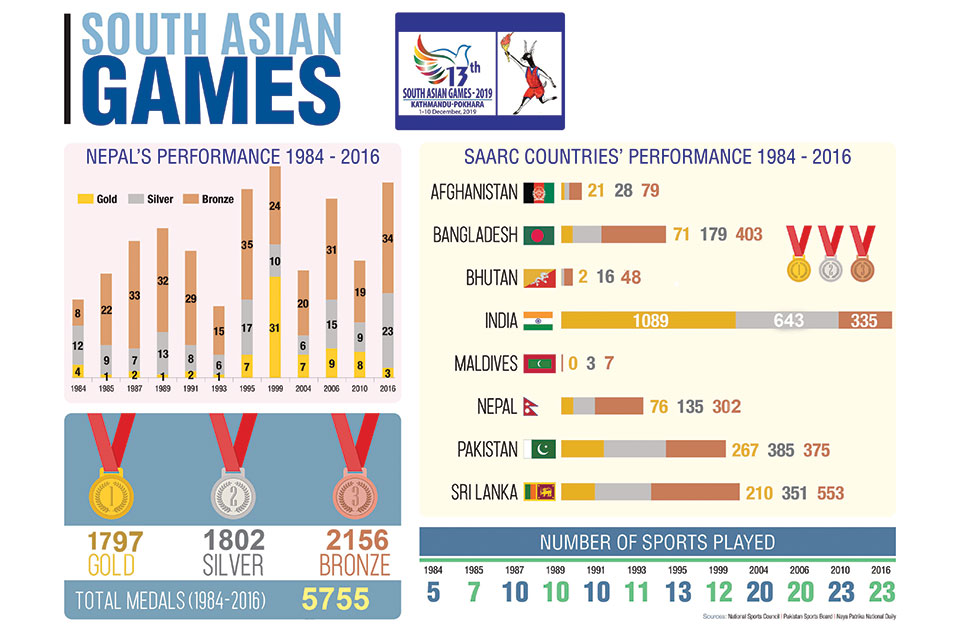 Despite being postponed for two times previously, the 13th edition of SAG is all set to go on from December 1 to 10 in Kathmandu, Pokhara and Janakpur. The Sports Minister, member-secretary of Nepal Sports Council, and presidents of major sporting bodies and associations have shown their solidarity to make events as successful as possible.

From 1984 to 1987 they were held every year except 1986, as it was a year of Commonwealth Games and Asian Games. From 1987 onwards, they have been held every two years except for some occasions. The 12th South Asian Games was held at Guwahati and Shillong from 5 February to 16 February 2016.

The first SAG were hosted by Kathmandu, Nepal in 1984.

As Nepal is set to host its third SAG event in its 29 years history, we revisit Nepal’s glorious past here:

1st SAG, 1984
The first ever organization of prestigious South Asian Games (SAG), then known as South Asian Federations Games, was no less than dramatic after Nepal took the responsibility to host it after the previously confirmed Bangladesh opted out citing various reasons.
Only five sports, football, boxing, athletics, weight-lifting and swimming, were included in the first edition which were held for six days from September 17 to 23, 1984 in Kathmandu. A total of 373 players participated in the event with Nepal’s 105 being the most. Nepal had more participants than India’s 98.
Nepal was praised for its organization despite rain being pertinent pain throughout the events. Out of available 185 medals, India topped the table with 44 gold medals, total 88, followed by Sri Lanka, Pakistan and Nepal in the fourth place with four gold and a total of 24 medals. Nepal won gold medals in athletics, boxing and football.

Football
Nepal defeated Bangladesh 4-2 in the final of the first ever football final in SAG. Nepal took the lead with an own goal conceded by Bangladesh which the visiting team equalized by Ahmed’s 35th minute strike. Nepal trebled the scoring in second half with Yaibi Ghale’s 51st and 68th minute goals. Suresh Panthi added fourth in the 53rd minute. Ahmed scored his second and Bangladesh’s consolation goal in the 87th minute. Nepal had defeated Maldives 4-0 and Bhutan 5-0 earlier in the tournament.

8th SAG, 1999
It took four years for Nepal to host the eight edition of prestigious SAG. The events which usually happens every two years, Nepal was unable to meet the deadline for various reasons. However, once it materialized, Nepal hosted a highly successful, on and off-field, SAG event from September 25 to October 4 in 1999. For the second time Nepal was given the opportunity to host games after doing the same previously in 1984.
Nepal collected 31 gold medals and finished second on the medals table behind India which continued to dominate bagging more than 100 gold in back to back editions. Nepal’s historic achievement, finish second which still stands as most highest Nepal has ever been, was largely helped by the fact Taekwondo and Karate were included in the games for the first time.
A total of 12 events were held during the games, which was two less than previous edition. For the first time in eight editions, the number of sports was decreased. Solely hosted by Kathmandu, athletics, swimming, football, boxing, weightlifting, kabaddi, wrestling, table-tennis, volleyball, shooting, karate and taekwondo were the events for the edition. A total of 1069 athletes participated in the events.

KATHMANDU, Dec 9: Gaurika Singh has eclipsed the record of all other Nepali athletes in the South Asian Games (SAG)... Read More...