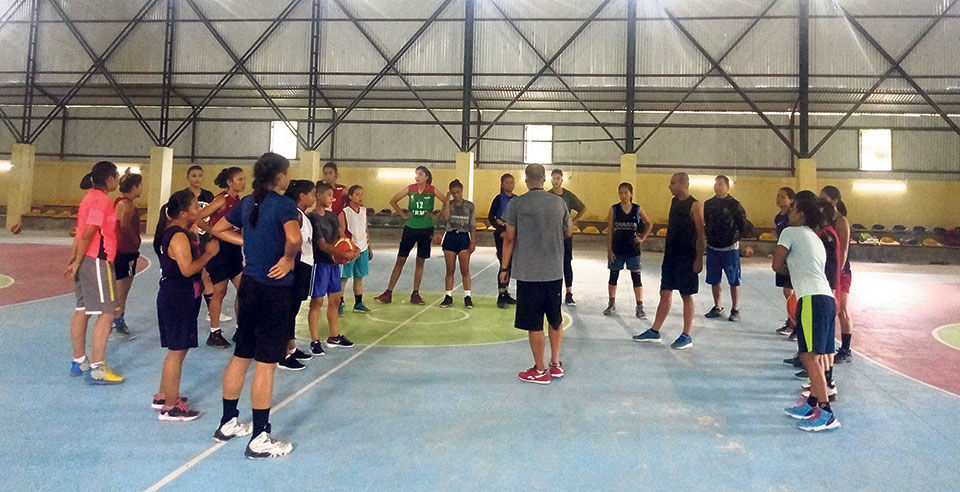 National women’s basketball team during a closed camp at the semi-covered hall of Dharan Stadium in Dharan on Tuesday. Photo: Rohit Rai/Republica

DHARAN, Aug 14: Nepal national basketball team is preparing in Dharan for around 12 days for the 13th South Asian Games (SAG) which starts on December 1.

The Municipality Sports Development Committee has already constructed the Indoor Basketball Court in the Semi Covered Hall of the Dharan Stadium. Both men’s and women’s basketball teams are currently in the closed camp from August 1.

A total of 32 men players and 25 women players are currently in the closed camp. This is the first time basketball is staging the closed camp outside the Kathmandu Valley as the men and women teams share the court in different times of the day.

Nepal women’s national basketball team member Sadina Shrestha, who is with the team since 2010, said that the players are only focused on the training for the SAG with the closed camp in Dharan. She has expressed her satisfaction with the training.

“Most of the players are from Kathmandu. We go home when we are training or we have some personal works in Kathmandu,” said Shrestha, who has also served as the captain for the team. “We only play, eat and sleep here. When we train outside Kathmandu, our only focus is in the game. The training has been very fruitful.”

The players are also have a provision of going to the Dharan Fitness Gym for their proper physique. “We have come here to train basketball for the first time outside of Kathmandu which has been going well so far,’’ head coach Dinesh Chandra Nakarmi said, “The players are only focused on the training. We have received good help from the Nepal Basketball Association (NBA) and the municipality.”

The training camp will run till August 30. An additional group of players will take part in the training mixing with the players from the first round of the closed camp.

Home advantage
India dominates most of the games in the South Asian region. It is also the top team in Basketball. But, after India, Nepal, Sri Lanka and Bangladesh have tough competition between each other.

Nepal is the second contender in every age group of basketball. Nepal can take the advantage and do better in basketball with the help of home crowds and home ground in the upcoming SAG.

According to the head coach Nakarmi, Nepal will be the title contender in 5-on-5 basketball after India. Nepal has set the target of winning the silver medal in the category.

However, Nakarmi is of the opinion that three to four months of training won’t be enough to win the gold medal. He said that Nepal will get the gold in any game it wants only when the government makes long-term plans and investment.

One coach and four players from Dharan
There are six coaches beside Nakarmi in the closed camp training in Dharan. Among them, one is Dharan’s Bikash Chamling Rai, who is the only coach appointed by the National Sports Council (NSC) for Province 1. He has made important contributions for the development of basketball in Province 1.

KATHMANDU, Dec 9: Gaurika Singh has eclipsed the record of all other Nepali athletes in the South Asian Games (SAG)... Read More...

Smart lockdown to be enforced, int’l flights to resume
1 hour ago

IN PICS: Flood wreaks havoc in Melamchi
19 hours ago

Nepse on a freefall of 52.41 points following Sebon’s caution notice
19 hours ago

Chitwan extends prohibitory order for a week
59 minutes ago

Smart lockdown to be enforced, int’l flights to resume
1 hour ago