Parents' battle to save 11-month-old daughter

They have raised 25 million rupees so far

KATHMANDU, Aug 21: Her eyes were expressive even as a newborn. Compassion and purity in abundance; this was what the mother felt when she held the tiny life in her arms. Does every baby girl look so enticing or is she obsessed because she’s her daughter? Wondered Aleena Gurung Shrestha, 26. The innocent life however did not keep her happy for long. Siyona Shrestha, now 11-month-old, will die within the next few months if a rare disease called spinal muscular atrophy (SMA type- 1) is not cured. And the cure is expensive. The family needs at least Rs 250 million ($2.3 million) for the treatment.

"We are expecting a miracle," said Sandeep, Siyona's father, a pediatrician. "We are helpless, the treatment is available only in the USA, and the cost is beyond our reach." 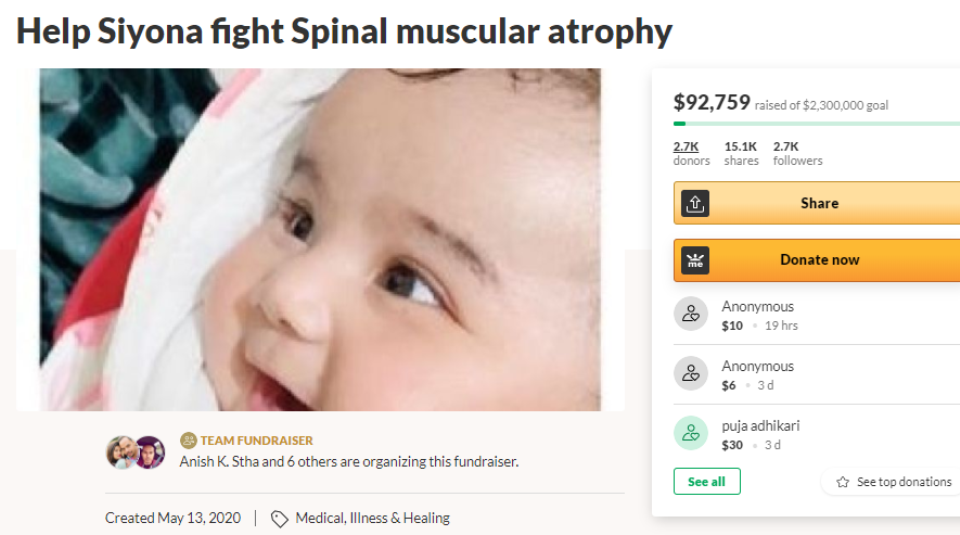 He is reluctant to tell strangers that he reads Hanuman Chalisa every morning these days. A carefree man otherwise, who hardly entered temples to impress the deities, now offers water to Suryadev daily. The routine started some three months ago. Visits to astrologists and fortune tellers also became frequent as he wanted to leave no chance to fix things for their daughter. Sandeep is surprised over his own transformation -- from a modern, science-guided doctor to a helpless, humble soul, begging for the Supreme's intervention. The change was a byproduct of the unimaginable situation life suddenly threw at him and the remedy was only expanding his beliefs.

'I wasn't into God or a firm believer. Perhaps a father would go to any extent to save her daughter; I have a lot more to do to save her' he sounded determined. His voice choked quite a few times, as he shared the story over the phone with Republica on Wednesday.

When the nation went into a lockdown for the first time following the threats of COVID-19 outbreak in March, the couple was battling to digest the newly announced shocking health status of their only child. Though both are medical practitioners, the disease was never heard of. But it was already making their cheerful, adorable daughter weaker by the day. Aleena is a nurse.

"We consulted many doctors and surfed the Internet to gather knowledge about the disease. There is not much awareness about SMA, which affects one in 6000 to 10,000 people," said Sandeep.

August is marked as SMA awareness month. SMA is a progressive genetic disorder with different types and severity. It affects the nervous system and muscles, making it hard for the patients to breathe, swallow or function normally. It's not a friendly term even among doctors, according to Sandeep. "Given our health facilities or access to doctors, especially in rural areas, I feel that our children silently die under its effect even before SMA is diagnosed," he notes.

Siyona was a 'happy baby' until she was three months old. Then Sandeep and Aleena noticed that she was not able to hold her head as normal babies do as they grow. The family, based in Bhairahawa, Province – 5, took her to the best facilities around for tests. MRI and other reports initially relieved them.

"The tests showed that she was alright. We thought perhaps her growth is a bit delayed, that's all," reported the father.

But Siyona's physical activities did not improve. The family then came to Kathmandu and a senior pediatrician Bina Prajapati was consulted. She said that Siyona has SMA. She was six-month-old at the time. 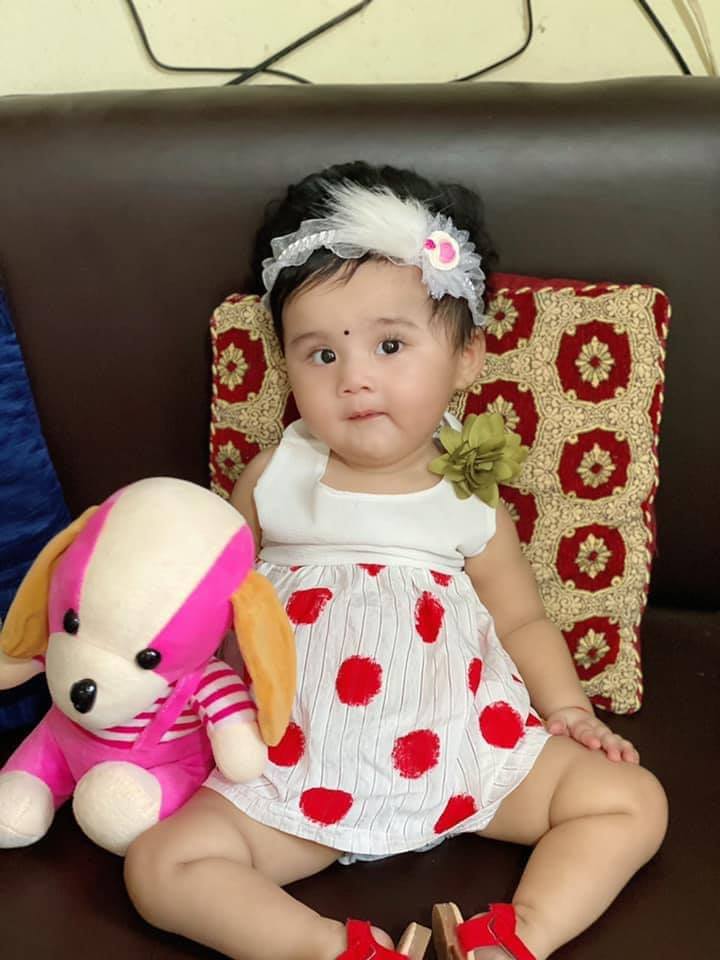 "We left for Bhairahawa. The government imposed lockdown after two days, and we got her blood report rather late," Sandeep reminisces.

"We saw the report, and couldn’t believe our eyes. My wife broke down in tears; I was in a state of denial. I wanted further confirmation and sent her blood sample to India."

Due to the lockdown, there were hassles. Sandeep requested wherever it was needed, searched for someone he knew from across the border in Bhairahawa, handed him over Rs 16,000 Indian currency and sent him to Sanjay Gandhi Post Graduate Institute of Medical Sciences, Lucknow. It would not take more than five to six hours to reach Lucknow from the Indo-Nepal border, so it was safely taken there.

The couple was anxiously waiting for a reply. The doctor in India emailed him. And their hopes were dashed!

"I cannot explain what we went through that day. He had clearly written to us what our baby was facing. She had not yet shown worrying signs, but the letter betrayed us," he recalls. 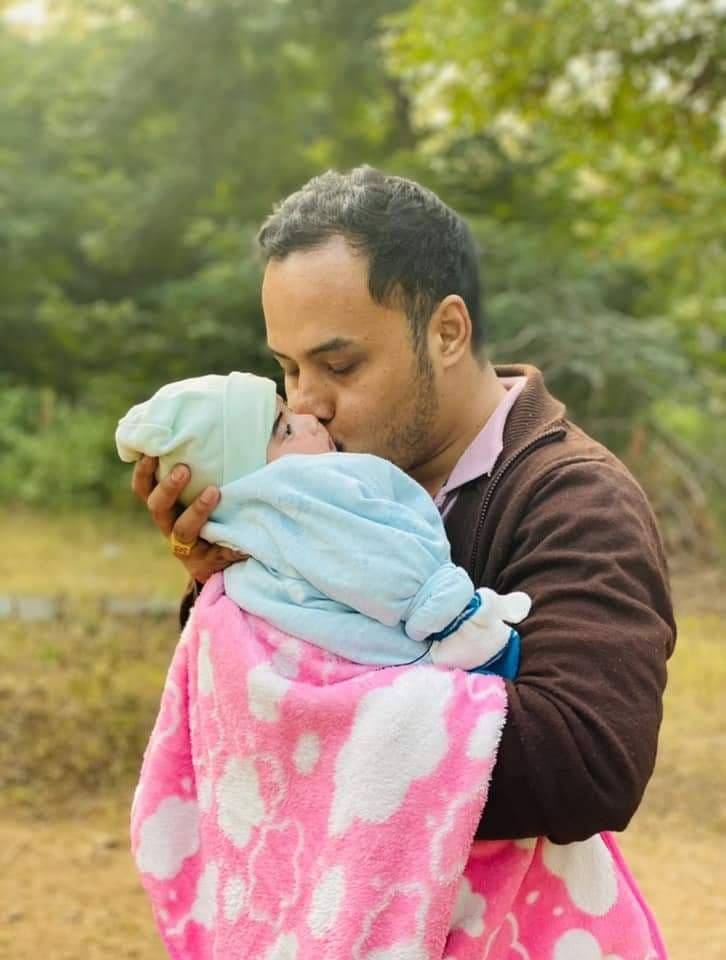 The doctor also told the parents about the available treatments and asked whether they can afford them. The doctor told them about equipment that could ease the baby temporarily, as she was on the verge of multiple system failure.

The news devastated the mother. She would not let the love of her life pass away in front of her eyes. Sandeep's parents and in-laws insisted on something that could cure the baby 'as the father himself was a doctor!' Cousins, friends and relatives asked if they could be of some help. The pressure to save the baby was mounting but Sandeep was helpless. Even if he sold off all his assets and took loans, the amount was too big.

"I was the one that was earning better; my parents had begun to pin some hopes on me. My wife comes from a humble background. Arranging such a big amount was not even thinkable. But they all would look up to me and I had no shoulder to cry on," Sandeep said.

Too much grief and restlessness led him to try fundraising options. While visiting different sites, he had come across similar stories from different parts of the world.  If it can work for others, why not for Siyona? He wondered.

"I then decided to ask people for help. I don't know what else I should have done!"

Thanks to his generous relatives and cousins, they take care of digital dealings and the campaign 'donate for Siyona' is underway on GoFundMe and in several other platforms. 'Team Siyona – SMA,' a public group on Facebook already has 22.3K members and thousands of people have expressed their love and blessings for the baby. Many have contributed and the collection is  25 million rupees. The 'cyber team' of the family posts a note of gratitude to each contributor.

"This is probably the first ever fundraising of this scale for any child in this country, I haven't heard of this before," said Manjula Shrestha, Sandeep's relative. "I am amazed by the spirit and courage shown by the parents, we all should help," she added.

Siyona's room these days is like a mini hospital. There are several tools to help her breathe and cough. Parents and other elders in the family look after the fragile body round the clock and the bonding has only deepened.

It is not a matter of days or weeks for Siyona to recover if the fund is arranged. Gene therapy drug called Zsolgensma can make the baby better in just a few hours.

According to the couple, the money they have been raising for their baby girl will go to other helpless children if they lose Siyona. They want to establish an SMA foundation in Nepal, and even if Siyona is cured, the extra money will go to the same cause.

"We have kept all the transactions transparent. It's quite systematic, and contributors have access to that. We hope for the best, but if we lose Siyona, the fund will be used for other children like her," Sandeep stated.

In the last few months, he talked to several officials at the Health Ministry regarding SMA awareness and support to victims. But he was told that rare diseases are not the government's priority. Talking to Republica, Dr Phanindra Baral, section chief of Non-Communicable Disease and Mental Health Section of Epidemiology and Disease Control Division, stated that there's no fund allocated for diagnosis or cure of rare diseases. "This has not been included in the policy so far," he said.

Govt should be serious toward ensuring rights of children: Deputy Speaker Tharu

KATHMANDU, April 13: Even as the stakeholders concerned have suggested the government not to take any decision to suspend physical... Read More...

Animals are killed brutally time and again, but perpetrators are hardly booked
18 hours ago

Health ministry projects Nepal’s COVID-19 cases to surpass 600,000 with daily cases of more than 11,000 by next three months
11 hours ago

Remittance inflows up 8.6 percent in first eight month of this fiscal year
17 hours ago

Animals are killed brutally time and again, but perpetrators are hardly booked
18 hours ago